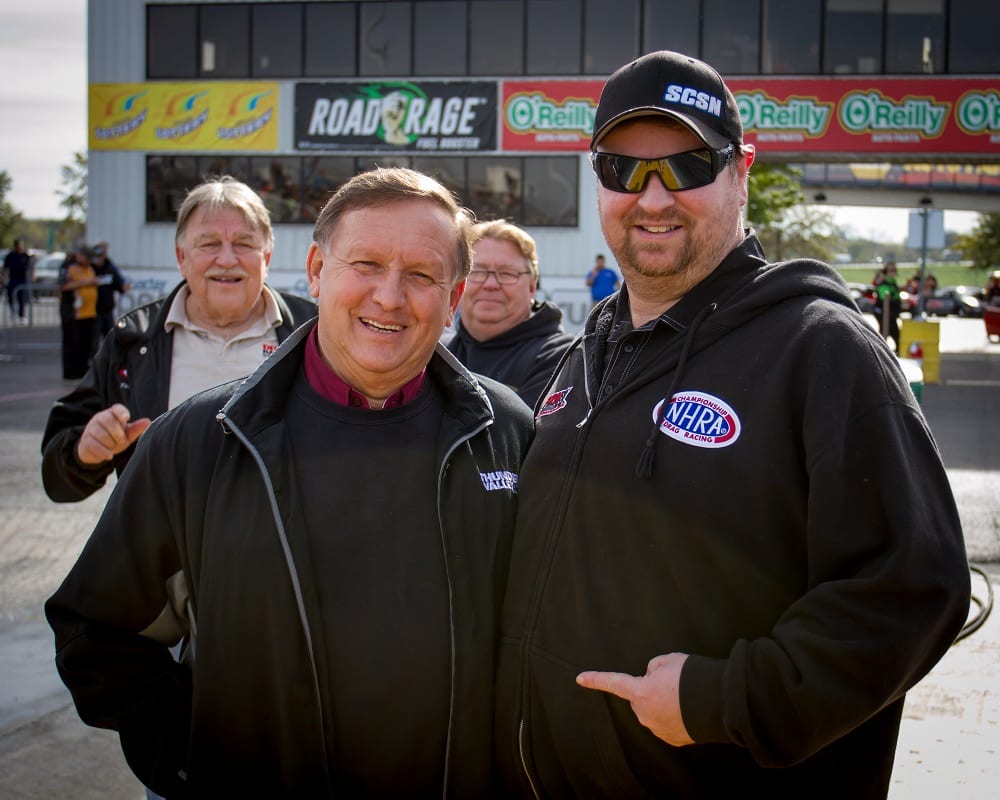 Some of the biggest names in doorslammer racing, including Keith Haney and three-time and reigning NHRA Pro Mod champ Rickie Smith, competed at last weekend’s ADRL Dragstock XI at Gateway Motorsports Park. But there was also drag racing royalty hanging out to watch the action as well.

Case in point – 12-time NHRA Pro Stock event winner and master engine builder Larry Morgan (pictured above, left, with DI’s Brandon Mudd) was on hand for the ADRL’s first race since 2013. “I just came to see what was going on here,” he said, watching Outlaw Pro Mods launch from the starting line. “I got a lot of friends out here, so I just come to watch.”

Morgan took the 2016 NHRA season off mostly due to his recovery from back surgery, but that doesn’t mean he’s been sitting idle.

“No, I don’t have anything to announce,” he said. “We’re building a 5.300-inch bore space engine, my son and I. Other than that, we’ve just been working on truck- and tractor-pulling motors, some Comp stuff, and just trying to put a deal together to come race.”

Over the span of this season, the Pro Stock class Morgan left behind at the end of last season has been absolutely dominated by the KB Racing duo of Jason Line and Greg Anderson. The pair were able to get a leg up on the rest of the field, who struggled with the new EFI set up. While drivers such as Alex Laughlin, Shane Gray, Vincent Nobile, and Bo Butner were able to even the odds, Morgan said it may be too late to save the struggling class.

“I’m not sure it’s enough,” he said. “I’m not sure there’s enough money out there to be racing that class anymore. I miss it, but it doesn’t make money sense to do it.”

The veteran drag racer said a partial schedule, similar to those run by the NHRA Pro Mod and Pro Stock Motorcycle classes, could be the answer, but pointed out Pro Stock still requires a massive financial commitment.

While not committing to anything, the Ohio native said he would like to be back at the track in some capacity next season.

“I’d like to be out here next year, doing anything, you know,” he said. “It doesn’t matter; I’m up for anything.”