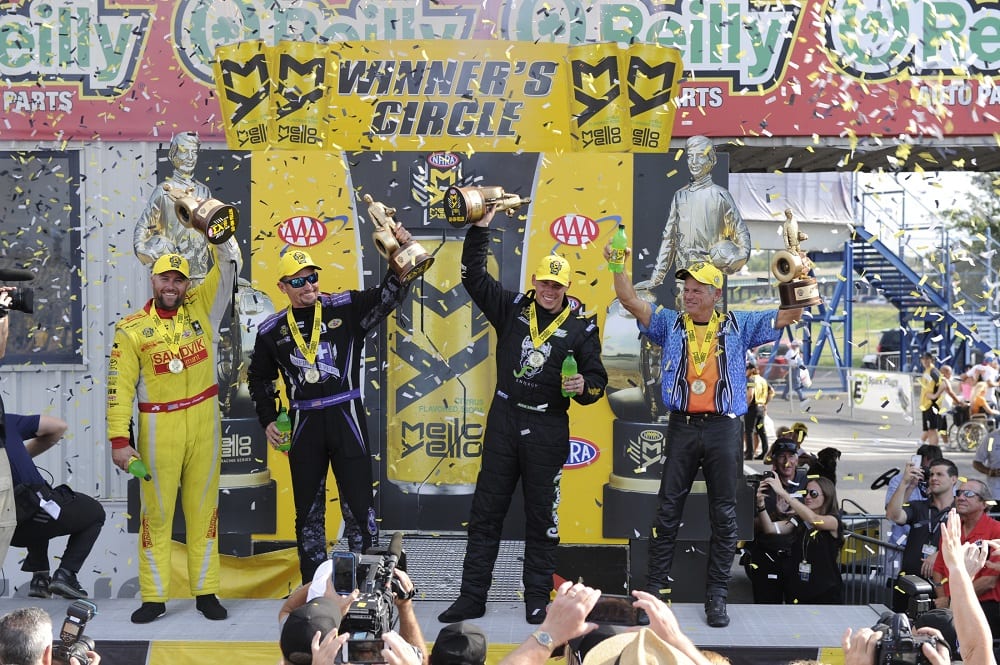 Shawn Langdon raced to his third victory of the year Sunday at the AAA Insurance NHRA Midwest Nationals at Gateway Motorsports Park just outside of St. Louis.

Langdon powered his Red Fuel / Sandvik Coromant dragster to a 3.798-second pass at 323.66 mph to defeat eight-time world champion Tony Schumacher’s 3.783 at 317.49 in his U.S. Army dragster on a holeshot. Langdon notched his 14th career win and first at Gateway Motorsports Park. The 2013 Top Fuel world champion moved to fourth in the points. He outlasted reigning world champ and points leader Antron Brown, three-time 2016 event winner Doug Kalitta and No. 1 qualifier Richie Crampton en route to the final round. 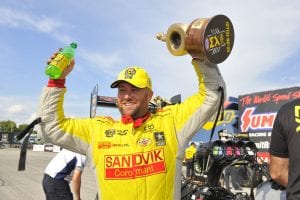 “We didn’t really have a dominant car in qualifying, but we just kept picking away at it,” said Langdon, who also won at Bristol, Tenn., and Norwalk, Ohio. “That’s what we’ve been doing since we got those two victories (earlier this year). The car has just responded well. All in all, this was a great team effort. The whole team did a great job and gave me a great racecar today.”

Brown held his grip on the points lead despite the early exit and is followed by Kalitta in second and Schumacher in third.

Beckman posted a 3.928 at 324.51 in his Infinite Hero Foundation Dodge Charger R/T to better Tommy Johnson 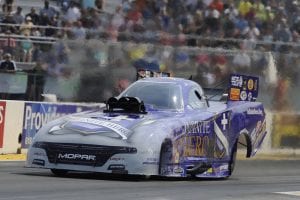 “Our team was in a slump and we did what was incredibly difficult with the way our car was acting unpredictably,” said Beckman, who won earlier this year in Chicago. “I’m not quite sure what changed, but I think I had a good outing as a driver today, the guys tuned smart and we turned on the win-light every time.”

Johnson Jr., who won earlier this year in Bristol, Tenn., raced past Las Vegas winner Alexis DeJoria, No. 1 qualifier Robert Hight and two-time 2016 winner Tim Wilkerson to make his fourth final round appearance of the season. Johnson Jr. jumped to second in the points standings.

In Pro Stock, Laughlin sprinted to his first career final round appearance and victory by powering his Gas Monkey Garage Chevy Camaro to a 6.611 at 208.68 to outlast Butner’s 6.637 at 209.26 in his Jim Butner Auto Chevy Camaro. Laughlin, competing in only his second year in Pro Stock, did not qualify for the Countdown to the Championship. He knocked down Seattle winner Aaron Strong, two-time 2016 runner-up Vincent Nobile and No. 1 qualifier Shane Gray before meeting Butner in the final.

“It’s an unbelievable feeling,” said Laughlin. “It’s not even real at this point. This has got to be a dream. The whole day has been a blur. Took it one round at a time and ended up coming up to the final. I was a little nervous but took a couple deep breadths and told myself, ‘It’s just like any other round, just go up there and do your deal.’ As soon as I let the clutch out, I knew my crew chief gave me a good car.” 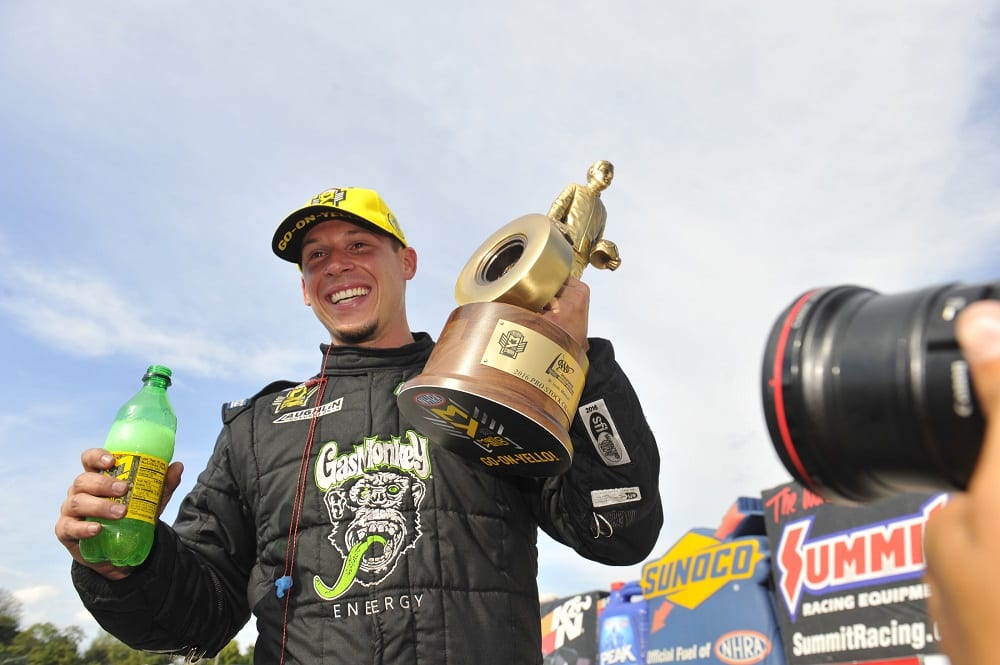 Butner, still pursuing his first career victory, earned his fifth runner-up finish of the season and sixth of his career with the performance. He raced past Mark Hogan, Indianapolis winner Chris McGaha and points leader Jason Line before losing to Laughlin in the final. Butner improved to third in points with the runner-up finish.

Alligator farmer and Pro Stock Motorcycle racer Jerry Savoie rode to his first victory of 2016 with a 6.933 at 189.36 on his White Alligator Racing Suzuki, defeating Angelle Sampey’s 6.852 at 195.85 on her Star Racing / Precision Service Equipment Buell in an all-Louisiana final. Sampey left the starting line early and red-lighted, giving Savoie the go-ahead victory. Savoie, who had not won a race since 2015 in Dallas, tallied his fifth career win and second at St. Louis. The victory moved Savoie up to fourth in the points standings.

“You go to the finals four times and win one, but out here the competition is so strong and it takes a little bit of luck,” 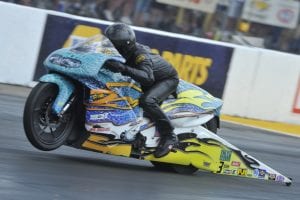 said Savoie, who outlasted veteran Steve Johnson, Matt Smith and rookie Cory Reed in the earlier rounds. “We got some luck in the finals. Losing hurts so bad, but winning feels so good. My team is a great team. Our bike is really consistent and we’ve had some issues, but today was our day.”

Sampey, who won for the first time since 2007 earlier this year in Englishtown, N.J., made her third final round appearance of the season by riding past Angie Smith, Hector Arana and Charlotte winner Chip Ellis. She moved to second in points.

The NHRA Mello Yello Drag Racing Series will continue with the 21st event of the season and third of the Mello Yello Countdown to the Championship sept. 29-Oct. 2 with the Dodge NHRA Nationals in Reading, Pa.