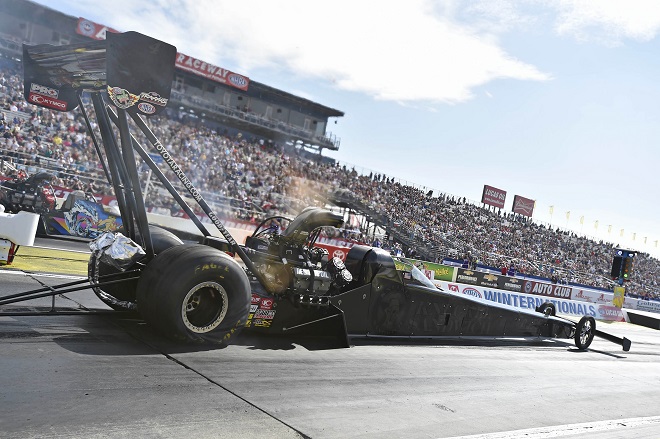 Led by Shawn Langdon’s astonishing 3.700-second all-time standard at the wheel of Alan Johnson’s “Knuckle Sandwich” Top Fuel dragster at the NHRA Circle K Winternationals, the Drag Illustrated Record List has taken a pounding in the first seven weeks of the new season.

Langdon eclipsed Antron Brown’s 3.701 thousand-feet pass from October 2012 but also beat Brown’s eighth-mile record by two thousandths of a second with a 2.965. At the NHRA CARQUEST Nationals at Phoenix, Brown returned the favor by erasing Langdon’s 293.22 mph eighth-mile Top Fuel speed record with an incredible 294.88 mph to inch closer to the stated goal of several Top Fuel crewchiefs to run a “two ninety-five at two ninety-five”.

Meanwhile, defending NHRA Funny Car World Champion Matt Hagan reset the eighth-mile FC speed record for the third time in four months with a staggering 278.35 mph pass at Phoenix on his event-winning 3.975/324.83 which was also the second-fastest speed in FC history.