“Little Evil” David Pearson reclaimed the Outlaw 275 Elapsed Time record in November, 2014, at 4.169. However, during a test session at Huntsville (AL), the North Carolina kingpin and crewchief Deron Lowery ripped a full five hundredths of a second from his own standard with a blazing 4.118 at 174.28. This makes Pearson’s 400-inch Bullet Racing Engines-powered ’93 Mustang the dominant machine utilizing a ProCharger centrifugal supercharger and the prime contender in the 2015 season’s OL275 events. Meanwhile, Jared Johnston continued his utter destruction of the restrictive world of X275 in 2015 by claiming the new DI ET Record at 4.445 to top the four month-old 4.463 mark of the New Jersey-based Bruder Brothers. After leading qualifying but stumbling on the semi-finals of the U.S. Street Nationals in Bradenton (FL) in February, Johnston came back to win the Lights Out 6 battle at Valdosta (GA). However, the Western Missouri racer’s CVM Technologies/KBX Performance/Pressurized Solutions Ford really made headlines at the well-attended first event for the new Radial Tire Racing Association at Northstar Dragway in Denton (TX). Opening with a 4.56 and a 4.50, Johnston’s “White Riot” single turbo-equipped, 400-inch ’92 Mustang made five out of six elimination runs in the “four-forties” to win the RTRA title while running over 160 mph on seven of eight passes! It should be noted Bruder’s single-turbo’d Mustang hit 4.466/160 and 4.457/160 during the race but fell in the opening round. 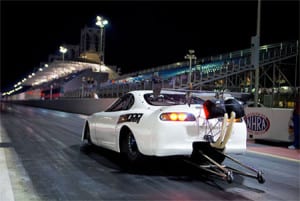 Many people in the industry are already calling it the “Run of the Year” but there is no denying Gary White’s destruction of the six-second barrier for six-cylinder vehicles earned an important place in drag racing history. Georgia veteran White, the official driver for Bahrainian Khalid Mohammed’s eKanoo-backed ’96 Toyota Supra, endured a solid month of “six-oh” passes at the Bahrain Circuit in Sahkir, (the team’s home track), including back-to-back 6.003-second blasts at speeds up to 244.90 mph. Finally, on March 5, White clocked a 5.972 at 240.57 mph to officially end a battle in which competitors from five countries fought for the honor of being the first under six seconds. The achievement gave Mohammed and the eKanoo team the undisputed global Elapsed Time record for both six-cylinder cars and eight-cylinder (nitrous oxide-injected) machines. Of note was the fact the 5.97 record-breaker included an eighth-mile, (3.942/191.42), which was still not quicker than the 3.934 pass recorded by White in the six-cylinder Titan Motorsports 2007 Scion at Martin (MI) nearly five years ago. The performance was accomplished with a three-liter, (183-cubic inch), Toyota inline 2JZGTE powerplant with a single turbocharger in a vehicle which weighs 2450 pounds. However, lost on many fans is the fact the car also rides on 33 X 10.5W tires and is now the second-quickest “ten-five” car only the planet. In fact, the eKanoo Supra is a mere three hundredths of a second away from “Bad Brad” Brand’s 5.942-second 10.5W record which has stood for nearly three and a half years! 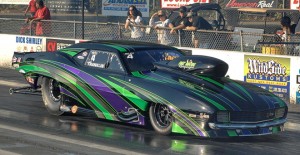 Tommy Franklin and Stevie “Fast” Jackson used the first event of the PDRA’s second season to move within striking distance of Bahrainian Khalid Mohammed’s thirteen month-old stranglehold on the top of the DI Pro Nitrous performance charts at 3.701/202.88 mph. After a 3.73/201.60 mph best on February testing at Bradenton (FL), Virginian Franklin’s Pat Musi-powered, Jerry Bickel Race Cars-built ’69 Camaro came out of the trailer at the PDRA opener with a stunning 3.715 at 201.16 before putting down five more runs between 3.73 and 3.76, (and a staggering total of six consecutive runs over 200 mph), en route to the event win. North Carolinian Jackson, who has occupied a spot in the DI Pro Nitrous Top 8 for more than a year, pushed his 942-cubic inch ’69 Camaro to the fastest speed ever clocked in North America at 202.73 mph on a losing run in the first round against Jay Cox after an earlier 200.74 during qualifying. At the same event, Tim Savell used Musi power to wheel his black 2012 Camaro to 3.720/200.56 and 3.75/201.25 to enter the DI Pro Nitrous ET and MPH Top 8 lists. 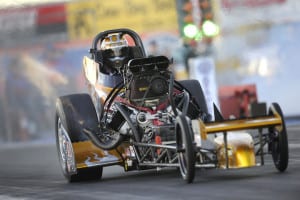 Tony Bartone made a huge statement while winning Nostalgia Top Fuel honors the 57th annual U.S. Fuel & Gas Championships at Famoso (CA). After a string of early shut-off passes under 5.60 seconds, the renowned New Yorker unleashed a 5.531 at 270.81 mph in the final round. Why was it a big deal? The pass returned the front-engined Top Fuel dragsters to the top of the Nostalgia racing heap after being a hundredth of a second slower than Peter Gallen’s 5.55-second Nostalgia Funny Car ET record since 2011!

The DRAG ILLUSTRATED TOP EIGHT lists do not include the eight quickest elapsed times or eight fastest speeds recorded in each class. The Lists also do not reflect the eight quickest or fastest vehicles. The DRAG ILLUSTRATED TOP EIGHT lists rank the quickest and fastest drivers in each Eliminator category. The DI TOP EIGHT rankings do not necessarily reflect the current National or World Records of any association. For current official world records, consult the sanctioning body or racing organization. Listings are not subject to verification or confirmation by any other runs. A claim to any record may be made by submitting all pertinent information and a photo or scan of a timeslip to [email protected]. Performances recorded outside organized drag racing events are accepted in all classes except NHRA Pro Modified, NHRA Pro Stock, NHRA Top Alcohol Dragster, NHRA Top Alcohol Funny Car, and X275 Eliminators. Testing results may be subject to additional scrutiny. DRAG ILLUSTRATED reserves the right to refuse any claim for any reason.