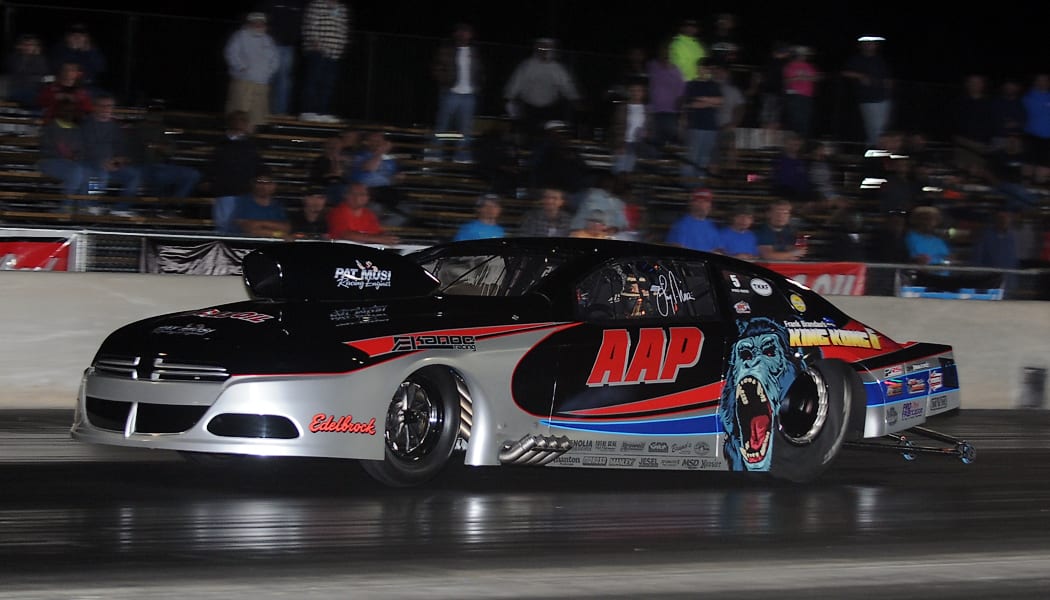 Lizzy Musi had held the Switzer Dynamics Pro Nitrous presented by MoTeC National MPH Record since May of last season. But after a wildly successful winter season overseas, she was ready to do it again.

Musi won two of the six races in the Arabian Drag Racing League series, becoming the first woman to win a Pro Nitrous event there. Her first event back on American soil, they took the car straight off the plane to Mad Mule at GALOT Motorsports Park. What happened next shocked them all, as she and “King Kong” went a 3.66. The Musi Racing Engines performance continued throughout the event and earned her the win.

From there the Musi team headed to the PDRA season opener, obviously expecting big things. They were not disappointed. She qualified second with a 3.70 effort, but the real magic happened in eliminations. In round one she laid down a 3.74 at an astounding 205.07 MPH. She backed that number up in round two, going 3.68 at 204.91, taking out teammate and reigning World Champion, Tommy Franklin. She reached her top MPH of the day in the semi-finals at 205.41, and then went on to runner up to Jay Cox in the finals, confirming a solid start to her season.

Lizzy is quick to give credit to her father Pat, owner of Musi Racing Engines, and her crew. “I wouldn’t be able to do this without my dad and my whole crew, and everyone working together to make it happen,” she thanked. “My dad works Monday through Sunday in the shop, always working on the program to make it better for us and our customers. Tommy Franklin is running fast as well. Everyone is starting to catch up so the new numbers are consistently in the low ‘70s. It’s crazy. Everyone is getting faster, which is pretty cool. We just gotta keep the ball rolling and try to stay on top.”

Pat Musi is not shy about the fact that he has worked hard to get to the top and plans to do everything in his power to stay there, not just for his daughter, but for all Musi Racing Engines customers. He says his partnership with Al Anabi Racing has aided in the growth of his program.

“We were able to test a lot through all of the races we ran in the Middle East,” Musi said, pointing to the reasons behind Lizzy’s success. “We kept up with our motor program like we always do. We’re ahead of any engine builder out there, and we intend on staying there. Three years in a row we’ve been in front of them and they’re trying to play catch up. We’ve got the bullseye on our back, we’re just working. Instead of running ads, instead of talking about it, we’re putting it up on the scoreboard

“We’ve got both ends of the record,” Musi added. Tommy Franklin currently holds the National ET Record at 3.677. “We’re pretty excited about the whole season this year. We’ve got some new stuff coming down the road. We’re stepping up in R&D. We know we need to keep working on our deal. We’re ahead and we’re going to stay ahead.

“We’re constantly developing our own stuff – cylinder heads, camshafts, motors. And our customers run good. It really comes down to the driver now. We have a performance advantage. We’re going to be tough to beat.”

“I do feel like I have a target on my back now,” Lizzy added, “but I’m just going to keep doing what I got to do and hopefully we can continue this progress.”