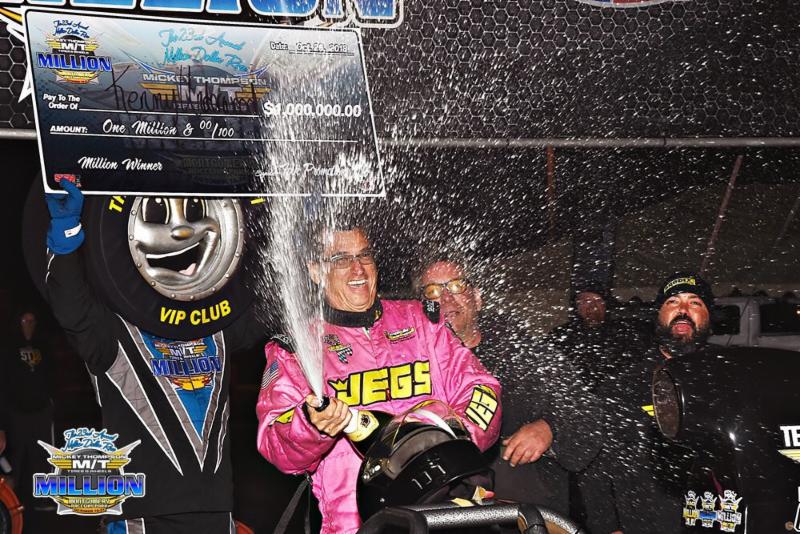 For the second time in his career, veteran E.T. bracket racer and longtime JEGS Mail Order associate Kenny Underwood has claimed a victory at the Mickey Thompson Million Dollar Drag Race. Driving his JEGS-backed dragster, Underwood made his way through a field of nearly 300 of the nation’s best sportsman drag racers to capture the massive $275,000 first-place prize.
“Sometimes I have to pinch myself because I can’t believe this is really happening,” said Underwood, who was also crowned the Million Dollar Race champion in 2013. “Obviously, I’m very, very happy. I want to thank Randy (Folk, Million Dollar Race promoter) for having this race and JEGS for all their support.” 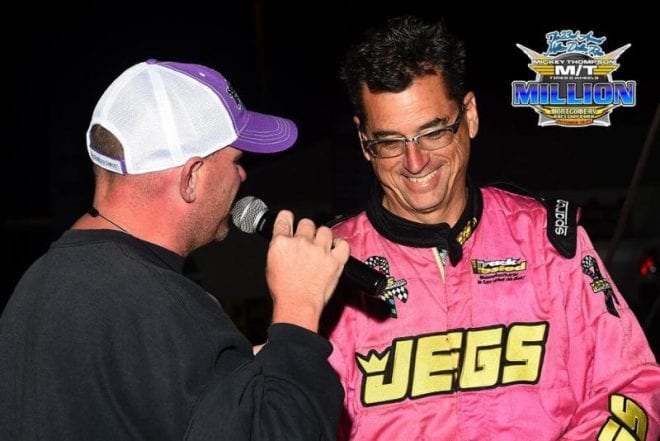 Racing late into the night, Underwood made his way through nine tough rounds of competition on the Montgomery Motorsports Park eighth-mile. In the final round, he staged against 17-year-old phenom Cory Gulitti of Spring, Texas, and won the with a 4.767 elapsed time, matching his dial-in prediction of 4.76-seconds. Gulitti broke out by running quicker than his 4.44 dial with a 4.435. Underwood’s path to the final also includes wins against successful E.T. racers David “Bird” Jones and Chuck Flanagan.
For Underwood, a second Million Dollar Race win is just the latest milestone in a lengthy career that includes countless high stakes E.T. bracket wins at tracks across the country. Underwood is a three-time overall champion at the prestigious Moroso 5-Day E.T. Championships in West Palm Beach, Fla., and last November, he earned a $50,000 victory at the Bracket Racing World Series in Darlington, S.C. He now joins fellow Florida native Gary Williams as the only two-time Million Dollar Race winners.
“To win this race once is special to do it twice is just hard to imagine,” Underwood said. “I can’t describe it. I just feel really fortunate to have all the support I have.”
Underwood’s second win was nearly overshadowed by the adventures of runner-up Gulitti who crashed his dragster following his round six win over Slate Cummings. Gulitt’s car rolled several times, but he was able to quickly climb from the wreckage unharmed. Rules for the Million Dollar race allow a driver to continue using a replacement car, so Gulitti was able to continue by driving a second dragster owned by his father, Chris. Shaken but undeterred, Gulitti advanced to the final with wins over Scotty Richardson and Randell Reid.
“I was a little nervous. I’m not going to lie,” Gulitti said of his decision to continue. “I felt good enough to keep going. Once I got back in car my nerves were calmed down. You’ve got to push through and act like nothing ever happened. That was the only way I could think to do it.
“By the time I got to the final, I don’t think anything was going to faze me. I don’t think I could have gotten any more nervous or scared than I was (after the crash) in the sixth round. I’m just very fortunate to be able to do this.”