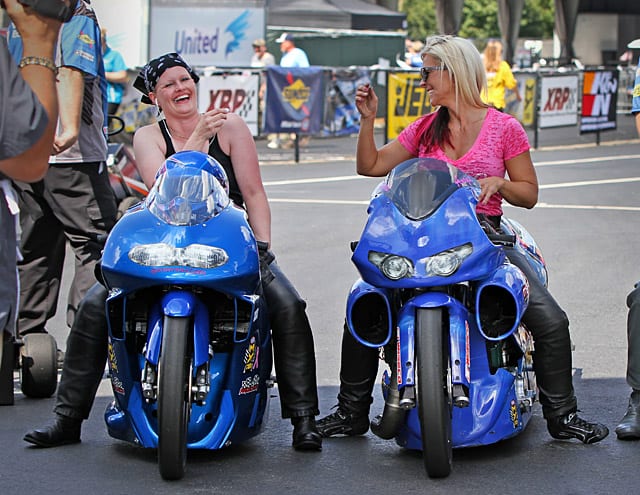 After 14 seasons as a sportsman motorcycle drag racer, Kelly Clontz made her first dip into NHRA Pro Stock Motorcycle racing last year, qualifying at her debut race in Englishtown and then again at Charlotte and Maple Grove. 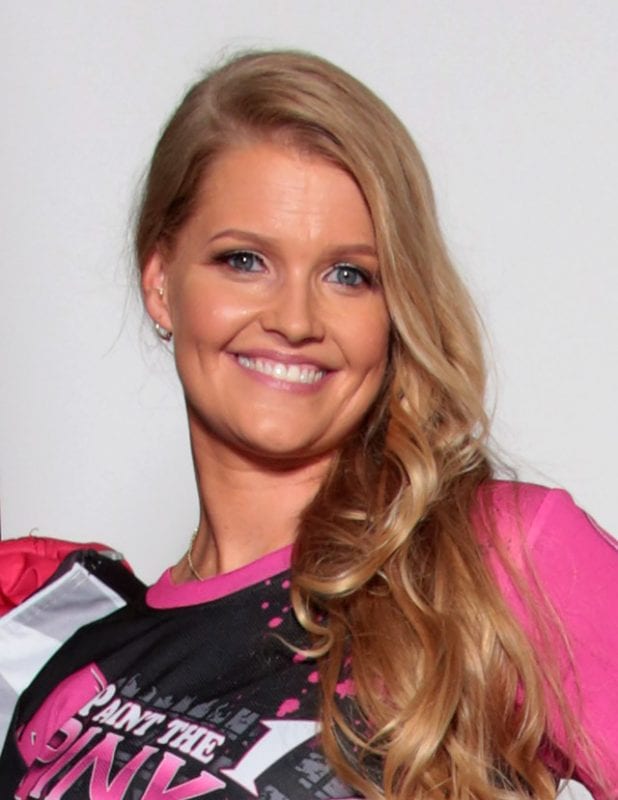 Clontz now plans to run the entire 2018 PSM season on the Mello Yello circuit, with big goals of qualifying at all 16 races, scoring round wins, claiming a spot in the Countdown to One, and earning the Road to the Future award—the National Hot Rod Association’s version of Rookie of the Year.

Along with her husband Chris, Kelly owns her own Suzuki TL and Vance & Hines motor but will be pitting with Joe Riccardi’s San Marino Excavating team, where Chris (also a sportsman racer) started wrenching for the 2017 season. Riccardi will make the tuning calls, Chris will tighten up the bike, and Kelly will throw the clutch.

Riccardi is also partnered with two-time NHRA champ Matt Smith this year, and Smith will be lending his broad tuning and riding experience to the San Marino team. “I’m really looking forward to getting some coaching from Matt and his wife, Angie,” said Kelly, who has already picked up some tips in February testing at Bradenton. “That will be a huge part of our program this year, having that veteran support and knowledge.”

“Kelly has come a long way since she got her license a little over a year ago,” noted Riccardi. “She has really improved since her first NHRA race at Englishtown to Bradenton testing last month. Now she’s got the support and the resources to be successful.”

“I think she will do well,” echoed Matt. “She wants to learn and she wants to be better, and that’s the attitude it takes.”

Attitude, confidence, and a strong work ethic are what have carried Kelly—a commercial electrical estimator by day—this far. Chris is a steamfitter with Local 602 out of Washington D.C., and the union is so excited by the Clontz’s plans and NHRA drag racing that they have jumped on board this year as an associate sponsor. 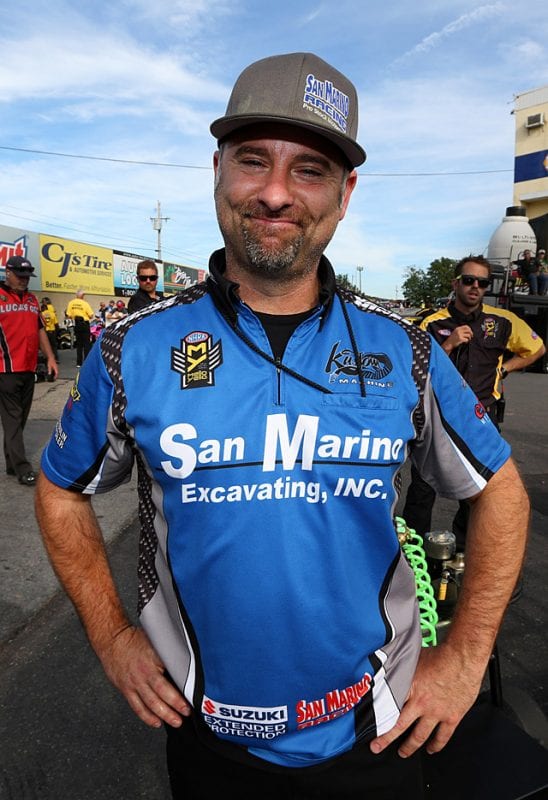 on and off the track,” emphasized Riccardi, hands-on owner of a demanding Detroit-area business. “When I went to Matt’s recently, we started off each day with a 7:30 breakfast meeting and worked until 1:30 in the morning on all the bikes—on Matt’s, Kelly’s, and Angie’s. We also have a ton of fun. We’re all about the same age, with Matt and I the oldest and Kelly the youngest.”

“Joe’s like an older brother,” said Chris. “He’s a special man, and for him to team up with us this year—we’re going to make this happen together.”

Kelly appreciates what Riccardi brings to their race program. “Joe is the puzzle piece that makes our Pro Stock Motorcycle team complete. I trust him and know that he wants success as bad as Chris and I do. He puts in 150%, which is what it takes to be successful. It’s hard to race with your husband and he brings the team balance”.

Emphasizing his role as team manager, Riccardi noted something else about the dynamic around the San Marino trailer. “Chris can’t tell her certain things that I can—he’s got to go home with her! They’ve been doing this a long time together, but every now and then he’ll tell me ‘Man, you’ve got to tell her that. She won’t listen to me!’”

Kelly and Chris, who met at the racetrack over 17 years ago, clearly enjoy racing and hanging out together. “Oh yeah, we’re around each other ALL the time,” laughed Kelly. “24-7 except when we’re at work”.

Kelly, Chris, and Angie all established their careers in the old MIRock Superbike Series—the hottest circuit of motorcycle drag racing ever along the mid-Atlantic coast.

Although MIRock races didn’t ever draw the same size of crowds and media as NHRA national events, anyone who was there could tell you they had their own level of intensity—with grudge crowds packing the starting line, money changing hands in the raucous grandstands, and racing frequently running up till two in the morning. “NHRA is just like racing Afterdark Underground,” laughed Kelly. “I can see how it could mess with people, but I love it.

“The ultimate goal for me last year was just getting comfortable on the bike, because it’s such a different ride. My riding style had to completely change. I now have a big tire bike, a clutch lever, I’m shifting by hand, and the power is so much more than what I’m used to. The Pro Stock cuts a full second off of my Top Sportsman elapsed time.

“So last year it was just getting laps, going A to B, and getting comfortable. Everybody thinks that riding a Pro Stock bike is just letting the clutch go and hitting the button. I’ve heard that so many times. There are so many things to stay on top of riding a Pro Stock Motorcycle—you have no idea. It’s not that simple.”

“You don’t wake up tomorrow saying ‘I’m going to race Pro Stock Motorcycle,’” said Chris. “To work as hard as she has, this opportunity is unbelievable.”

Chris has sidelined his own sportsman racing career to devote himself to Kelly’s NHRA effort. “As long as she’s doing this, I’m 150% all for her. To be at this level with her, I’m having the time of my life!

“In the beginning of her racing career, she’d say to me ‘Chris, I’m not sure I can do this.’ but she always has been able to and be successful at it. She really came to life riding a no-bar Hayabusa, and watching her get to this level and ride a six second motorcycle—it’s just ‘Wow!’”

Indeed, if Kelly has ever lacked in confidence, it’s never showed at the track. With multiple wins at the sportsman ranks, she also has a hilarious sense of humor to go along with her confidence and serious race attitude.

Last year’s Pro Stock passes were the first time Clontz had ever shifted gears competitively on a motorcycle, her sportsman bikes having relied on auto-shift. “That’s a learning curve,” laughed Kelly. “It happens quick. At first the sound of the motor was making me feel like it was revving too high, and I was short-shifting. It’s hard to trust that shift-light.”

Hitting Suzuki shift points will be a refresher course for Smith as well, who’s been racing low-revving Buells and Victories for a very long time. “Matt came back around after his first pass on my bike and said ‘The shift-light isn’t working,’” laughed Riccardi. “I said ‘It’s working, you’re just not waiting for it.’”

Matt will start the season on the Suzuki that Riccardi has campaigned previously before switching to a brand new Vance & Hines chassis assembled by Smith, Riccardi and V&H’s Mike Mullaney. “The new bike should be ready for Charlotte,” said Riccardi, who plans to have the old Trac Dynamics chassis Suzuki available once the new bike is sorted out.

Matt last rode a Suzuki Pro Stock Motorcycle for Don Schumacher Racing in 2009, and last tuned one in 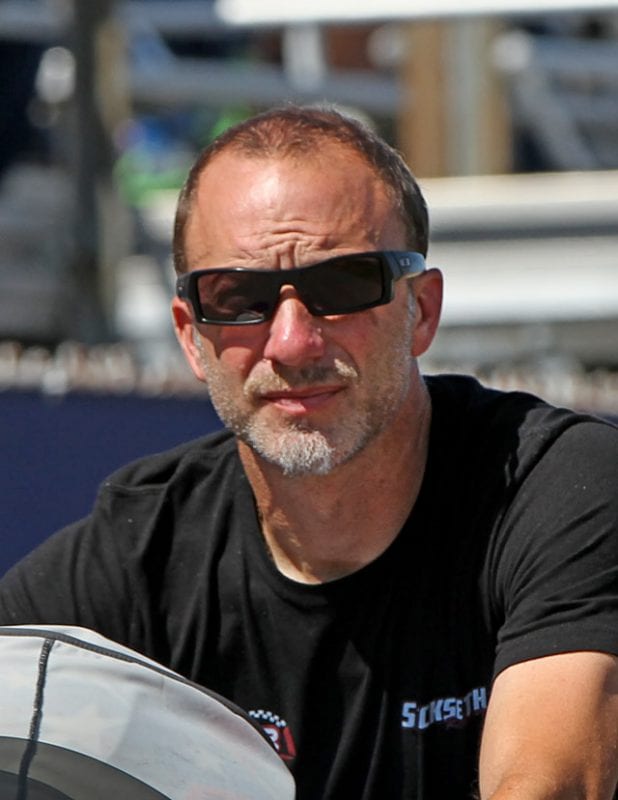 2005. “They’ve just got bigger motors now,” grinned Smith. “It’s a different feel, but like any Pro Stock bike, you have to be smooth to be fast. And we will be fast, it just might take us a few races to get there. Joe wants to win races, so that is our goal.”

Winning races, multiple bikes in the Countdown, and Rookie of the Year—it’s all within the grasp of the San Marino Excavating Racing Team. “I don’t want to get ahead of myself,” laughed Riccardi. “Without the great people at San Marino Excavating filling in for me when I’m gone racing—handling the day to day operations—and my wife Shelby taking care of the kids and all the things at home, the team would not be out here competing.”

And competing is the reason Kelly is at the track. Expect to see her wide grin and hear her mischievous laugh right up until the bikes roll into the lanes for the NHRA Gatornationals at Gainesville Raceway. Then when the bandana is on, so is her game face—a face that just might see itself rewarded as the Road to the Future winner.

Story and photos by Tim Hailey/EatMyInk.com.