With a dramatic flourish near the control tower of World Wide Technology Raceway at Gateway, Pro Mod star Keith Haney proudly peeled back his car cover on Saturday to reveal the “Black Mamba,” a brand-new 2019 Camaro built for him by Jerry Bickel Race Cars, not far away in Moscow Mills, Missouri.

An appreciative round of applause immediately broke out among the large crowd of fans, fellow racers and media members gathered for the unveiling at the historic St. Louis-area drag strip, as Haney beamed with pride and more than a little relief after keeping his new, all-purpose Pro Mod/Drag Radial entry top secret for several months.

“This is the very first car Jerry Bickel Race Cars started building in 2019, so it’s tag number one,” he pointed out. “Rickie Smith usually owns that number from Bickel every year, but unfortunately Rickie lost out this time and I got pro number one for 2019, which is a very special thing for me.

“And how about that name? The Black Mamba! I was having a heckuva’ time coming up with a name. I knew I wanted something that kids would like and would want to take pictures with and stuff like that, so I was thinking like spiders or snakes or super heroes.

“Then I was on a long drive with my girl, Misty Hayes, and she knew how important it was for me to pick the perfect name because I name all my cars, so she had been giving it a lot of thought,” Haney recalled. “She was throwing out names and we would toss them around a little. Then she suggested ‘Black Widow,’ but I said, ‘Wouldn’t that make it a girl car?’ So she thought about it a minute before suddenly looking over at me and saying, ‘What about Black Mamba?’

“Black Mamba? I’ll be honest, my first thought was, ‘Isn’t that Kobe Bryant?’ But then she looked it up on her phone and you know, the black mamba is one of the deadliest snakes in the world, so what better thing is there to say? You know my name–Black Mamba,” Haney declared, referencing the popular saying that longtime stood on his previous car’s doorsill. 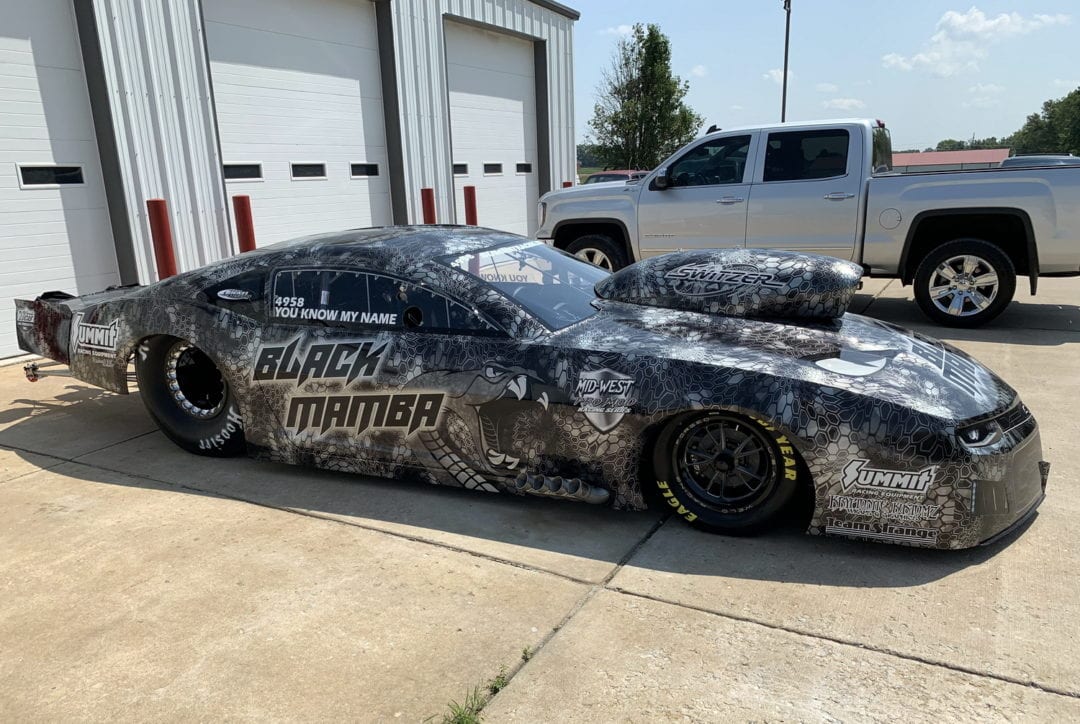 It made for great graphics, too, something that appealed to primary sponsor Summit Racing Equipment, which backed Haney for a three-race NHRA Pro Mod swing last year.

“The people at Summit, they loved what we did last year with a bold red-white-and-blue American motif,” Haney said. “But when I showed them what Chris Davis at Kryptonite Kustomz came up with this time, it blew them away.” Haney described the custom vinyl wrap as “shiny scales of black-and-silver snakeskin, and of course it’s got the Black Mamba on each side, mouth wide open, fangs out, eating up all the competition.”

“This is the most expensive, most experimental, and nicest race car I’ve ever ordered, fit to finish. And I have to thank Summit Racing Equipment again for being on board with us, because without them I just couldn’t do this; certainly not at this level,” Haney stated. “I feel so fortunate to have Summit on my car. I mean, think about it, Summit Racing has to be the biggest, most recognizable sponsor anywhere in Pro Mod today and I appreciate them having faith in me to carry their banner. It’s an honor.”

“I’ve always maintained most rules are based off the nitrous combination and I love nitrous and that’s not going to change, so I always knew it would be another nitrous car,” Haney said. “But beyond that, Brandon and I got together and I said, ‘Brandon, what would you do if you had the perfect chance to build the perfect car?’

“And what we ended up with is a car built exactly the way he wanted to a T. Brandon got to implement some ideas he’s had for a long time, some that Jerry himself wasn’t even sure would work, but now they’re going to show up in other builds he’s doing.”

Bickel confirmed he welcomed Switzer’s “innovative” ideas, adding, “we incorporated them all into this build and it turned out to be probably the lightest car we’ve ever built.”

Among the weight-saving measures is a special, extra-light carbon fiber for the body panels, with even the tubular “tree” that attaches the body to the chassis cast as part of a revolutionary one-piece front end. “You can pick up the whole front end with just one finger,” Haney marveled.

Additionally, instead of painting the car as Bickel typically prefers before any new ride leaves his shop, Haney persuaded him to allow Kryptonite Kustomz technicians to fly up from their base in Broken Arrow, OK, to apply the wrap over just primer and sealer before final assembly in order to achieve a cleaner, more detailed finish around the windows, doors and body seams.

“The entire wrap weighs only about seven-and-a-half pounds compared to more than 20 pounds for a couple of gallons of paint,” Haney pointed out.

He also confirmed the car is equipped with a lightweight, one-piece, all-enclosed MoTeC wiring system designed by Switzer, who also serves as the exclusive MoTeC distributor for nitrous racing applications.

“So I don’t have a grid, I don’t have a black box, I don’t have anything but this MoTeC M1 system with the latest-and-greatest digital dash, all lightweight magnesium to titanium,” Haney said. “We were looking for weight savings wherever we could find them because then it makes it easier to move weight around for Pro Mod or Radials vs. the World configurations. This car can even switch between a two-parachute system for Pro Mod and just one chute for radials racing.”

Significantly, Haney also makes the switch to Pat Musi Racing Engines with the new car. And again, Switzer provided his unique input on construction of the giant, Musi-built 959 cubic incher between the frame rails. Handling the horsepower is a special-ordered, lightweight billet Lencodrive outfitted with a Ty-Drive and Neal Chance torque converter. On the suspension, Adam Lambert at Precision Racing Suspension provides shock absorbers for the Pro Mod application, while shocks for RvW racing will come from Mark Menscer at Menscer Motorsports.

Haney also announced he is officially pairing up with fellow Mid-West Pro Mod Series competitor Jim Sackuvich, who will shortly take delivery of his own brand-new, Bickel-built ’69 Camaro that will share all the upgrades and innovations of the Black Mamba, including a new Pat Musi powerplant with Switzer calling the tune-up on both cars.

“This is a true two-car team with practically identical race cars barring the exception of body differences, so if you see Keith Haney at a race you’re going to see Jim Sackuvich, too,” Haney emphasized.

Despite the car’s reveal during the Summit Racing Equipment Mid-West Pro Mod Series event at Gateway, Haney said he remains unsure when Black Mamba will make its competition debut. From St. Louis it will head straight to Switzer Dynamics in Denver, NC, for final tuning tweaks before heading to a yet-to-be-determined track for initial testing.

“I’ve been watching all these guys like Tommy Franklin and Chad Green go fast with their Pat Musi/Jerry Bickel cars and you know what? It’s time for me to go; it’s time for me to show up and show out,” Haney stated.

“I mean we’re so excited about the Black Mamba and to show Summit Racing Equipment and everybody else in the Mid-West Series what we can do. And if I want to go over there and slap them around in PDRA I can go out and do that, too,” he continued. “If I want to go down to Florida and run the big race, I can do that. If I want to put a set of radial tires on it, now that I’ve got the lightweight Jerry Bickel car and Pat Musi power, I’m as fast as anyone–anyone–out there.

“I mean, I’ve got the best of the best and the baddest people tuning on it, so there are no excuses–period. Whether I’m running radial tires or big tires, no excuses. I have a race car now that should lead the pack anywhere we go and I’m really looking forward to it. The Black Mamba has arrived.”