Kalitta leads the Top Fuel category with an elapsed time track record run of 3.709-second pass at 327.43 mph in his Mac Tools dragster during his second session of the day. He is searching for his first No. 1 qualifier on the year, and 48th of his career.

“I was hopeful that we would run well and fortunately we had a good tune-up for the track tonight,” Kalitta said. “We’re hoping to turn things around at our home track in front of home fans and we always feel good about coming to Norwalk.”

Brittany Force landed second in Top Fuel qualifying with a 3.714 at 327.66 in her Monster Energy dragster. Current points leader Steve Torrence sits at third in preliminary qualifying, with a 3.715 at 328.46.

Hagan powered to the Funny Car qualifying lead with an elapsed time track record with a 3.865 at 333.33 in his MOPAR Express Lane Dodge Charger during the second qualifying session. He is aiming for his third No. 1 spot of the season to go along with three wins on the year. 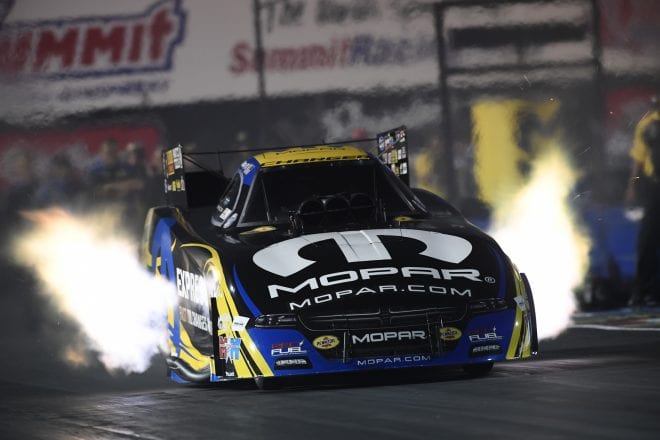 “We knew we didn’t have anything to lose with the second qualifying session and these conditions tonight made us feel like we could have a great run,” Hagan said. “It’s been a lot of fun to win some races this year and we’re definitely looking to get that points lead back again soon.”

Earlier in the second round, Robert Hight set the track speed record at 334.65 with a 3.870 in his Auto Club of Southern California Chevy Camaro to sit at second after the preliminary qualifying. Teammate John Force is third currently after a 3.911 at 319.98 in his PEAK Chevy Camaro.

In Pro Stock, Anderson holds the top spot after driving to a 6.808 at 208.62 in his Summit Racing Equipment Chevy Camaro during the second session. He is looking for his first No. 1 qualifier of the season and the 88th of his career. 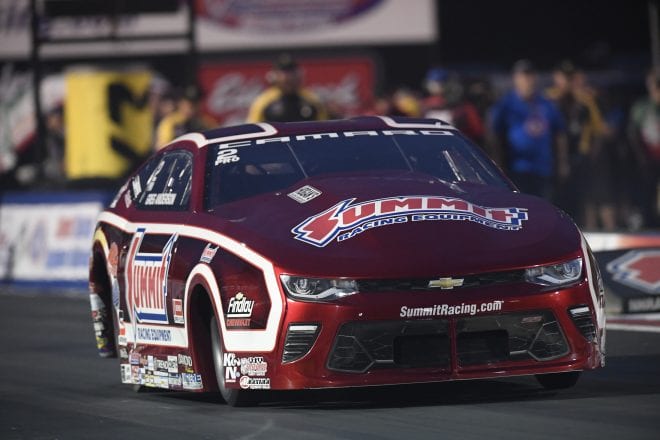 “To be able to get two runs in and run in the night-time conditions is an absolute blast in Norwalk,” Anderson said. “Fortunately we came out on top after day one, so hopefully we can keep that up the rest of the weekend.”

Points leader Bo Butner is currently second after a 6.617 at 208.55 in his Jim Butner’s Auto Chevy Camaro. Erica Enders is in third place after a 6.623 at 208.36 in her Elite Motorsports Chevy Camaro.

Smith finished atop the Pro Stock Motorcycle qualifying order with a 6.885 at 195.11 in his Victory Gunner during his second pass of the day. He is aiming for his 25th career No. 1 qualifier and his first of the season.

“We struggled a few weeks ago in Englishtown but we found a few problems and figured it would run better this week,” Smith said. “I think we can still go even faster tomorrow, and I think we have turned a corner now to help be more competitive for the rest of the year.”