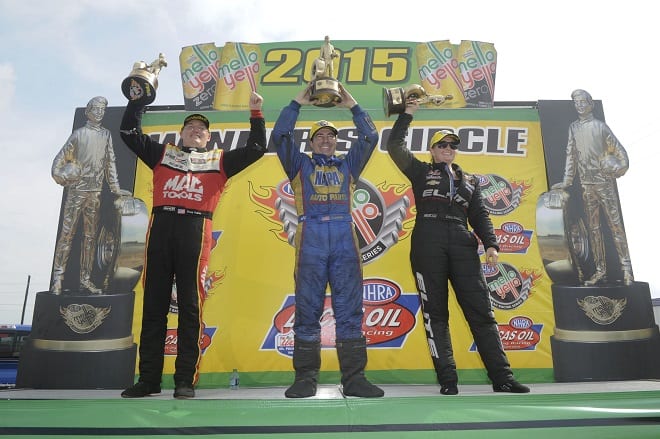 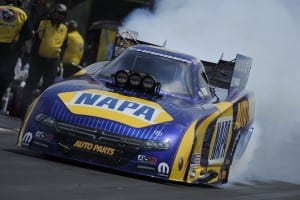 Capps powered past teammate Jack Beckman in the final round to earn his 44th career Funny Car victory and move into second behind John Force on NHRA’s all-time wins list in that category. Capps finished in 4.244 seconds at 258.32 mph in his NAPA Auto Parts Dodge Charger, while event top qualifier Beckman trailed with a 4.480 at 205.16 in his Infinite Hero Foundation Charger.

“It’s crazy to think that I am number two on that list,” Capps said. “I am not that good, so it just shows you from my time with (team owner) Don Prudhomme on down to my team at Don Schumacher Racing, all of the great people I have worked with over the years, it’s a credit to them.”

Capps defeated John Hale, Matt Hagan and Robert Hight in earlier rounds, posting a string of low 4.0-second runs on a hot and humid day in the Lone Star state.

“This is one of those races that when you can win it, you feel like you really earned it,” said an exhausted Capps of his third Houston win. “With the conditions that we had to drive in and tune in this weekend it feels great to get a win here.”

Capps moved into the series points lead with the victory, while Beckman moved up to sixth in the standings.

In Top Fuel, Kalitta outran longtime rival Tony Schumacher in the final round to earn his 36th career victory and his first win since last August in Seattle. Kalitta, who passed “Big Daddy” Don Garlits on the all-time Top Fuel wins list with the effort, drove his Mac Tools dragster to a winning time of 3.820 at 324.98 while Schumacher’s U.S. Army machine slowed near the finish line with a 4.014 at 225.60. 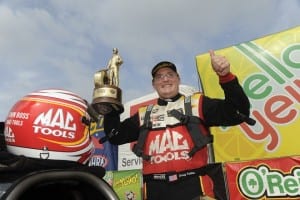 “I’ve had a couple dry spells,” said Kalitta, who beat Troy Buff, Larry Dixon and top qualifier Spencer Massey in the opening rounds. “It’s one of those deals where you never know when you’re going to win one of these, so you have to appreciate the opportunity and appreciate these wins when you get them. It’s a good feeling.”

It is the first time Kalitta has defeated eight-time world champ Schumacher in a final round since Brainerd in 2003, a stretch of 10 consecutive final rounds.

“We got by him, so it wasn’t until the end that we got him,” Kalitta said. “Tony’s a tough competitor, and here lately, we’ve had a tough time getting around him. Hopefully, this is a sign of things to come.”

With the win Katlitta moved to fifth in the series standings and Schumacher moved into the series points lead with the runner-up finish.

Defending Pro Stock world champ Enders-Stevens earned her second-straight victory at this event and the 14th of her career by outrunning fellow Texan Chris McGaha in the final round. She powered her Elite Motorsports Chevy Camaro to a winning performance of 6.571 at 211.73, while McGaha’s Harlow Sammons of Odessa Camaro trailed with a 6.598 at 211.66. With the win, her second of the season, Enders-Stevens moved into the series points lead for the first time this season.

Enders-Stevens said her Elite Motorsports team went above and beyond in order to get this victory. Just before the semifinal round her team had to change an engine in 11 minutes to make the semifinal. She beat Allen Johnson, Vincent Nobile and Jonathan Gray en route to the final. 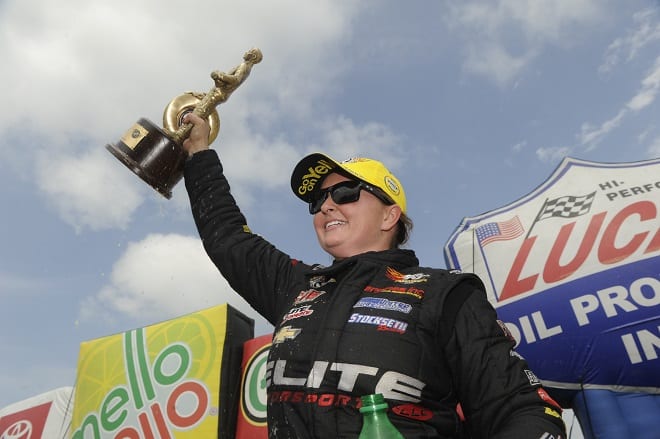 “It’s so hard to win,” Enders-Stevens said. “People have no idea how challenging it is to pull together and to be on top two weeks in a row is an incredible accomplishment. This was one of the more emotional wins for me given the adversity we faced and what we all overcame today.”