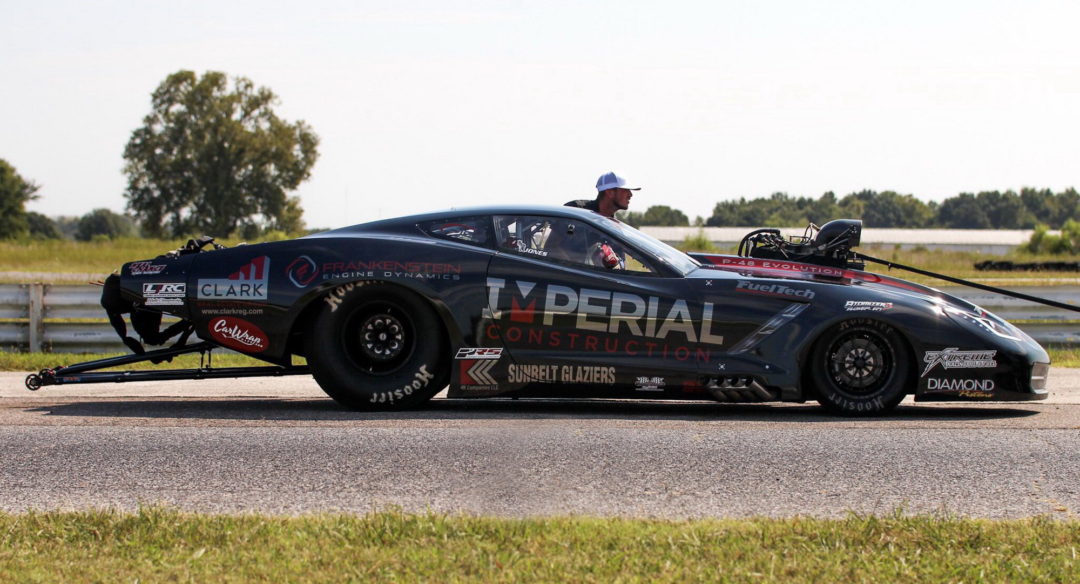 In a battle of screw-blown Corvettes in the Pro Mod final, Jones steered his Weatherford, TX-based C7 entry to a 3.86-seconds pass at 200.14 mph over a traction-challenged 4.11 at 194.07 by fellow Texan Frankie Taylor.

“Before we got out there my crew chief, Brandon Pesz, he told me to get ready to pedal about half track. He reminded me that Frankie’s good and has luck on his side at all times, so we didn’t want some freak thing to happen and he goes around us, so Brandon stepped it up a bit,” Jones recalled.

“And sure enough about half track it started shaking, but I slapped it one time and was able to get on down. But Frankie must’ve had to pedal at least once, too.”

Martin in a screw-blown ’68 Mustang Cobra, and Haney, who debuted his brand-new, nitrous-fed “Black Mamba” 2019 Camaro at the Memphis event, both fell in the opening round of racing and were relegated to the consolation rounds.

“I have to say E.J. Hickl did a good job taking me out. I mean, he had struggles and worked until four or five o’clock in the morning just to get his car put back together. And then, not only did he cut a light on me, he outran me by five thousandths, 3.78 with a three to my .78 with an eight,” Martin said after beating Michael Bradley in the first round of Slammers action.

“Then I had a single in round two before taking on Keith and that’s when my Cobra killed the Black Mamba,” he pointed out, laughing. “But what’s really important is that I’m trying to catch Jim Sackuvich for fourth in points and the Slammers pays points, too, so getting that win really helped.”

Several MWPMS racers commented on track conditions with traction at a premium throughout the weekend. Still, after 19 entries made qualifying attempts, Oklahoma’s Wells put his supercharged ’67 Shelby Mustang atop the 16-car field with a 3.73-seconds pass at 205.60 mph. Just eight-thousandths behind with another 3.73 was Taylor, with Martin third at 3.75, Jones fourth at 3.76 and Judd Coffman out of Ashmore, IL, with a 3.78 in his clutch-equipped, twin-turboed ’68 Shelby rounding out the top five.

Unfortunately, qualifying also was marred in the fourth and final session by a serious accident involving Kevin Maddux of Nixa, MO, and Alabama’s Jason Collins. About a hundred feet out, Maddux’s blown ’63 Corvette lost traction in the left lane and made a sudden right turn that tossed it sideways on its two left wheels while crossing the centerline and clipping the left front corner of Collins’ supercharged ’68 Camaro.

Collins minimized the danger with a remarkable job of keeping his car under control as Maddux’s car righted itself just before striking the right guardwall near the eighth-mile line. It then crossed the track and sideswiped the left wall before crossing over one last time and slamming the right wall again well into the shutdown area. Remarkably, both drivers avoided serious injury, with Collins still able to make round one of eliminations, though Maddux was sidelined by major damage for the remainder of the season.

Meanwhile, Jones opened with a strong 3.79 to beat Ron Muenks in the opening round, followed by a close two-hundredths of a second win over Coffman in round two after Coffman improved his career-best numbers to 3.76 at 209.39, which also represented top speed of the meet.

“That’s pretty special for us,” he said. “We’re just a small team running on a pretty tight budget, but I’ve been doing my homework trying to get some things straightened out and I think the car’s got a good, solid five or six numbers left in it under the right conditions.”

In the semis, Jones improved to his best run of the weekend with a 3.74 pass against Wells, who lost traction early and slowed to a 5.71-seconds effort.

“I’m a pretty cool, calm and collected guy when it comes to racing. I don’t get flustered a lot, but coming into that round I had the pressure on me and I could feel it. It was either win that round and keep the points chase alive, or lose and the championship goes to him right there,” Jones said. “So I was going to make sure that, you know, my part was taken care of.

“So FuelTech has a practice tree in their software so you can practice your consistency with your lights off the starting line and while I was sitting in the staging lanes I was sitting back there and probably let go of that button 30 times, just trying to keep myself quick and consistent.”

That left only the final, where the practice continued to pay off as Jones left with a sizable .080 starting-line advantage over Taylor. His win reversed the result from the first MWPMS race of the year when Taylor beat Jones in the final at the Texas Motorplex.

“We were able to keep lane choice going through elimination rounds, so I was able to put Frankie over there in the left lane and I think that helped,” Jones said. “Especially with the blower car it’s hard to see around the hat so you’ve got to line up pretty far to the left of the track just to see the tree. So you push him out there off the groove a little bit left and it’s hard to get off the starting line. That’s what our whole plan was going into it and it worked out for us this time.”

Heading toward Oct. 11-12, at Osage Casino Tulsa Raceway Park for the last of eight scheduled events on the MWPMS 2019 schedule, Wells holds a 69-point advantage over Jones. With 20 points available per round win, plus points earned in qualifying, Jones knows a considerable challenge remains, but insists his Imperial Construction team will arrive prepared.

“I want this championship as much as anybody, if not more than anybody,” he stressed. “But I do know it’s not going to be easy.”

Following the official-season-ending Tulsa event, the Summit Racing Equipment Mid-West Pro Mod Series will continue on to the Texas Motorplex, south of Dallas, for a special, 16-car, invitation-only MWPMS race Oct. 18-20, in conjunction with the NHRA AAA FallNationals.