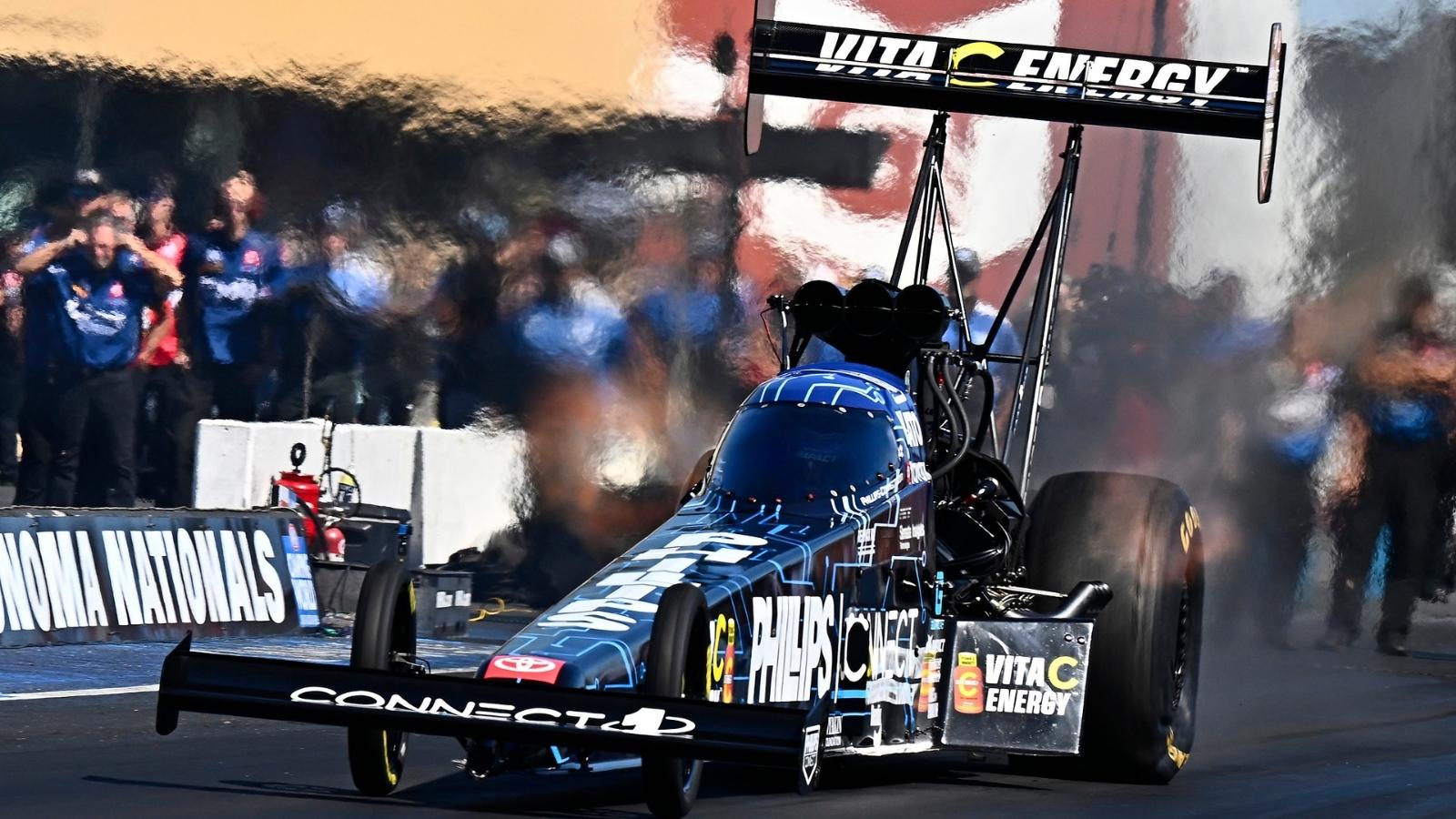 As the Western Swing has unfolded from Colorado to California Justin Ashley and the Phillips Connect Toyota Top Fuel dragster powered by Vita C Energy raced to the quarterfinals today at the Sonoma Nationals. In back-to-back weekends Ashley recorded a semifinal and quarterfinal finish with one race remaining the three-race stretch. Ashley entered race day as the No. 6 qualifier following a strong final lap on Saturday afternoon that propelled him into the top half of the field.

The Phillips Connect Toyota dragster powered by Vita C Energy was facing one of the other young stars of NHRA in Alex Laughlin who races Top Fuel at select events each season. Ashley’s best qualifying run of the weekend in the final session gave him lane choice and confidence going into the first round. He took a starting line advantage and never looked back getting to the finish line for the win with a 3.752 second run at 323.58 mph in front of Laughlin’s 3.803 pass. It was a critical win as every driver in the top seven won their first round match-ups. Ashley was able to hold onto his lead over the four drivers behind him and keep pace with the two drivers he is trying to chase down.

Racing against Mike Salinas in the quarterfinals Ashley was able to get off the starting line first with the Phillips Connect Toyota dragster lifting the front wheels as the rear Goodyear slicks hooked up. Accelerating to over 100 mph in less than a second Ashley immediately had his hands full as his dragster moved towards the centerline and he was furiously working to keep his dragster in the middle of the groove. Salinas was on a clean pass and as Ashley’s dragster made a dramatic move towards the wall he made the decision to lift to regain control.

“The car took off and carried the front end like it usually does,” said Ashley, who has two wins so far this season. “That right lane tends to pull you to the left. When the car settled down it was already moving to the center line. When I went to make the correction, it bounced up again. I was trying to move it over to the right and nothing was happening then you have nowhere to go. It just started spinning the tires and shot over to the right and you are better off to call it a day.”

The dramatic move by his 11,000 horsepower Phillips Connect dragster was a new experience for the 2020 NHRA Rookie of the Year. Throughout his young career Ashley has added passes and experiences to his resume. The quarterfinal run was another chance for Ashley to improve.

“It caught my attention for sure,” said Ashley. “You are trying to hang with it as long as you can. I was in the car thinking I am moving it over to the right and it has to start moving pretty soon. It wasn’t going anywhere because the front end was still up. I heard him beside me and it whipped over the right.”

The Sonoma Nationals had three days of nearly sellout crowds and Ashley spent considerable time with the fans. The opportunity to talk about his marketing partners like Bendix, Velociti, Sensata Insights, Lucas Oil, and KATO Fastening Systems was a great experience. The team will head to Seattle sitting in third place in the Camping World Drag Racing Series Top Fuel point standings.