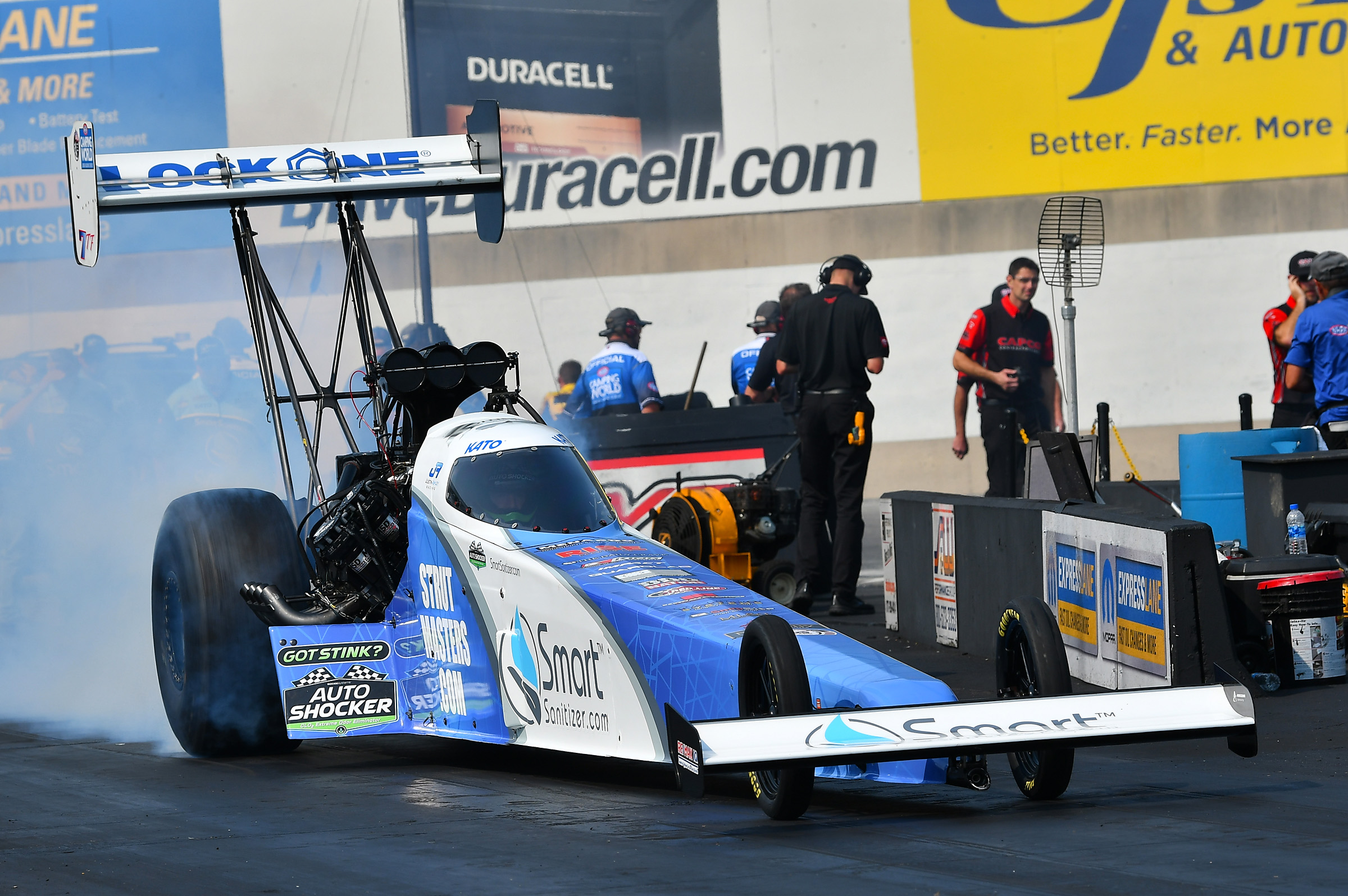 Racing in his first official Countdown playoff race Justin Ashley, of Plainview, New York, drove the Smart Sanitizer Top Fuel dragster powered by Strutmasters.com to a runner-up finish at the Mopar Express Lane NHRA Nationals at Maple Grove Raceway. Ashley made significant strides throughout qualifying to enter race day as the No. 6 qualifier and a first round match-up with perennial championship contender Doug Kalitta. In a solid performance Ashley took out Kalitta, Clay Millican and Steve Torrence before dropping a close final round to Billy Torrence.

“It was really a great weekend. The car was fantastic running in the low 3.70s or high 3.60s,” said Ashley. “It was consistent and that is a testament to (team owner) Dustin Davis and (crew chief) Mike Green. We have worked for this all year. We spent the races prior to the Countdown getting ready for this moment. When it was time to step up, we took advantage. I feel good leaving here this weekend after taking a big swing out of the points. Now we focus on Charlotte.”

The opening round race was a battle between two of the best drivers off the starting line in recent NHRA history. When the Christmas Tree fired both drivers were at the top of their game leaving together and keeping their 11,000 horsepower racecars in the middle of their lanes. At the finish line it was Ashley getting the win over Kalitta with a strong 3.703 second, 328.26 mph run.

The quarterfinals pitted Ashley and his Top Fuel dragster which in addition to Smart Sanitizer and Strutmasters.com also gets strong financial support from Auto Shocker and KATO Fastening Systems against veteran driver Millican. Racing against the No. 3 qualifier had Ashley’s Davis Motorsports team digging deep against another Countdown opponent. In an eye-opening performance crew chief Mike Green tuned Ashley racecar to a best of the round, 3.697 second run against Millican’s 3.819 second pass. The run gave Ashley lane choice over the points leader and No. 2 qualifier Steve Torrence in the semifinals.

The 2020 Rookie of the Year was looking for his first career round win against the three-time Top Fuel world champion. Conditions continued to stay warm but that did not deter Ashley and his Smart Sanitizer Strutmasters.com Top Fuel team. Knowing he needed to give his team every advantage Ashley cut his best light of the day a strong .034 reaction time, but his dragster smoked the tires just as it was beginning to drive away from Torrence. Like a seasoned veteran Ashley let his racecar settle down and then re-engaged the throttle to begin accelerating again. Less than a second later Torrence also lost traction and the second-year pro was able to shoot around Torrence for the win and a trip to his third career final round.

“That was a very interesting run. It took off and suddenly, I felt it start to haze the tires,” said Ashley, who lost a close pedal fest in the semifinals of the 2020 U.S. Nationals. “I slowly got myself back in it. I looked to my left and I saw Steve out ahead of me and I thought to myself maybe I should let off because I didn’t want to damage my car. He started to haze the tires and I was able to drive right by him. The more experience you have the better when it comes to pedaling a race car like this. Steve is tough to beat. I think it was seven times before we beat him. You take wins any way that they can come.”

After defeating Torrence the son, Ashley faced Torrence the father, Billy, in their first meeting of 2021 and third overall. Last year at the U.S. Nationals Ashley ousted Torrence in the first round. Once again Ashley lived up to his reputation as one of the quickest drivers off the starting line and his dragster was flying down the right lane before it overpowered the track and gave Torrence the opportunity to just get around him at the finish line stripe. Before he launched, he experienced an unusual moment as his dragster rolled away from the starting line as he was attempting to stage.

“I don’t know what happened when I was staging in the final,” said Ashley. “Normally I roll up to the beams and I will stop and wait to stage. After I rolled up, I knew I was in forward all of a sudden, I let off the brake and give it some clutch and it is going backwards. The only thing I can think of is maybe I hit it with my knee, but I don’t know. It was a weird feeling, but I was able to get it back into forward no problem.”

“To be honest with you I didn’t know who won at first. I heard him and as I crossed the finish line, I didn’t see my win light. I figured it was probably a good race. It is one of those good races where you tip your hat to the opponent and move on to the next one,” added Ashley.

The second-year pro made a serious move in the 2021 NHRA Countdown to the championship points moving from No. 7 to No. 4 and a 55-point, less than three rounds, deficit from the No. 1 driver. Six races now stand between Ashley and his first Top Fuel world championship.