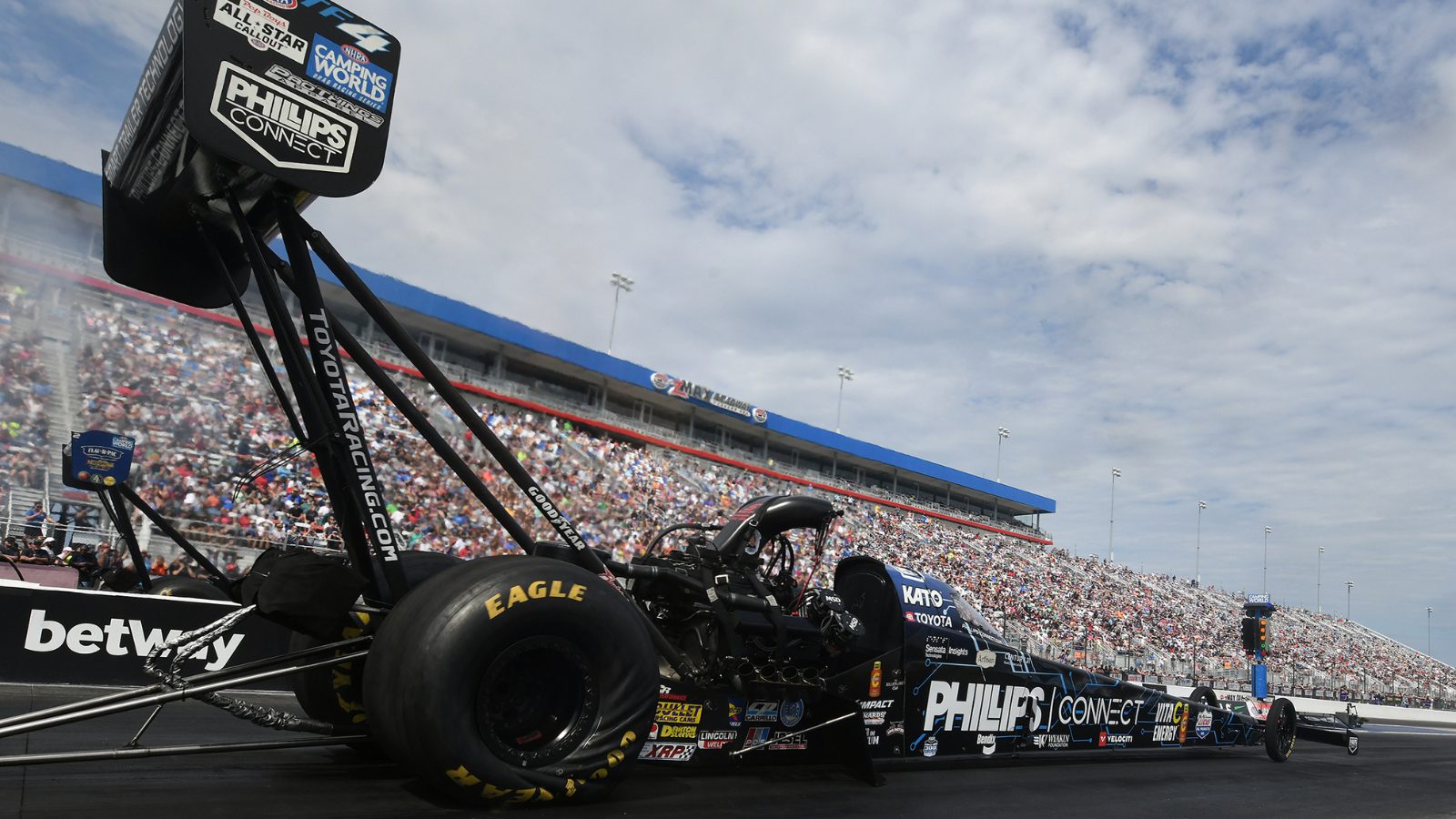 Top Fuel points leader Justin Ashley made a career-best run to close out qualifying at the 14th annual Betway NHRA Carolina Nationals, picking up the No. 1 qualifier on Saturday and clinching his second straight top spot at zMAX Dragway this season.

John Force (Funny Car) and Erica Enders (Pro Stock) also qualified No. 1 at the second of six races in the Countdown to the Championship during the 2022 NHRA Camping World Drag Racing Series season.

Ashley rolled to the top with an impressive run of 3.668-seconds at 335.65 mph in his 11,000-horsepower Phillips Connect dragster, picking up his second career No. 1 qualifier. Ashley and Brittany Force also put on a show during their thrilling side-by-side pairing, making the two fastest runs in track history. Force’s 336.91 set the track record, while Ashley nearly matched it as he went to the top. The young standout advanced to the final round to open the Countdown to the Championship to move into the points lead and he’ll open raceday on Sunday against Alex Laughlin, looking for his third victory this season.

“There’s something about zMAX Dragway and something about this team, too,” Ashley said. “We’re just along for the ride when it’s running like that, and it’s such a blast. Our team has been working so hard. We’ve got a big job to do tomorrow, and we want to be out here for a long time. The competition is tough, but we’ve got to continue to put our best foot forward. We’ve got a long way to go. It’s really important to be consistent and put yourself in the best position to win on Sunday, but the way the Top Fuel field is, it’s going to be a difficult first round.”

Force finished in the second position with her run of 3.685 as she tries to jump back in the Top Fuel points lead. Clay Millican took the third spot with a 3.687 at 331.20, while Mike Salinas, Doug Kalitta and Josh Hart all went in the 3.60s as well to take the next three positions.

In Funny Car, John Force held onto the No. 1 position with his run of 3.854 at 330.47 from Friday in his 11,000-horsepower PEAK Chevrolet Camaro SS. That gives the 16-time world champion his second straight top qualifier at the Bellagio of dragstrips and also his second this season. It’s the 165th top qualifier for the Funny Car icon, who is after a big day on Sunday as he looks to make a big jump in the points standings. He’ll open eliminations fourth in points but is only a round out of second with teammate Robert Hight currently leading the way.

“My guys are doing a really good job and we’re learning every week,” said Force, who is looking for his second straight win in Charlotte. “We’ll see what happens tomorrow. The cards are leaning my way, but the guys in this class are really good and we’ve got our work cut out for us. I’m excited to be No. 1 and I love being in the game with these guys. I’m just having fun and I’m enjoying racing.”

Matt Hagan’s Friday run of 3.861 at 329.99 kept him in the top spot and three other drivers – Hight, defending world champ Ron Capps and Bob Tasca III – also went 3.86 to round out the top five. J.R. Todd climbed to sixth during the final session with his 3.873.

Enders was simply dominant to close out qualifying, improving on Friday’s run with a stout 6.510 at 212.46 in her Melling Performance/Elite Motorsports Chevrolet Camaro. The Pro Stock points leader made the quickest run during every qualifying session in Charlotte, continuing her recent string of incredible performances to open the Countdown to the Championship. She’s now made the quickest run in the last nine sessions, dating back to the second round of qualifying last weekend at Maple Grove Raceway.

That includes all four rounds of eliminations in the playoff opener en route to her seventh win this season, and Enders, a four-time will look to keep the hot streak going on Sunday at zMAX Dragway when she opens eliminations against Larry Morgan.

“I think this just shows we’re capable of,” Enders said. “To come in here and accumulate nine points in qualifying, we’re just going to keep chipping away it and hopefully we can extend our lead. But we’ve got a target on our back, so we’ve got to go to work. I don’t want to leave everything laying on the table and every round is important tomorrow. Hopefully we start out on the right foot and just battle it out all day long.”

Troy Coughlin Jr., who has been to the final round at three of the past four races, winning twice, had a big day as well, qualifying second with a run of 6.522 at 211.10. Defending world champion Greg Anderson improved on Saturday but got bumped to third with his 6.528 at 210.21.

In the FuelTech NHRA Pro Mod Drag Racing Series presented by D-Wagon, defending world champion Jose Gonzalez qualified No. 1 with a run of 5.678 at 252.95. The race this weekend is powered by Pee Dee Fleet and Gonzalez will aim for his first win of the 2022 season.

Eliminations for the Betway NHRA Carolina Nationals begin at 12 p.m. on Sunday at zMAX Dragway.