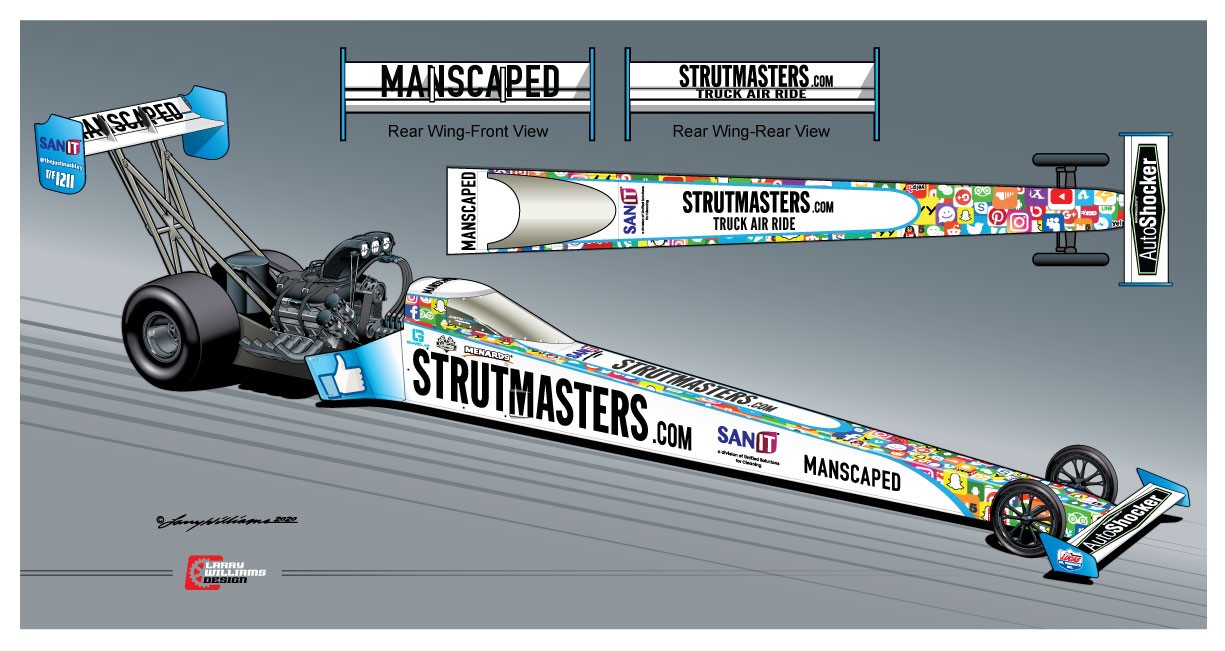 National Hot Rod Association (NHRA) Rookie of the Year contender Justin Ashley announced today that MANSCAPED™will be added to his 11,000 horsepower Top Fuel dragster as a major associate sponsor. The marketing partnership will cover the remainder of the 2020 NHRA Mello Yello Drag Racing Series season beginning this weekend at the most prestigious drag race of the season, the NHRA U.S. Nationals in Indianapolis, September 4-6.

MANSCAPED has activated in other forms of motorsports but this will be their first involvement in NHRA competition. Ashley will add MANSCAPED to his Strutmasters.com Top Fuel dragster to three prominent locations, the front of the rear wing, the capsule roof and the front side panels which will receive excellent coverage during the FOX broadcasts.

Ashley is currently one of the youngest drivers competing in NHRA’s premier Top Fuel Dragster category. In 2017, Ashley was named to the Drag Illustrated magazine 30 under 30 list, highlighting some of racing’s most promising young individuals on and off the racetrack. A second-generation driver Ashley will be competing in his first final round versus TJ Zizzo in conjunction with the U.S. Nationals. Due to inclement weather in July the final round of the NHRA SummerNationals was postponed to this weekend and will be contested at the end of Saturday’s qualifying session.

“Teaming up with MANSCAPED is a perfect fit for my team. Their products are about precision engineering, power and design just like my race car,” said Ashley, a two-time national event winner in the Top Alcohol Dragster class. “Comfort is also something I am always thinking about especially when I am going over 320 mph.”

MANSCAPED is the leader in men’s below-the-waist grooming with an underlying commitment to empowering men to feel clean, confident and ultimately, to be the best versions of themselves. “At MANSCAPED, we carefully pursue partnerships that align with our mission to get the right tools for the job into the hands of men everywhere,” said Joey Kovac, Senior Director of Marketing at MANSCAPED. “We’re excited to get in front of the NHRA crowd, while providing Justin and his team with a fresh trim and boost of confidence prior to the competition.”

The NHRA U.S. Nationals is recognized as the biggest and most prestigious drag racing event in the country on par with the Daytona 500 and Indianapolis 500 when it comes to career defining victories. Qualifying will be held Friday and Saturday with final eliminations beginning Sunday, September 6 at 10 a.m. ET.