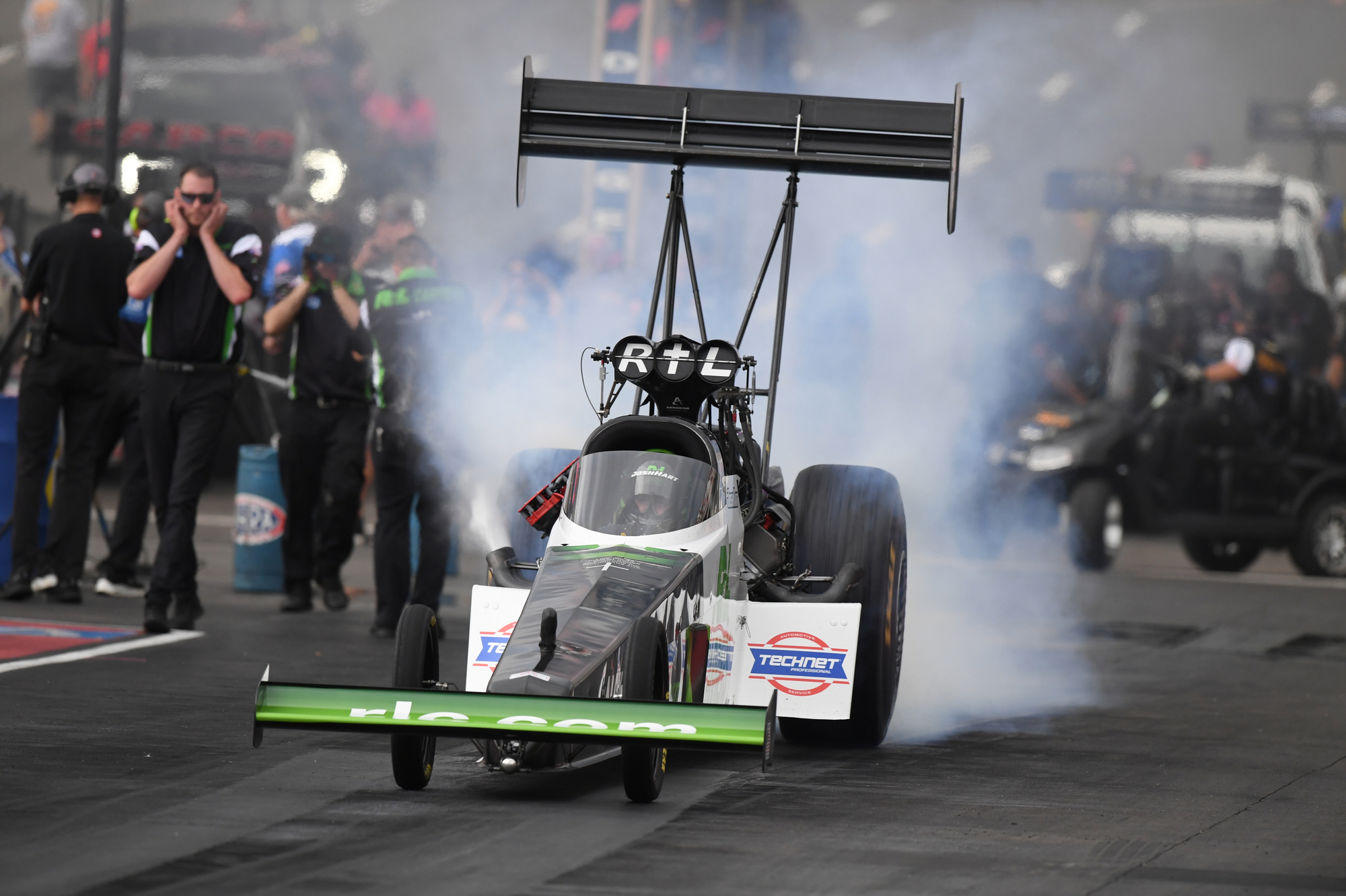 Josh Hart and the R+L Carriers Top Fuel team continued their hot streak to begin the historic Western Swing. The second-year driver made his first passes at Bandimere Speedway on Friday and raced to the semifinals from the No. 9 spot today. Tough competition faced Hart all day as he defeated Doug Kalitta and Brittany Force before dropping a close drag race to Shawn Langdon.

“I am just excited to be racing in the Western Swing,” said Hart, who raced to the final round three weeks ago in Norwalk, Ohio. “We want to take it one round at a time. We want to progressively get our R+L Carriers dragster back to where we think it needs to be. I am having a lot of fun and this team is moving in the right direction.”

The first round race versus perennial championship contender Kalitta was a classic drag race. Hart was first off the starting line but Kalitta pulled around the R+L Carriers Top Fuel dragster at half-track. Hart was tracking him down and Kalitta’s Goodyear tires began to haze at about 600 feet as Hart kept charging. At the finish line Hart got to the stripe first for the win with a 3.999 second pass in front of Kalitta’s 4.003 giving him a victory by seven thousandths of a second at over 310 miles per hour.

“Everything was different this race. Everything from the injector to the pistons and even the driver was different. I had to be tuned up because of the altitude,” said Hart. “We are learning and learning at every race with every run. What a beautiful facility and the fans were packed in here.”

Hart was ready for his second round race with No. 1 qualifier Force jumping off the starting line with a .036 reaction time. Force was able to get a nose on Hart but his R+L Carriers Top Fuel dragster kept accelerating and was closing the gap rapidly. As Hart was pulling up on Force’s dragster at over 300 mph she began to fall back with motor issues plaguing her dragster. The win advanced Hart to his second consecutive semifinal round and matched him up with Langdon.

“The guys always give me a good race car,” said Hart, who has two Top Fuel wins in his young career. “We have grown together this year. Last year was a storybook fairy tale season. We had to be patient with each other at the beginning of the season. Now they are doing a great job and I need to work a little. We are a team. We win together and work together.”

In the semifinals two of the most recent finalists pulled up beside each other. It was a battle between No. 9 qualifier Hart and No. 12 qualifier Langdon, two drivers recognized as the best off the starting line. The drivers jumped off the starting line and they were right beside one another all the way down the track. At the finish line it was Langdon getting the nose of his racecar out in front of Hart’s R+L Carriers dragster. The scoreboards lit up 3.900 seconds to 3.935 seconds in one of the closest races of the day.

Making his debut run at the three race Western Swing is a major commitment for the team owner and driver from Ocala, Florida. Over three weeks Hart and his team will visit three brand new facilities and engage with new fans all over the western portion of the country

“I have never been to Sonoma and I have never been to Seattle. I am looking forward to the challenge. I talk with our car boss Dave Gaterell or (crew chief) Ron Douglas. We will walk the track Friday Morning to try and spot the groove and make sure I know where the turn off is. I just want to make sure I have a handle on all the basic simple stuff. Until you make that first pass it is all the same. You try to get over the butterflies and keep it all under control,” said Hart. “The fans have been off the charts receptive to me and our program. This weekend was very good for R+L Carriers and they are offering a great opportunity for us to grow this program together.”

The R+L Carriers team will be back in action this Friday at the Sonoma Nationals from Sonoma Raceway.