When Rick Jones teamed up with Elite Motorsports a few years ago he probably never dreamed of the day he’d be sitting on the other side of an astronomical year with multiple race wins, records set and an NHRA Pro Stock championship to the team’s credit. 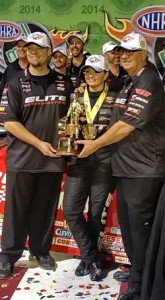 As co-crew chief for the Elite Motorsports Camaro driven by Erica Enders-Stevens, Jones’ cup was overflowing in 2014. His RJ Race Cars and Quarter-Max businesses continued to thrive, Quarter-Max increased involvement to support the budding Professional Drag Racers Association (PDRA) throughout the season, and Jones and his team served customers across many genres of drag racing, all while helping Enders-Stevens become the first woman to win a Pro Stock championship.

While each of these endeavors keeps Jones always on the go, he is quick to recognize each is beneficial to the other and has no plans to shy away from any opportunities in 2015. He and son Rickie will retain tuning duties for Elite Motorsports in 2015 as they continue to expand Quarter-Max and are increasing involvement with the PDRA once again.

“When we can’t go to the PDRA I always follow the Motor Mania TV coverage,” Jones said. “When Brian Olson started doing the top end interviews at Rockingham I was impressed. I thought it would be cool to connect Quarter-Max with that part of the live feed coverage. The interviews add a lot to PDRA and really highlight the drivers themselves and not just the cars.

“We want to be a sponsor in the PDRA because it’s a two-way street. They help us and we want to turn around and help them as well. It’s mutually beneficial. I truly believe in the PDRA and think it’s a great place to race. We need that. Everybody racing there obviously needs it. So we’re trying to do our best to support it.” 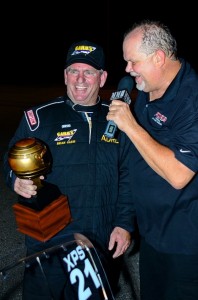 For the final event of the inaugural PDRA season, Quarter-Max sponsored the ‘Top End Zone’ Live Feed interviews, just in time to catch driver reactions to championship wins and losses. The interviews were such a hit among viewers that for 2015, Quarter-Max will also sponsor a ‘Starting Line Zone,’ bringing candid driver interviews to both ends of the eighth-mile.

On top of their sponsorship role, Rick and Rickie Jones have a strong commitment to supporting customers in the PDRA. Top-notch competitors like Pat Stoken, John Montecalvo and Billy Albert have driven RJ Race Cars for years and are a testament to the caliber of chassis produced by the Jones family and their team. Jones has been involved in every aspect of racing at one time or another and believes that staying involved with the fierce competition of Pro Stock pushes him to build a better product for his customers.

“When you completely understand how to race a car I think it no doubt makes you a better car builder because you understand, thoroughly, the car inside and out,” Jones said of balancing his crew chief responsibilities with his businesses. “It’s something I think we get better at all the time. It helps our parts business, too, as far as building better parts for our customers. It’s a win-win.

“We’re continually developing new products so our customers can have better products all the time. Our goal is to offer the racers a great product at a very fair price with a good delivery. I just want to take this time to thank everybody for their support in 2014. It enables us to run this business and sell cars and parts worldwide. We’re very fortunate.”