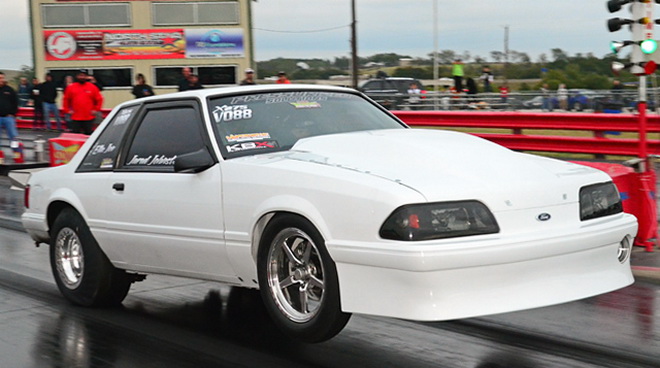 A full field of 32 X275 cars filled the pits alongside 20 entries for the Limited 275 class presented by Donihoo’s Speed Shop in Ft. Worth, TX. With the Royal Glass X275 second-chance race, along with 5.80 and 6.60 index classes, it made for an action-packed weekend of side-by-side drag racing. 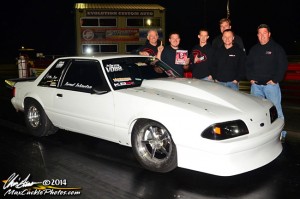 The schedule called for three rounds of X275 qualifying to be completed Friday night under the lights but after a session and a half, high winds and heavy rain pummeled the facility to end the action early. Before the rain set in, though, Kit Luong had wheeled his 1989 Ford Mustang to the temporary top spot with a 4.65 at 159 mph followed closely by Shane Fisher, Chris Shortridge, Odie Sturgeon and local racer Eric Moore to round out the top five.

Upon the completion of four X275 qualifying rounds, Raymore, MO’s Jared Johnston led the field with a stellar 4.54 at 162 mph, followed by three racers who also posted 4.57s including Todd Moyer, Luong and Taylor Lastor, respectively. Fisher nailed down the number-five spot with a 4.58-seconds pass and the top eight was completed by Moore and Justin Curry, who also ran 4.58s, with Tyler Stubbe at 4.60 and 158 mph. Chase Driskell’s 4.67 at 157 mph rounded out what was the quickest top 16 cars in X275 history, while Auden Gamino of Odessa, TX, ran 5.61 at 141 mph to close out the 32-car qualified field. 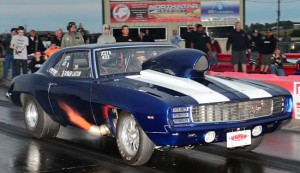 Johnston kicked off the first round of eliminations on a competition single with a world-record-breaking tune up under the hood of his 1992 Ford Mustang that launched him into a power wheelstand he couldn’t let ride and was forced to lift. The remainder of the first round bore witness to monstrous passes including a 4.55 at 159 by Moyer, Luong matching the 4.55 at 160 mph, Fisher going 4.57 and 161 mph, a 4.59 at 157 by Stubbe and Lastor posting a 4.60 at 159 mph.

With eight powerhouse teams left in competition, the call went out to fire up the first pair of round three. Stubbe came out alongside Johnston to get the action underway. Johnston was off first and never trailed with a hard-charging 4.55 at 161 mph to Stubbe’s 4.60 at 157-mph effort. Next, Fisher used a starting-line advantage and 4.569 at 161 mph to take out Lastor’s quicker 4.568 at 160 mph in one of the quickest side-by-side passes in X275 history. 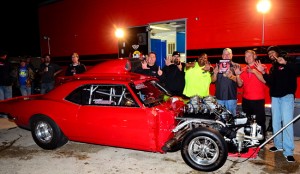 The next pair saw a little history being made as Moyer went red, but Curry ran an unbelievable 4.519 at 161 mph in his bright red ’68 Camaro to become the world’s quickest small-block-powered X275 machine. In the final pairing, Luong blasted to a 4.56 at 160, but lost to a holeshot by Moore that allowed his 4.60 at 157 mph to advance.

The highly anticipated semi-finals paired up Johnston and Fisher along with Curry and Moore. Everyone in the house—fans, racers, crew members, even announcer Chris Dingman—expected to see another world-record pass. After Johnston and Fisher crept into the beams, Johnston was off first while Fisher went into a wheelstand and was not going to lift. As they passed the split, Fisher was running wide open with his front end dangling three feet in the air, but Johnston pulled away to post a 4.56 at 161 that advanced over Fisher’s wicked 4.62 at 156 mph.

Curry and Moore were up next as Curry was looking to have the first small block in the 4.40s, but he could only muster a 4.63 at 150 mph with piston parts scattering in the lights as he headed toward the final against Johnston.

The damage to Curry’s machine was extensive and Johnston gave the team an hour-long grace period in which Curry and company elected to try and swap motors. Team members from several camps all joined in the thrash to get the blown-up motor out, then install and warm-up a new bullet within the allotted time. They came up short, however, even after Johnston waited longer than initially promised. The call went out for Johnston to fire his machine and his Missouri-based team posted a stellar 4.54 at 158 mph to secure the X275 win and a hefty $5,000 winner’s purse.

In X275 second-chance action, Kenny Hubbard used a 4.72 at 150 mph to defeat Brad Medlock’s 4.84 at 151 mph to take home the win. The Limited 275 class was a real crowd pleaser with multiple bumper-dragging wheelstands throughout the event. In the final round, Brent Gibbs clicked off a 4.93 at 147 mph to narrowly defeat Keith Moyer’s 4.95 at 141 mph. John Erwin took home top honors in 5.80 index and Mike Harris went home with the win in the 6.60 index class.

Next year will bring more of the same kind of action to North Texas as the dates of Mar. 12-14 and Oct. 8-10, have already been reserved for X275 competition.