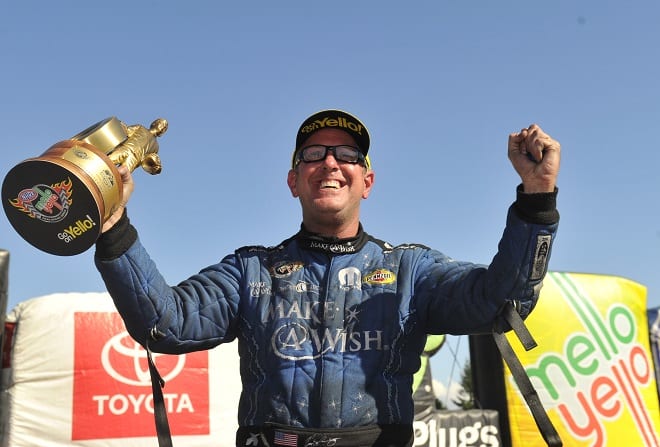 Johnson Jr. took out the 2012 world champ in the semifinals after red-hot Beckman’s record-setting machine, which was riding a two-race winning streak, dropped a cylinder at the hit of the throttle. Johnson Jr. moved on to the final where he recorded a performance of 4.073 seconds at 308.00 mph and used a holeshot victory to defeat Del Worsham. The win was Johnson Jr.’s second of the season and 12th of his career (10th in Funny Car). With the result, Johnson Jr. becomes the third driver to win an event in both Top Fuel and Funny Car at Pacific Raceways. 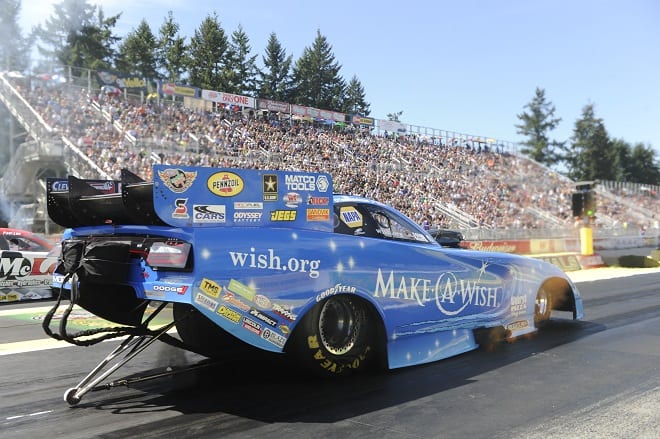 “We’ve got the most consistent car,” said Johnson Jr, driver of the Make-A-Wish Dodge Charger R/T, who raced past Paul Lee, Chad Head and Beckman in the first three rounds. “The last seven races including this one, we have been to four finals. We’ve got a really good car and team. We struggled early in the season with stupid stuff that bit us. Everybody has stepped up to the plate lately and it is showing.”

Worsham, one of the three drivers to have a Top Fuel and Funny Car win at Seattle, was appearing in his third final of the season in the DHL Toyota Camry. He defeated John Hale, Tim Wilkerson and John Force en route to the final. Worsham is fifth in points.

In Top Fuel, Todd piloted his Red Line Oil dragster to a 3.820 at 322.04, defeating Shawn Langdon in the final. The win was Todd’s first of the season, first at Seattle and eighth of his career. He moves to sixth in points with two races remaining before the Countdown to the Championship playoffs. 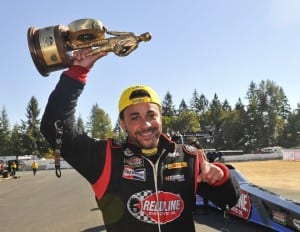 “It’s still so surreal that I’m driving for Connie Kalitta,” said Todd, who is in his second season with Kalitta Motorsports. “He’s done so much for the sport as a driver, owner and crew chief. I’m the luckiest guy out here. This is Connie’s personal toy and he takes a lot of pride in this car. I just love to be able to bring him trophies.”

Langdon advanced to his second final of the season after winning the season-opener at Pomona, Calif. The 2013 world champ was steady on Sunday, beating Antron Brown, Richie Crampton and Larry Dixon to advance to the final in his Knuckle Sandwich/Toyota dragster. Langdon moves to seventh in points.

Tony Schumacher remained in the series lead in Top Fuel, and holds an 87-point lead over Brown. Schumacher lost in the semis to Todd.

McGaha earned the victory in Pro Stock from the No. 1 qualifying position, defeating Jeg Coughlin in the final with a 6.507 at 212.59 in a battle between Chevy Camaros. McGaha picked up his first career win just last weekend at Sonoma, Calif., and ends the Western Swing with two wins in the three races.

“The fact that we’ve gotten on a roll here, it does give us a legitimate chance at the championship,” said McGaha. “I’ve seen guys in the past maybe peak too early. I don’t know if we’ve peaked too early or not. I don’t really care at this point either… I have 100 percent confidence in my crew chief [Brian “Lump” Self] and I always have.” 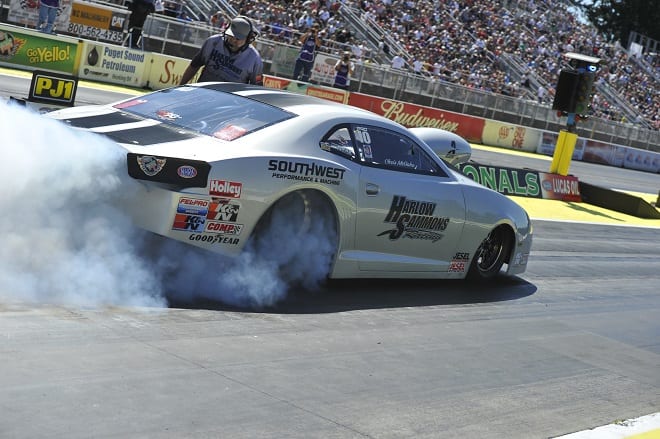 Coughlin was appearing in his first final of the season. The five-time world champ is running a limited schedule for Elite Motorsports this season. As the No. 2 qualifier, Coughlin eliminated Aaron Strong, Erica Enders and Allen Johnson to reach the final.

With the victory, McGaha moves to third in points and also secured a berth in the Countdown to the Championship. Greg Anderson, who lost in the second round to Shane Gray, continues to lead the points, and holds a 51-point lead over defending world champ Enders.

In addition to McGaha, Funny Car’s Beckman was the only other driver this weekend who earned a spot in the Mello Yello Countdown to the Championship, NHRA’s six-race playoffs that begins Sept. 18-20 at zMAX Dragway in Charlotte, N.C.