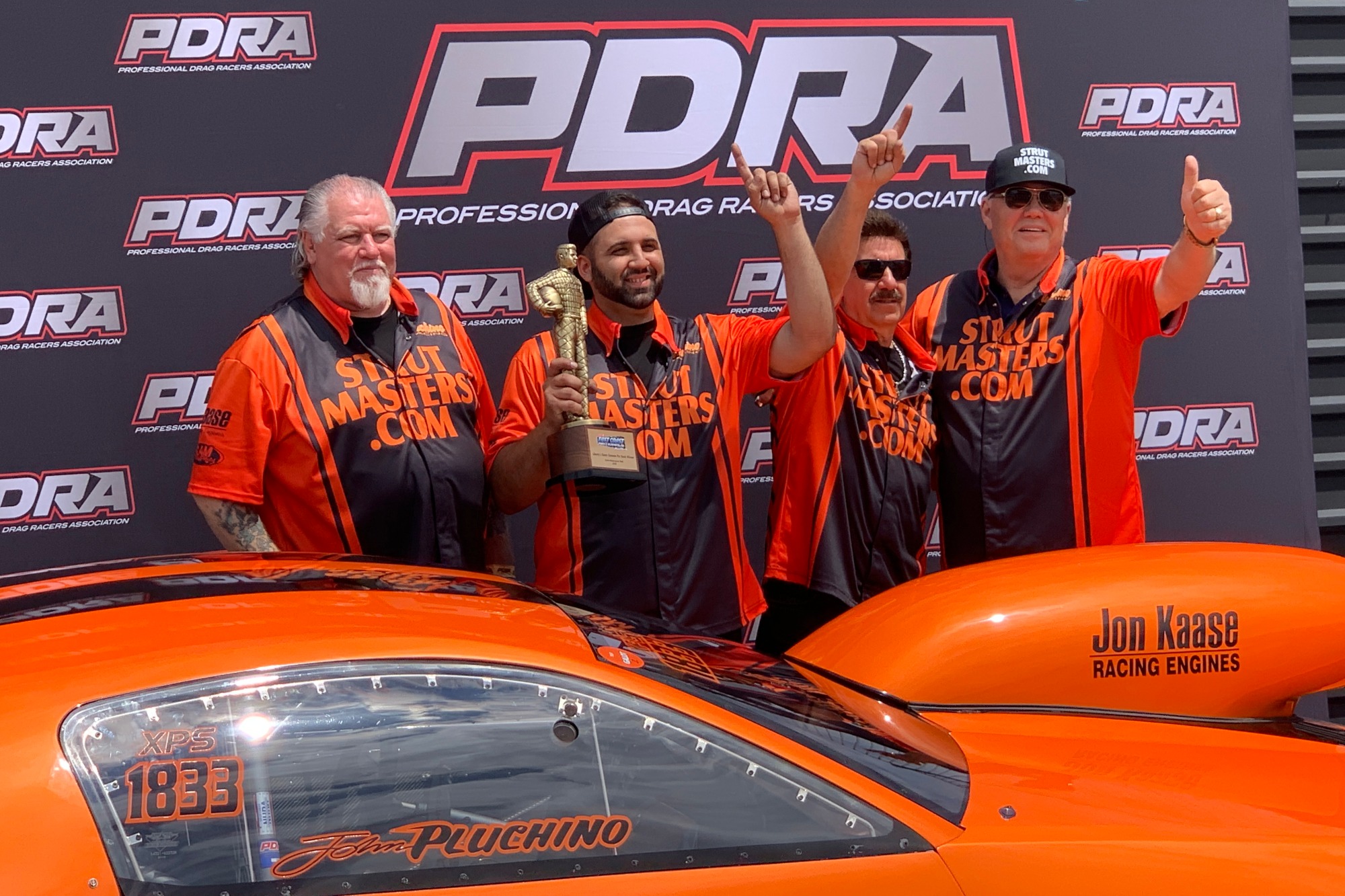 Back-to-back PDRA Pro Outlaw 632 world champion Johnny Pluchino’s quest for an Extreme Pro Stock title kicked off in ideal fashion at the PDRA East Coast Nationals at GALOT Motorsports Park over the weekend. The second-generation Mountain Motor Pro Stock driver picked up his first event win in the class, defeating Elijah Morton in the final round.

“We have high goals and high expectations for this year,” Pluchino said. “I had a feeling a win would come this year. I didn’t know it would come at the first race. I should’ve expected it since we’re at GALOT – this place is gold to me. I wish they ran every race here. To do it here, to do it right away, to start off the championship chase here and put this weekend together, it’s awesome.”

Like the rest of the PDRA, Pluchino and his Strutmasters.com team haven’t raced since October, as the COVID-19 crisis postponed the season-opener by two months. The extended offseason gave Pluchino plenty of time to refresh and upgrade his Jon Kaase Racing Engines 825ci engine in the team’s 2013 Mustang.

The work paid off, as Pluchino and his father, 2016 world champion John Pluchino, got the Mustang back to the quick, consistent performance level it was running at when the elder Pluchino won the 2019 East Coast Nationals.

“This thing was a bracket car all weekend,” Pluchino said. “We were just working on getting it early. It was running tons of speed thanks to Jon Kaase Racing Engines, but we had to get it in 60 foot. We were getting a little better every run.”

Pluchino qualified No. 5 in the eight-car field with a best of 4.12 at 176.97 after two qualifying sessions.

“I didn’t want to swing for the fence and try to make it too good early and shake the tires,” Pluchino said. “We’re racing and trying to improve the car at the same time, which is tough. To come out here and be holding this trophy first race of the year, it feels great. It’s time to get a championship ring, Pro Stock style.”

The Pluchinos and crew member Brud Beneke shared the winner’s circle experience with Chip Lofton, founder and owner of Strutmasters.com. Lofton made the drive over from Strutmasters.com headquarters in Roxboro, N.C. to support Pluchino and the other teams he sponsors.

“Chip is way more than a sponsor at this point,” Pluchino said. “To share a trophy with him in the winner’s circle, I can’t describe it. We had some engine failure on the dyno over the winter that really cost us. For a small team, it’s really difficult to even do this. When things aren’t going 110% and you have something like that happen that kind of sets you back, it’s event tougher. We wouldn’t be here without Chip and Strutmasters.com.”

“I truly have to thank everybody who came on board with us and supports us,” Pluchino continued. “Hoosier Tires, NGK Spark Plugs, Precision Racing Suspension, Book Racing Carburetors, Jon Kaase Racing Engines, Ram Clutches, and obviously Strutmasters.com. This is a team deal and I just happen to be the one holding the steering wheel.”