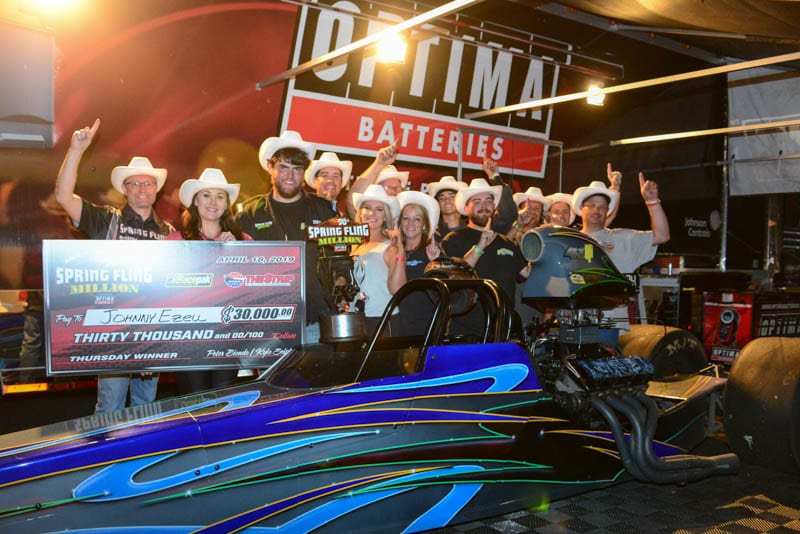 There was price on Kevin Thorp’s head after his win last night in the Maytag/Silverstate Refrigeration Wednesday portion of the K&N Spring Fling Million presented by Optima Batteries. The person who beat him in any round of eliminations today earned themselves a Racepak Sportsman Data Logger.
That person ended up being Dane Ward who took out Thorp in the very first round.
Once again, a time trial session was held for new entries only and by 8:30 in the morning, eliminations began for Racepak Thursday. Maytag/Silverstate Wednesday had 562 entries making the first round. Today, that number increased to 586 entries making the first-round call, which precipitated another five-hour first round.
It was four years ago when co-promoters Pete Biondo and Kyle Seipel instituted a Pro38 footbrake class to the line-up in the Spring Fling Million. The select group of footbrake racers race each other until a winner is crowned, after which that person advances to the sixth round of the Super Pro class in addition to receiving a $500 bonus over and above whatever round money they earned. Last night’s Pro38 winner was two-time NHRA Stock Eliminator champ Brad Burton who advanced to the quarterfinal round against a sea of delay box racers. Tonight’s Pro38 winner was many-time big money race winner “Nasty Nick” Hastings who dispatched another heavy hitter in Ryan Mangus with a .019 package for the win.

The remaining ten racers set on a ladder for round seven were Wes Anderson, John Labbous, Donny Burleson, Trevor Larson, Kurt Gross, Paul Lofton, Tim Wurtz, Johnny Ezell, Scott Hern, and of course Hastings. Survivors of that round were Larson, Ezell, Burleson, Hastings hanging tough off the bottom bulb, and Labbous who used a .005 reaction time to earn the odd car bye run in the quarterfinals.
Transferring into the semifinals with wins in round eight were Ezell, Larson and of course Labbous on the bye run. For the semis, Ezell will advance into the final with the bye run based on his .006 reaction time and dead-on the dial with a “0”.
For the semis, Larson and Labbous faced off for the right to run Ezell for the Racepak Thursday trophy and accompanying $30,000 that goes with it. Looking to add a fifth Spring Fling trophy to his impressive resume, it was not to be as Labbous turned on the red-light to advance Larson who left the line with a .030 reaction time. On his bye run, Ezell scored a .009 reaction time to give him lane choice in the final based on reaction time.
Ten rounds of racing, 586 entries and some 13 hours later, the Racepak Thursday final was set with two tough competitors. By virtue of his dial-in, Ezell left the line first with an .010 light and never looked back, running a 4.754 on a 4.74 for an .008-second advantage at the finish line over Larson.