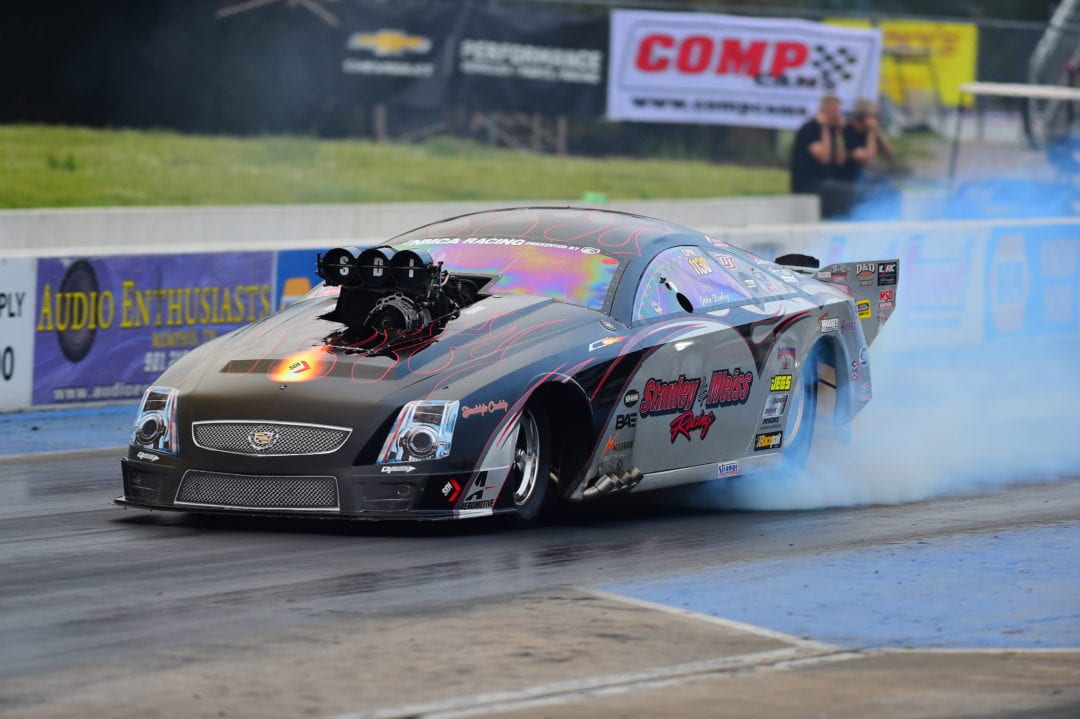 While the forecast wasn’t favorable, racers still rolled into the Inaugural Comp Cams NMCA Memphis Homecoming, May 2-5 at Memphis International Raceway in Tennessee to vie for valuable championship points and the Victor trophies awaiting them in the Aerospace Components Winner’s Circle.

In VP Racing Fuels Xtreme Pro Mod, where the cars tend to be unruly and unpredictable, Don Walsh Jr. wheeled his Corvette to a 3.70 to set the pace, and later motored to a final-round fight against John Stanley and his Cadillac CTS-V. Walsh’s Corvette made a move toward the centerline and he brought it back, but Stanley sailed to a 3.79 to take the win over Walsh’s close 3.81. The feat marked Stanley’s first win in the highly competitive category.

Rob Goss ran to a 4.30 in his Challenger to lead qualifying in NMCA Mickey Thompson Street Outlaw, but it was Shawn Pevlor and Mike Cerminaro who made it to the final. Pevlor picked up the win in his Mustang, which belongs to Tony Bischoff, with a 4.40 while Cerminaro wasn’t able to complete his pass. 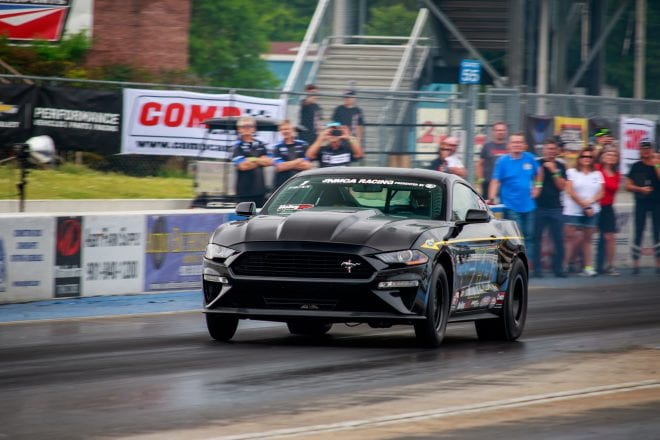 Holley EFI Factory Super Cars saw Bill Skillman blast to a 7.85 to set the pace in his Mustang Cobra Jet, and several rounds later, he slid up alongside Geoff Turk and his X-15 Mustang Cobra Jet in the final. The drivers were close on the tree, and Turk took the win with a 7.81 over Skillman’s close 7.84.

The nitrous purges were plentiful in ARP Nitrous Pro Street, and Don Baskin celebrated early by cruising to a 4.56 in his Camaro to lead qualifying. In the final round, however, his car pushed through the beam, and Tricia Musi motored to a 5.39 and the win in Mike Bankston’s Camaro, as her Firebird was down.

Joel Greathouse grabbed a 4.66 in his Mustang to lead qualifying in the ever-electrifying Edelbrock Xtreme Street. He was focused through the final, where he flew to a 4.69 to take out Tim Knieriem, who ran 4.75 in his Mustang.

In FST Carburetors NA 10.5,where engines make marvelous music, Rich Nye nailed a 7.81 in his Mustang to lead qualifying for the first time and to achieve a personal best. He remained on a roll and rocketed to the win with a 7.93 over Don Baskin, who was 8.15 in his Cobalt. It was Nye’s first trip to the Aerospace Components Winner’s Circle in NA 10.5 competition. 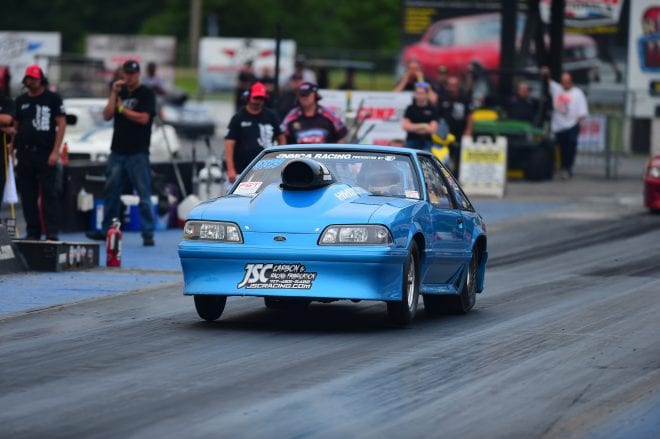 In Chevrolet Performance Stock presented by Scoggin-Dickey Parts Center, Haley Burkhammer hightailed it to a 10.16 in her Camaro to set the pace. She made it all the way to the final, where she rolled up alongside reigning class champion Jesse Wilson and his Camaro. All eyes were on them as they raced toward the finish line, and Wilson earned the win with a perfect .000 reaction time and a 10.23 over Burkhammer, who was not quite as quick on the tree, but was quicker on the top end with a 10.19.

Rick Rodgers ran to an 8.72 on a 10.10 index in his Mustang Cobra Jet to lead qualifying in Coan Engineering Stock/Super Stock Combo, but it was Scott Libersher who lapped up the win with a 9.17 on a 9.18 in his COPO Camaro over Dennis Breeden, who also broke out with a 9.43 on a 9.44 in his Challenger.

In Quick Fuel Technology Nostalgia Super Stock, TD Holland hooked a 10.00 on a 10.00 in his AMX to lead qualifying, but reigning category champion Kevin Gass gunned to a 9.73 on a 9.75 in his Chevelle to win over Doug Poskevich, who also broke out with an 11.93 on a 12.00 in his Fairlane.

Detroit Truetrac Nostalgia Muscle Car, which oozes old school cool,  saw Steve Wilson secure a 10.50 on a 10.50 in his Nova to lead qualifying. Making it to the final, however, were reigning category champion Andy Warren and Tim Clark. Warren wrapped up the win with a 10.31 on a 10.25 in his Caprice, while Clark was 10.03 on a 10.00 in his Chevelle. 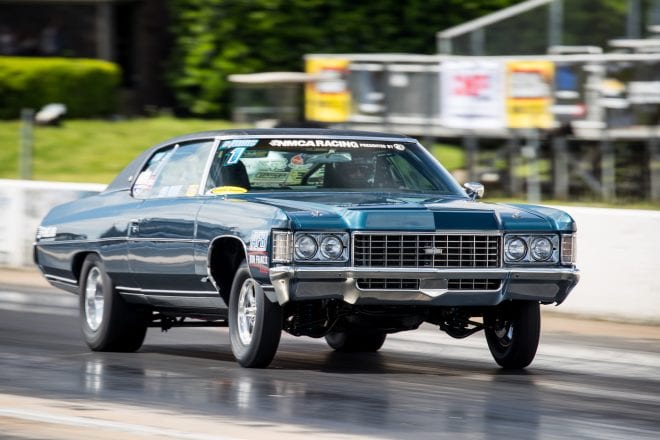 Charlie Atkinson recorded a perfect reaction time in his Mustang to lead qualifying in MagnaFuel Open Comp, but the final round featured Cameron Bowles and his grandfather Don Bowles’ Maverick, and Susan Roush McClenaghan and her Mustang. It was Bowles’ second trip to the Aerospace Components Winner’s Circle this year with a breakout time of 9.23 on a 9.26 after Roush McClenaghan turned on the red.

The ATI Performance Products Muscle Car Madness presented by Deuce Machining made its debut at this event, and it put the spotlight on the top ten qualifiers in Detroit Truetrac Nostalgia Muscle Car, Quick Fuel Technology Nostalgia Super Stock and Coan Engineering Stock/Super Stock, plus two wild cards, in a 32-car shootout. When it was all said and done, Andy Warren won with a 10.28 on a 10.25 in his Caprice over Bruce Lang, who broke out with a 9.71 on a 9.75 in his Barracuda. Remarkably, it was Warren’s second win of the weekend, as he also earned a trip to the Aerospace Components Winner’s Circle in Detroit Truetrac Nostalgia Muscle Car.

More and more drivers with 2005 and newer Gen III-powered Challengers, Demons, Hellcats, Chargers, 300s and Jeeps are discovering the Dodge // Mopar HEMI Shootout at NMCA events this year, and Dodge // Mopar covers the cost of the entry for the first 75 drivers who register for the category. At this event, Herb Yellowdy was the overall winner with an 11.14 average while Lee Segars was the runner-up with an 11.94 average. Jeff Smith was the 12-second winner, Ken Mason was the 13-second winner, Joe Giordano was the 14-second winner and Jessica Rickey was the 15-second winner. Later, the eight quickest drivers in the category came together for the Arrington Performance HEMI Quick 8 presented by Red Line Oil, and when the dust settled, Yellowdy landed the win with an 11.04 in his Challenger while Smith was 11.97 in his Challenger.

Next up on this year’s NMCA tour is the highly anticipated 14th Annual Nitto NMRA/NMCA Super Bowl of Street Legal Drag Racing, July 25-28 at Route 66 Raceway in Illinois, where NMCA drivers will mix it up with NMRA drivers. For more information and Advance Ticket Sales, visit www.NMCAdigital.com/IL