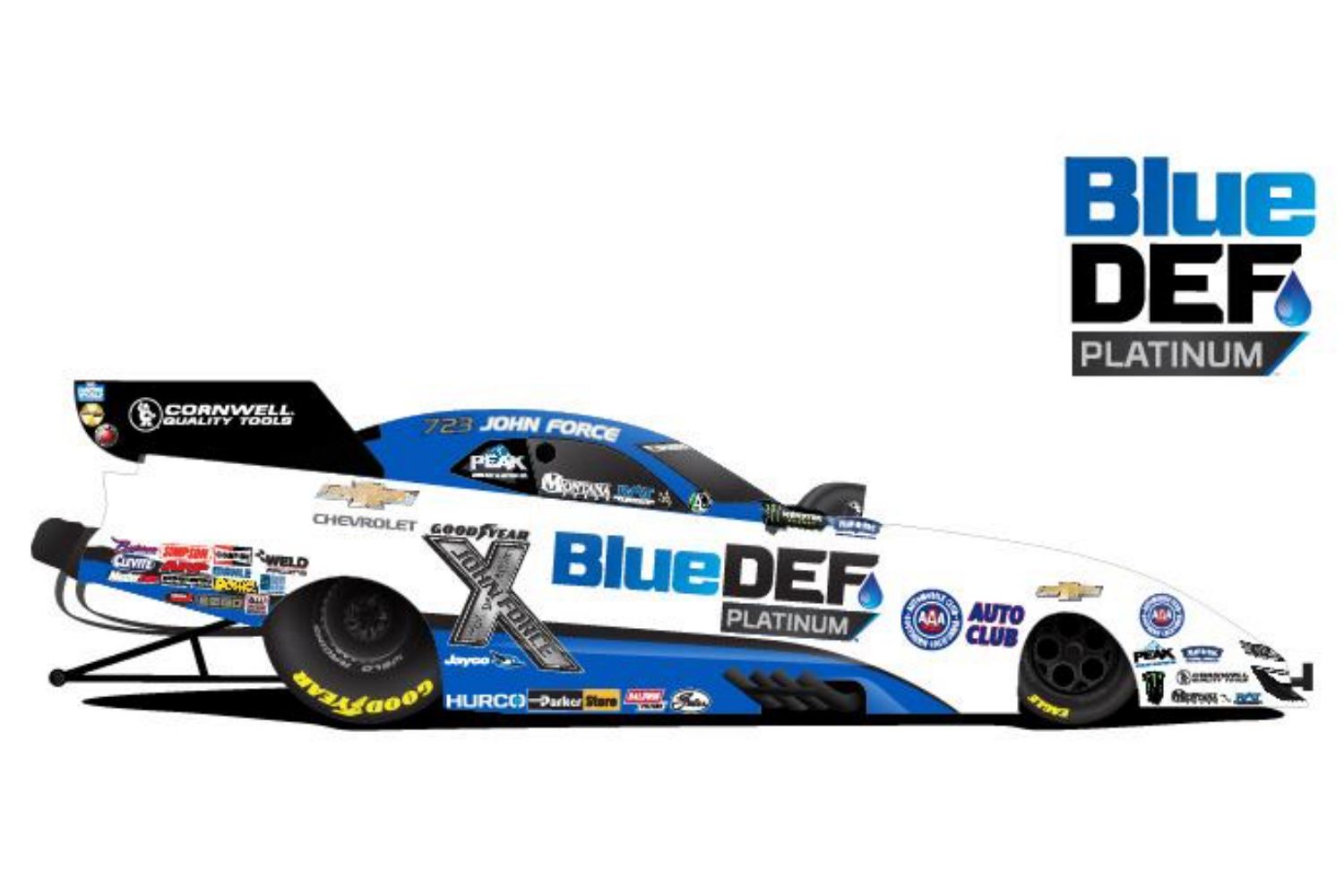 To begin the 2021 NHRA Camping World Series season, BlueDEF PLATINUM™ will be emblazoned on the side of 16-time Funny Car world champion John Force’s Chevrolet Camaro SS Funny Car.
In coordination with Old World Industries, the parent company of the PEAK and BlueDEF brands that have been the title sponsor on the legend’s car since 2015, Force will be in slightly different colors when he makes his Camping World Series debut in Gainesville. Swapping the lime green for dark blue and black featuring OWI’s newest product, BlueDEF PLATINUM, Force’s Chevy Camaro will match the promotional materials used by Chevy and BlueDEF’s collaborative BlueDEF Chevy Silverado Diesel sweepstakes from 2020.
“I’ve been looking forward to getting back to the racetrack and to be doing it with BlueDEF PLATINUM and PEAK Performance makes it even better. BlueDEF worked with Chevy and gave away a Silverado last year and now I finally get to the race the car that goes with it.” said Force, winner of 151 national event titles, the most in NHRA history. “They’ve stuck with me while we worked promotions away from the track, now it’s time to bring this car out and get back to business. My car may look just a little different and this season out at the track may look a little different but it’s the same old John Force with PEAK / BlueDEF and Old World Industries supporting me.”
“I think I speak for everyone at Old World Industries when I say that we are excited to have the John Force Racing team back in 2021. Last year we partnered with Chevrolet for the BlueDEF Chevy Silverado Diesel sweepstakes and we’ll start the season with John running that paint scheme to match,” said Brian Bohlander, Director of Marketing – Sports and Partnership. “It’ll be great to finally see John and his team on track in this BlueDEF PLATINUM car which was originally scheduled to debut last year at the Gainesville event.”
BlueDEF PLATINUM features new ADVANCED SYSTEM SHIELD™ TECHNOLOGY, which significantly reduces harmful deposits that commonly build up in modern diesel exhaust systems with SCR. With regular use, these harmful deposits are significantly reduced, providing optimum fuel economy, saving money on costly repairs, and sustaining the life of the system. BlueDEF PLATINUM is manufactured under ISO 22241 guidelines to ensure the highest product quality and is API registered, meeting or exceeding OEM specifications for diesel exhaust fluid. To learn more about this exciting innovation, go to www.BlueDEFPlatinum.com.