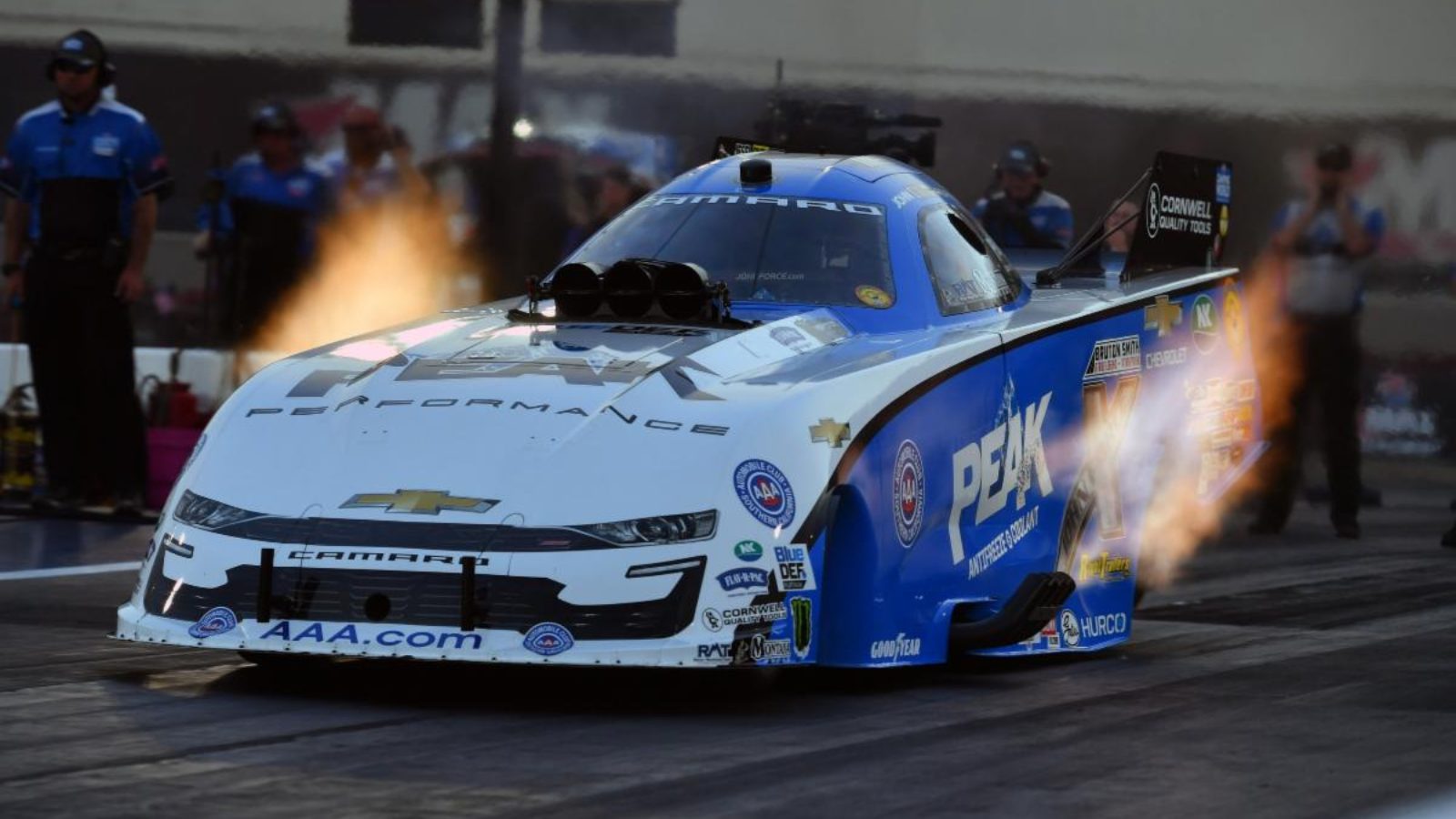 John Force and the PEAK Antifreeze and Coolant Chevrolet Camaro SS sit in the provisional No. 1 spot Friday at the Betway NHRA Carolina Nationals at zMAX Dragway. Robert Hight and the Automobile Club of Southern California Chevy currently sit No. 3 while Brittany Force has the Flav-R-Pac / Monster Energy dragster No. 4 and Austin Prock has the Montana Brand / Rocky Mountain Twist dragster sitting No. 12.

Sitting fourth in points, John Force handled the PEAK Chevy to a stout 3.854-second pass at 330.47 mph, just three thousandths off the track record elapsed time. The PEAK Camaro will pick up three valuable bonus point for being quickest of the session.

Sad to come here without Bruton Smith. I think all the racers feel that way. Have to thank his family for moving forward and keeping us racing at these great race tracks that let us come up here and run those numbers. There’s a stack of drivers behind me who can run that or better, especially if we have similar conditions, everyone will turn up the wick tomorrow,” Force said. “This PEAK Chevy is coming around, got a lot of work to do here in the middle of the Countdown. Danny Hood told me it was going to run mid-3.80s and it really went, moved around a little past half-track but I think I was over steering. Really good job to my crew chiefs, Danny Hood and Tim Fabrisi and the whole brain trust over at John Force Racing.”

With an 81-point lead in the Funny Car standings, Robert Hight and the Auto Club team picked up another bonus point with their 3.864-second pass at 331.45 mph that was third quickest of the Friday evening session.

“I said we had to pick up points every qualifying run and we did just that. Not a bad start to the weekend for the Auto Club Chevy. Tomorrow afternoon will be important for race day, hopefully similar conditions,” Hight said. “We got it down there and have a good starting point. Jimmy Prock and Chris Cunningham and the whole Auto Club team have done a great job and they’ll keep it going.”

Brittany Force and the Flav-R-Pac dragster had a solid run Friday evening to land in the No. 4 spot with two sessions left. Force would handle the David Grubnic and Mac Savage tuned hot rod to a 3.712-second pass at 297.29 mph.

“Qualifying here in Charlotte and zMAX Dragway. In the first session this Flav-R-Pac dragster was on a killer run but it moved around down there, got too close to the wall and I had to pull my foot out of it. It still put 3.71-seconds on the board, which currently puts us No. 4,” Force said. “We know we can get the car down there, we get two more runs tomorrow so our plan is to definitely step it up and get us back to the top.”

Coming off his first win of the season, Austin Prock and the Montana Brand / RMT dragster would drive into smoke side-by-side with Steve Torrence, shutting off to run only 5.887 at 107.70.

“Not the way this Montana Brand / Rocky Mountain Twist team wanted to start out here but we will come back swinging tomorrow,” Prock said. “I’m confident we will be able to get into the top half and stay. Looking forward to the next shot at it.”

Competition at the Betway NHRA Carolina Nationals at zMAX Dragway, the second of six NHRA Countdown to the Championship races, continues with qualifying Saturday at 2:15 and 6:00 p.m. Eliminations are slated for Sunday at noon. Television coverage of the event will be on FOX Sports 1 (FS1) and continues with a second qualifying show Sunday at 2 p.m. ET with eliminations coverage at 3 p.m. ET.