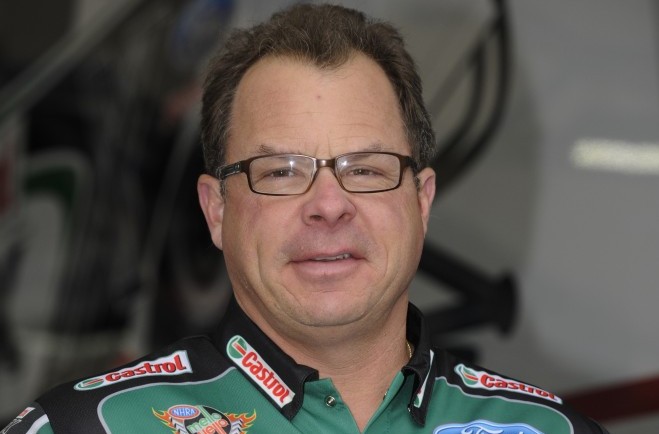 “Yesterday Jimmy Prock told me he was resigning at end of the season and John Force Racing chose to accept his resignation as of today. My No. 1 goal was to keep the people that I have built this machine with over the past three decades. I am working with JMI and we are making progress to be where we need to be financially. We have a major announcement at the Las Vegas race and possibly some announcements at SEMA as well as into the off-season leading right up to the Winternationals in 2015. When I lay out a plan I stick with it.

“I started hearing rumors after the St. Louis race. I understand people have to do what they need to for their families. I got a call from a team owner this week as a courtesy so I would know that some of my employees were addressing him and looking for jobs now. I told the team owner that I understand this business and they needed to do what they needed to do and I hung up. I was surprised, though, that this was going on during the Countdown – but business is business,” said Force.

“I spoke with Jimmy and he let me know that he was probably leaving JFR at the end of the season for another opportunity. A man has to do what a man has to do but I have sponsors that I am signing contracts with that look at JFR as a four-team powerhouse and here I have people not committed to this team, long-term. They are willing to walk away from me. I can’t promise my people what I don’t have.

“No one is at fault here and I am not blaming anyone but John Force is going to do what he always does; I am going to make a change. As of today, Jimmy Prock will no longer be employed by John Force Racing. He has done a great job for me and I give him a lot of respect. I wish him well. I am not sure if some of my crew members will also be leaving but if they choose to leave I wish them luck. I have to honor my new sponsors and the sponsors that have stood by me as I may possibly have to build a team to finish the Countdown,” said Force.

So far this season Force has three Funny Car wins, seven runner-up finishes and a win at the lucrative $100,000 Traxxas Nitro Shootout.

“As much as I want No. 17, not even for a championship will I race with somebody that I know is leaving me. I am a big boy and I’m going to put this team back together. I am going to fight, win or lose. If we get No. 17, great, but if we don’t I know I will have gone down with people that believe in me, that trust in me and that will stand by me, not just in good times but in bad times. I am not just racing for this championship; I am racing for the next ten years.”

In 2013 Prock took over tuning duties for Force after a mid-season team swap orchestrated by the team owner that saw Prock leave long time driver Robert Hight. He tuned the winningest driver in NHRA history to five consecutive final rounds in the Countdown including three wins in a row to clinch Force’s 16th Mello Yello Funny Car championship.