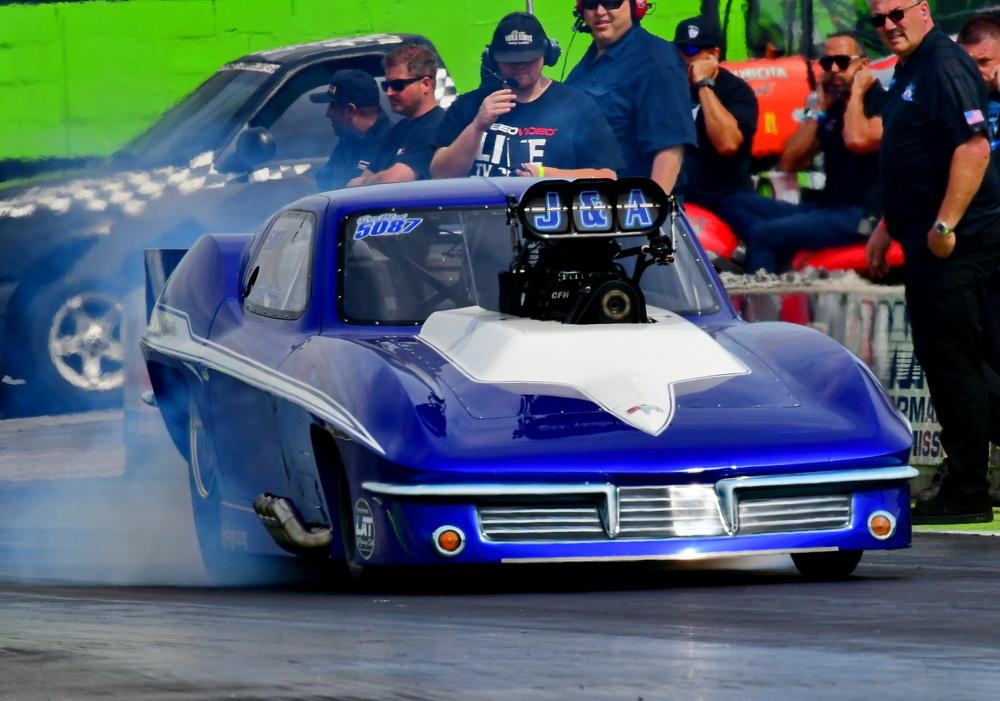 While Jim Whiteley partnered up with Stevie “Fast” Jackson and the Killin’ Time Racing (KTR) brain trust of Phil Shuler and Billy Stocklin last season, the Pro Mod racer is really starting to see the benefits of teaming up with the NHRA Pro Mod defending world champions. After two sessions at the inaugural Drag Illustrated World Doorslammer Nationals presented by CTech Manufacturing, Whiteley is qualified No. 6 out of 33 cars with a 5.73 at 246.30 in his roots-blown J&A Service ’63 Corvette.

Whiteley, who has one win in NHRA Pro Mod after joining the series in 2014, attributes the early success to the KTR team’s experience with torque converters and automatic transmissions.

“I’m a clutch racer, [Jackson] has been racing automatics forever, and that’s where it’s at,” said Whiteley, a two-time NHRA Top Alcohol Dragster world champion. “To have that in our camp, I think I have the best. It shows. The car goes down the track, and it’s pretty quick early. If we figure out the back half, we can be a competitive player.”

Whiteley’s Corvette showed promise during testing at Orlando last week. Jackson handled the driving duties, as Whiteley was working and his wife, Annie, was racing her Top Alcohol Funny Car at an NHRA divisional race in Belle Rose, Louisiana. Jackson clicked off a best of 5.72 in the ‘Vette, so Whiteley’s 5.73 in the first qualifying session wasn’t a surprise.

Still, the YNot Racing and KTR teams had to make adjustments after the test session to get the car set up for Whiteley.

“We just kind of had to change the thing back around because we couldn’t get the weight down to where he was at,” Whiteley said. “It’s coming around real well and they really have an A-to-B program. The car goes down the racetrack every time. I’m real excited aboout what we’re doing with this thing and where we’re going.”

Whiteley pedaled the car and let out early during Saturday’s Q2 session. He expects the field to pick up in the cool conditions. Pro Mod will run two more qualifying sessions on Saturday, scheduled for 3 and 6 p.m.

“I’m not sure where we’ll end up,” Whiteley said. “Everyone will pick up 3-4 numbers (Saturday). We’ll see the top half of the field in the .60s. It ought to be real exciting. We’ll see what the ProCharger cars will do when they open ‘em up. It’s going to be exciting, and I’m looking forward to it.”

Qualifying for the Drag Illustrated World Doorslammer Nationals presented by CTech Manufacturing includes one session at 6 p.m. on Friday, three on Saturday at 12, 3 and 6 p.m., and eliminations begin at 11 a.m. on Sunday. It will all be streamed live on SpeedVideo.com.