John Force’s Castrol GTX High Mileage Ford Mustang commemorating his induction into the International Motorsports Hall of Fame and the Auto Club Ford Mustang driven by two-time U.S. Nationals winner Robert Hight (above) will be on display getting fans and travelers getting revved up for the biggest NHRA Mello Yello Drag Racing Series event in the country.

“We are excited to be back in the Indianapolis Airport with two of our Funny Cars. This is the biggest weekend of our season and to be able to show off two of our Castrol and Auto Club Funny Cars is a great honor,” ,” said John Force, a four-time Chevrolet Performance U.S. Nationals winner.

“We are right in the middle of the airport so everyone will see our race cars and the videos from our kiosks. It is a great opportunity for the NHRA and for our sponsors.

“There will be a lot going on this week in Indianapolis but everyone’s race weekend will start when they see our Funny Cars. I know I got pumped up when I saw them on Tuesday,” Force added. 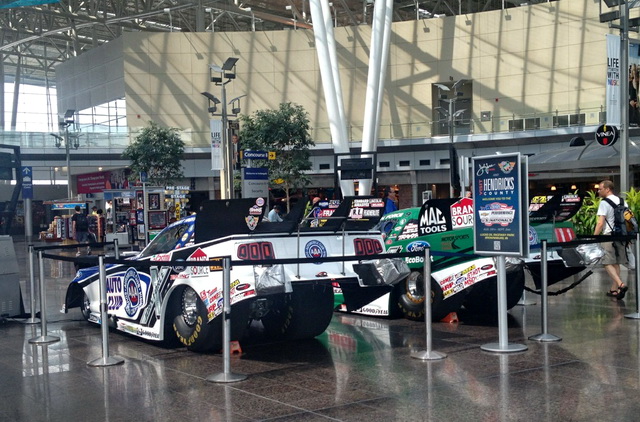