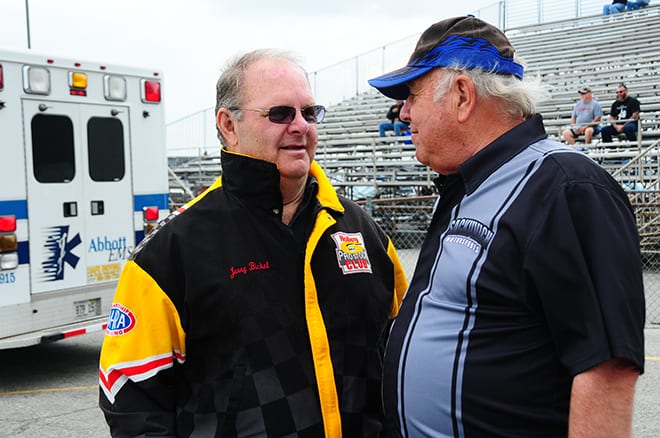 For decades Jerry Bickel built many of the top Pro Stock machines in the nation, but most recently his Jerry Bickel Race Cars (JBRC) has become the predominant choice among Pro Mod teams.

JBRC cars have claimed multiple championships in both NHRA and IHRA Pro Stock over the years, and have now started racking up various Pro Mod championships, including the 2013 and 2014 NHRA Pro Mod championships for Rickie Smith and the 2014 PDRA Pro Boost season title for Todd Tutterow and last year’s Pro Extreme championship for Bubba Stanton. JBRC entries have also finished on top in the Arabian Drag Racing League and Super Chevy Show series.

Bickel himself is quick to give credit to his customers, but it’s clear the incredible facility in Moscow Mills, Missouri, where the JBRC missiles are crafted with the latest in chassis technology, a temperature-controlled paint booth and a huge inventory of ready-to-ship components, as well as his crew’s impeccable workmanship, are major contributors to securing multiple national and worldwide event victories and series titles.

And judging by the caliber of drivers and teams with new JBRC cars on the way, that list is sure to grow. During the 2014-’15 offseason alone, JBRC has produced new whips for Bob Rahaim, Troy Coughlin, Kevin Rivenbark, Johnny Rosso, Todd Moyer, Jason Scruggs, Clint Satterfield, Mike Castellana, Rickie Smith and Jose Gonzalez, to name just a few.

Bickel credits his machines becoming the weapon of choice in Pro Mod with the increased need for more technical chassis and components. “We carried the workmanship and techniques [of NHRA Pro Stock] over to Pro Mod and that’s something they never had before,” he explains.

Several Bickel-built entries had been campaigning in Pro Nitrous for several years, but JBRC has recently picked up several customers in the Pro Extreme and Pro Boost ranks.

“Those are our newest chassis designs,” he says. “Anytime we’re developing a new class there’s a challenge to make the stuff better. You have to be on the leading edge and be willing to try things. I guess all those classes we’re involved in now we’re doing the same thing we were in Pro Stock. We try to be on the leading edge. We come up with new stuff to make the cars better. Hopefully every car we build is better than the last one. We actually have a chassis design for the Pro Nitrous cars, a chassis design for Pro Turbo cars and one for the Pro Extreme blower cars. Each chassis is different and unique in its own way.

“I sell used cars as well and you get a lot of guys that want to buy a used car that was used for blower, and they want to run it with a nitrous engine. I discourage that because if you’re going to be competitive and run against the guys that have a purpose-built chassis in those classes, you need to have one as well. It’s pretty important to have something that’s designed for what you’re trying to do,” Bickel stresses.

“It’s gone beyond buying a used car, putting a big engine in it and running any class you want. The technology has changed so much that if you’re going to be competitive you have to have at least as good of equipment as the guy you’re racing against.”

Singling out the differences in the approach to turbo, nitrous and blower cars has helped JBRC become the preferred Pro Mod chassis builder, Bickel says. Add to that his commitment to staying on the forefront of technology and innovations and it’s easy to see what makes him a leader in the industry.

“We don’t really make major changes. We try to make small, subtle changes,” Bickel says of the JBRC approach. “In a year’s time that becomes major changes. That’s the one thing I’ve found in this sport, it’s very important to stay on the leading edge, but you don’t want to jump ahead of yourself.

“The way technology has affected the way we do things is unbelievable,” Bickel continues. “The computers, the design stuff, the capabilities of the machining stuff, the tooling that we use, it’s a day-and-night difference from where we started. When we started it took so much longer to build the cars because everything was done by hand. Now it’s all automated. If you had asked me back when I started this thing day one if I would be able to build a car in five weeks, I’d laugh. It took us five months then.”

It’s no coincidence that Bickel’s growth in building Pro Mod chassis has come when the Pro Stock division seems to be struggling to breed new teams. As a leading chassis manufacturer in the NHRA Pro Stock division, Bickel’s concern on the overall health of the class is similar to thoughts echoed by other manufacturers and racers.

“The NHRA Pro Stock class, in my opinion, has gotten out of hand as far as the engine technology,” he says. “It costs so much to run that class. An example I use is that a pro golfer can buy a set of golf clubs for 500 bucks. He can go out there and win $250,000 to $1-million. In Pro Stock you invest $2-million to win $10,000. The problem that I see in Pro Stock—and NHRA knows they have a problem—is that the cost of developing the technology has gotten so high that there’s not sponsors out there for these guys that are willing to invest the kind of money it takes to be competitive.”

Bickel laments that even sponsored Pro Stock cars typically also have wealthy investors who enjoy the sport but are not necessarily reaping any benefit from media exposure like a traditional sponsor would value. “It’s turned that class into a rich man’s sport,” he says.

“Pro Stock has got a problem. I don’t know what they’re going to do about it. The participation has really fallen off. NHRA has actually opened it up to older cars just so they can fill their fields. The problem is there’s about eight or 10 competitive cars and there’s four bottom feeders that show up from local areas that fill the fields. And that’s just not good for the class.”

While Bickel sees Pro Stock facing some difficult hurdles, he doesn’t think it will affect the sport much as a whole. He believes drag racing is still on the rise and if the economy continues to show improvement and fuel prices remain down it will encourage racers and fans to travel farther and attend more events. And though the nitro classes remain the leading crowd pleaser, Pro Modified divisions have their own loyal followers and have gained new enthusiasts in recent years. Add to that a growing number of competitors and Bickel says Pro Mod is making great strides and gaining respect in the industry.

“The Pro Mod cars are much more interesting for the fans to watch because they’re out there with the flames coming out of the headers and they see blower cars, nitrous cars and turbo cars. They’re popping and banging and getting sideways,” he points out. “I see Pro Modified steadily growing.”

And as the level of competition in Pro Mod continues to rise, the number of Jerry Bickel chassis in those classes undoubtedly will be on the rise as well. As numerous champions—and their rivals—in classes across the industry can attest, a JBRC car is tough to beat.