Two of the most well-known and successful doorslammer chassis-building shops in the country are becoming one, as Jeffers Pro Cars joins forces with Garret Race Cars to begin doing business as Larry Jeffers Race Cars.

With a brand-new, 15,000-square-foot facility ready for occupancy early this summer, Jeffers Race Cars founder Larry Jeffers said he almost jokingly told fellow chassis man and longtime friend Garret Livingston that he finally had room for Livingston to move his 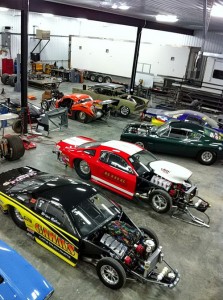 operation the 80 miles from Marble Hill, Missouri, to Jeffers’ new shop in House Springs. Jeffers remembers Livingston answered, “To be honest, I’m about there,” as he described the frustration associated with having to turn work away due to feeling overwhelmed.

“I knew exactly where he was coming from because it’s something I’ve had to deal with, too, so I told him whenever he felt ready to give me a call,” Jeffers said.

“Well, just a few weeks ago Garret asked me if I was really serious and after I said yeah, definitely, we sat down and hashed out everything, including the role he and his team would play here, his future, and the best ways to combine our experience and talents to take things to a higher level for both of us.” 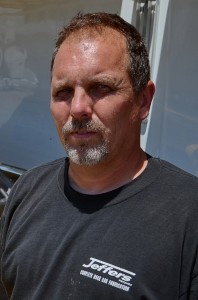 “Bottom line, we just want to build high-quality parts and cars in a timely manner,” Jeffers stated. “I think between us we can make a huge dent in the Pro Mod world—and in Pro Stock, too, where I’ve already got a few things going. I really believe this is a great move for me and a great move for him.”

“My name isn’t going to go away because I’ll still be going to the races with Larry; I’m part of that deal now. We’re going to join up and run the deal together and I think you’re going to see an even better product coming from me and Larry teaming up.

“I don’t really have an ego. It doesn’t matter to me as long as the cars we’re working on are winning. And Larry’s got some really nice stuff out there, really going fast the last several years. So this kind of thing is a smart decision for both of us.”

Jeffers said he and Livingston approach building race cars with a similar philosophy; that each one is different and each customer requires personal attention, so he expects those traits will lead to a smooth transition. 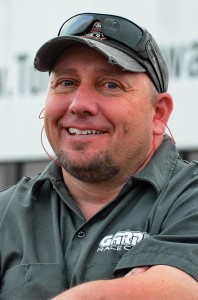 Livingston has already started the process of moving his shop equipment to Jeffers Race Cars, where he’ll also be joined by his brother, Eston, and veteran employee Rodney Sites. Jeffers said his current crew is looking forward to their arrival, too.

“My shop manager, Dave Becker, he’s really excited. All my guys are super excited because it relieves some of the stress and load off of them. The good thing is there’s no conflict in my shop; there are no egos; everybody is on the same team,” Jeffers said.

“Garret and I both have winning records, we both understand what it takes to build a world-class product and we’re both committed to turning out the best in the business, on time, every time. When I think about our combined teams’ resources and ideas, I can’t help but feel really excited about the future.”