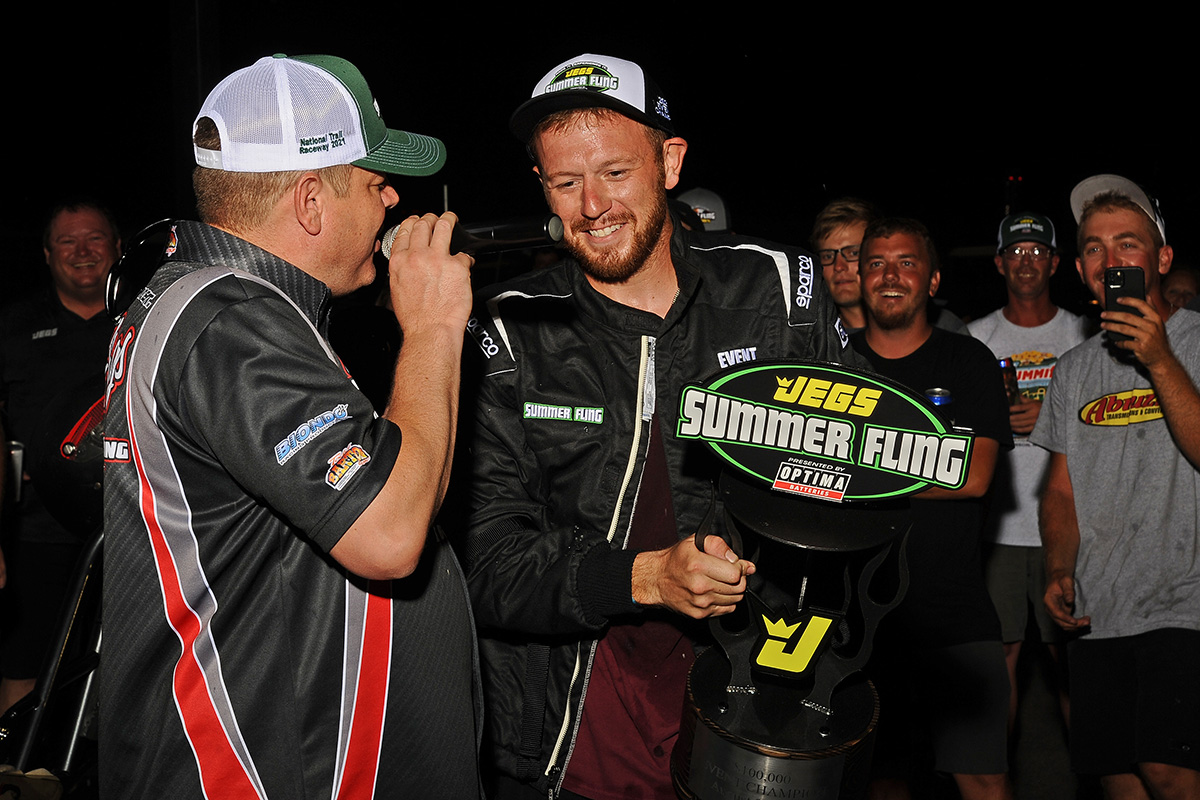 A fast-paced slate of racing was in store for ATI Performance Products 100K Friday at the JEGS Performance Summer Fling presented by Optima Batteries at National Trail Raceway. After an unexpected cell moved through and rained out on-track activities Thursday evening, a revised schedule was released postponing the quarterfinals of the SERVPRO 10K Shootout and semifinals of the American Race Cars 25K Thursday event to Friday morning.

The remaining racers in Thursday’s main event were the match-ups of Joe Barush and Bob Kolibsky Jr., and Pete D’Agnolo versus Tim Kelley. Kolibsky Jr. and Barush staged up first in the semifinals and by way of the lesser double breakout Kolibsky Jr. secured an opportunity to take the American Race Cars 25K big check home. D’Agnolo used a .005 light against Kelly to move his ‘79 Malibu into the second door car versus dragster final of the weekend.

With the 100K event still on deck, it was a “gas and go” situation for the finalists. D’Agnolo ran it down to be “dead-on” eight against the two-thousandths breakout of Kolibsky Jr. to become the second door car winner of the weekend, earning himself $25,000 on his birthday.

The six remaining in the SERVPRO 10K Shootout dwindled down to Josh Luedke, Todd Knight, and Chad Six. Luedke was .011 total to lock Knight out of competition, and Six enjoyed a solo shot at the track. In the final, Six had a .007 advantage on the line and took .006 to be dead on 3.

As the sun sank down behind the trees the Brodix Best Package Runoff was contested after round 5 of the ATI 100K. The 1-run shootout included the best door car package versus the best dragster package where the winner would be awarded aluminum SR20 cylinder heads. Kyle Cultrera qualified with a perfect run on the dragster side to race against Josh Sullivan who put down the best door car package after being .002 total earlier in the week. The redlight of Sullivan awarded Cultrera the SR20 heads.

Serra used his first entry to eliminate Strouse after being .012 and dead-on four. A double breakout decided the pair of Coughlin Jr. and Brannon with Brannon having the lesser of the two quick runs being just one thousandth under. Barush took his single run before Serra returned to knock out Talmadge using a .007 advantage on the tree.

Four drivers returned — Kevin Brannon, Joe Barush, and Serra in two entries. The key was that according to reaction time, Serra had each entry on separate sides of the ladder. If he managed to win both entries, he would face himself in the final. 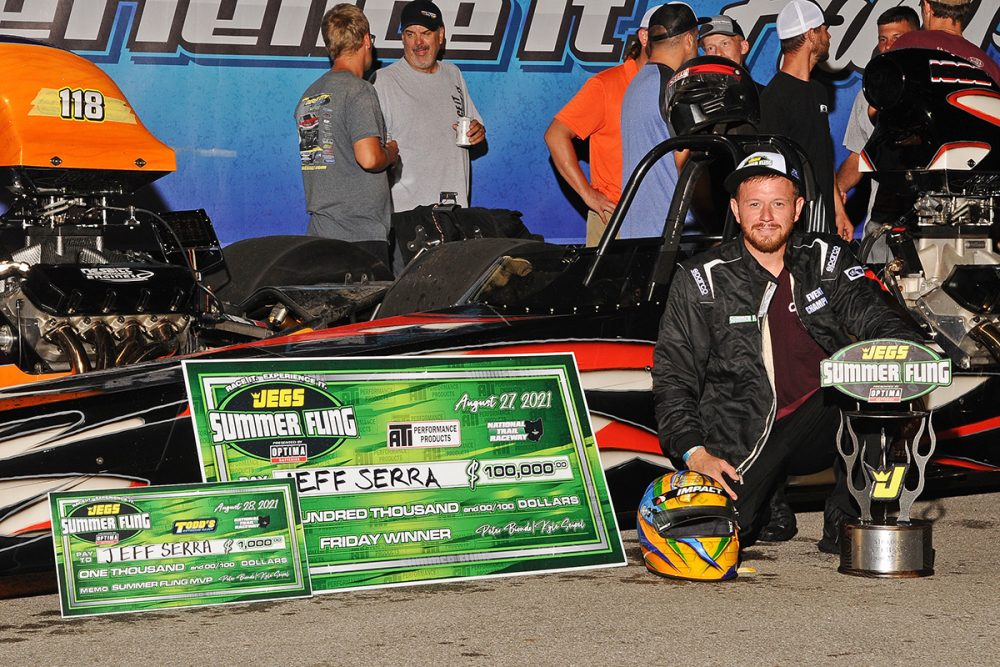 The first pairing was Barush and Serra in his first entry, in which Serra was .003 taking .009 to be .014 above for the win. Then came Brannon in the ‘80 Monza, the last door car remaining. If Serra defeated Brannon, the race was concluded. If Brannon won, however, he would have to race Serra a second time to secure the $100,000 main event check.

Serra continued to execute, being .011 upfront and taking .003 to be dead-on three. A driver carrying two entries to the final round was a Fling first, and the staff appropriately awarded Serra the Todd’s Extreme Paint MVP Award. He was presented with a custom-painted Impact Vapor helmet and $1,000.

FuelTech 25K Saturday will be the last day of competition at the inaugural JEGS Performance Summer Fling presented by Optima Batteries at National Trail Raceway. You can follow all the action live at www.MotorManiaTV.com thanks to Strange Engineering.

For more information, visit www.BracketRaces.com, the Spring Fling Bracket Races Facebook page, or text the word “COLUMBUS” to 74121 for race info and updates.