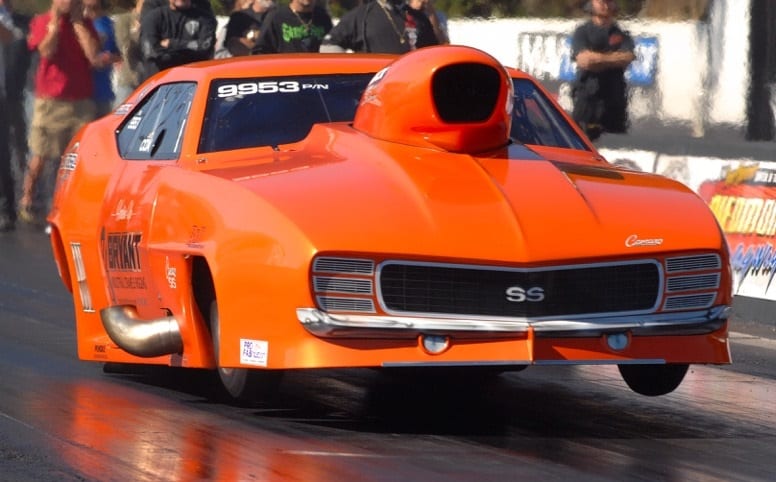 When the management of historic Piedmont Dragway, the ”DoorSlammer Capital of the World” decided to come up with their own version of the “Countdown” for the Lucas Oil Pro Mod Shootout, October 17, you had to know that the 2015 version of the famous PowerJam would provide a flurry of great cars and drivers trying to make the coveted eight spots in eliminations that have always provided their own type of fireworks for the July 4th holiday. Fans, track management, and the media in attendance were not disappointed.

With a spotty weather pattern on Friday before the Saturday event, some cars did get to dial into the track that makes grown men go grey-headed on a regular basis. When first round was called to the line at about 3:00 on Saturday, there were 13 cars trying to get down a track that now was hotter and more loose that Friday. So it was no surprise that Big Dog and Renegade regular, Jay Cox had taken the number one spot at a 3.839 et at over 198 mph in the 660 feet. Second was points leader Travis Harvey at a 3.861 with rookie Ty Tutterow a great third in his GALOT sponsored Camaro at 3.887. Rounding out the top 4 spots was Todd Howard in Jerry Williams’ Mustang at 3.906. The five through eight positions went to the June winner, veteran Tommy Mauney at 3.924, with last year’s Lucas Oil Shootout winner, Chris Rini, in at 3.954. Seventh was Chris Cline, at a 3.957 and EOPM regular Randy Weatherford closing out an all-three-second field at 3.961. Not making the cut were the very capable cars and drivers of David Campbell, Brian Teachman, Danny Perry, Jim Teachman, and Zach Hauser, currently third in points.

In case you haven’t been following along, the top 4 in points in both Big Dog and EOPM are automatically qualified for the Lucas Oil Pro Mod Shootout, this year presented by E3 Sparkplugs. That meant that all the qualified drivers were “up on the wheel” in first round with low ET going to Cox at 3.81 over Weatherford’s 3.94. Other winners were Chris Rini over a broken Tutterow, Tommy Mauney over a slowing Todd Howard, and Travis Harvey over Chris Cline, who fouled.

The semis had both Cox and Harvey in the 3.70’s over Mauney and Rini. That set up one of the closest finals in Big Dog history with Jay Cox going 3.774, with an .029 light to defeat Travis Harvey’s ever-so-close 3.792 with an equally impressive .026 light, earning Mr. Cox his first plaster bull dog, the highly coveted Big Dog.

Points were awarded in both Big Dog and EOPM and have been updated. In Big Dog, Travis Harvey still hangs on to the #1 spot. The second through sixth spots are all up for grabs as Chris Cline, Tommy Mauney, Chris Rini are in a very tight group. The same is true for EOPM with Jay Cox comfortably in first, with Chris Rini, Travis Harvey, Ty Tutterow, Jason Harris, Randy Weatherford, and Todd Howard in a mad scramble for the top 4 spots. With the upcoming combo event in August, this should get really interesting. 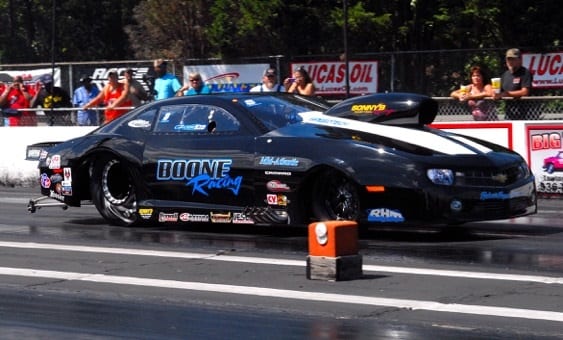 Renegade had Jamie Chappell going a 4.137 for low qualifier. Close behind were regulars Tim Lawerence at 4.154, Brett Nesbitt at 4.155, and Larry Pearce at 4.212. The five through eight spots went to Brian Schrader, Charles Richards, Jr, and newcomers Tim Siler and Cam Clark. Remember the last two as they fought it out for the final with Siler winning his first Renegade eliminator, presented by Super Clean, over Cam Clark’s redlight.

Other winners for the July 4th event included Robert Richardson winning in 6.00 Raiders, Freddie Yeatts in Outlaw Doorslammers and Ken Myrick picking up the win in 7.49 Real Street. Winning the junior dragster eliminator, run with EOPM rules, was Sierre Eure over Mia Schultz, both EOPM regulars.

The format for August will be the same, with Big Dog and EOPM combining events once again. So look for the competition to be even more fierce with even more quality Pro Mods on the property. “Doc” and “Monza” from the hit Discovery Channel show “Street Outlaws” will also be on hand.