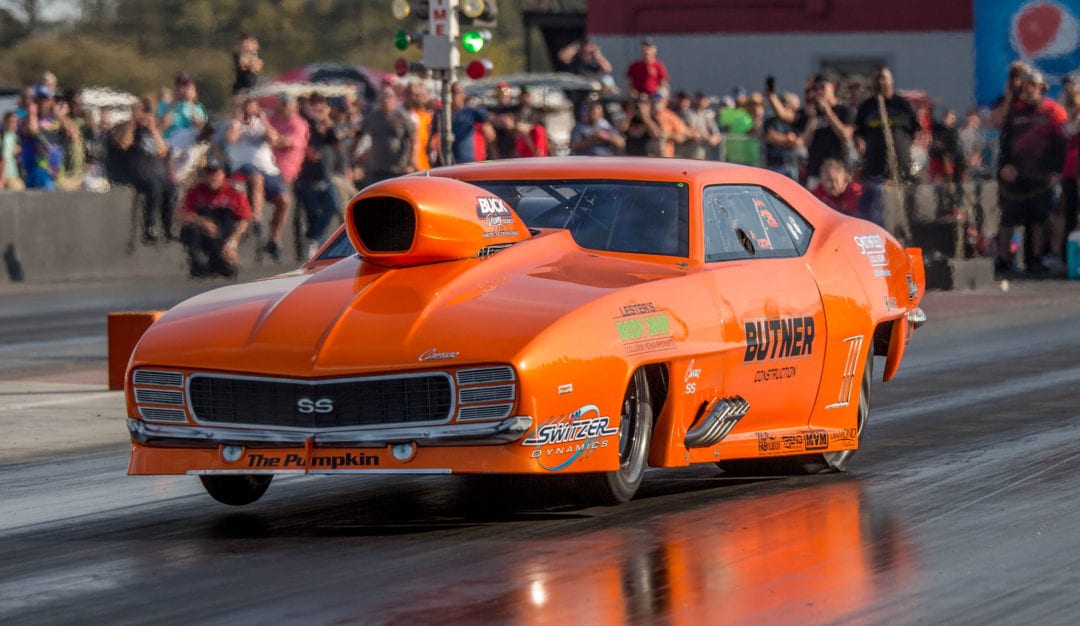 Between the PDRA and the Carolina Xtreme Pro Mod Series, Jay Cox already has a pair of No. 1 qualifiers this season.

The only thing that’s missing is a win and that’s something the nitrous standout hopes to change this weekend in his Butner Construction ’69 Camaro. Unsatisfied with the way he’s driven during eliminations, Cox is determined to change that 2019 narrative at Saturday’s Rage Fuel Systems CXPM Nationals at Darlington Dragway, the second race of the Carolina Xtreme Pro Mod Series season.

“I probably have the best car I’ve ever had, but I’ve not raced that well,” said Cox, who qualified No. 1 at the Carolina Xtreme Pro Mod opener in Darlington. “I’ve had a fast, consistent car. It’s by far the fastest and by far the most consistent car I’ve had, so anytime I show up I have confidence.

“As a driver, I’ve done a bad job this year. I just have to start racing better and hopefully I can get into a rhythm this weekend.”

Cox, who made the quickest run in PDRA Pro Nitrous history earlier this year, is one of the marquee Pro Mod names on the entry list for Saturday’s race. The likes of Charles Carpenter, Tommy Mauney, and Chris Rini are slated to appear, and series co-founder Nathan Vanbeek said NHRA Pro Mod standout Jeremy Ray could make an appearance as well.

The series could get another 16-car field for Saturday’s race, an impressive feat after Vanbeek and Tony Wilson didn’t run the series in 2018. They came into 2019 hoping for 10-12 cars at each race, but the first two have provided a significant uptick.

Even with weather forcing a cancellation of one race and a two-month delay between the first and second race, Vanbeek likes how the series continues to build momentum

“Seeing a good forecast and a good car count, I’m definitely looking forward to that,” Vanbeek said. “We’re already exceeding expectation. We always look forward to going there. They give us a great track and facility.”

The 2019 opener also took place at Darlington, but Saturday’s race will be run in conjunction with the IHRA Summit Sportsman Spectacular. Cox and his Pro Mod competitors plan to steal the show, even with the expected hot track conditions.

ATI will provide free testing on Friday, which has been another huge draw for racers. They test on Friday, qualify on Saturday and keep up a quick pace to complete eliminations the same day.

“I really like that it’s a one-day deal. You show up, race and then you go home,” Cox said. “It’s a good deal all around for everybody. It doesn’t cost me anything to come in the gate. I pay $200-300 in diesel and test for free. It’s kind of a no-brainer.

“Tony and Nathan, they do a fine job. They don’t drag it out. Every 45-50 minutes you’re going, and it’s a good group of fast cars. I’m supporting it because the more places a racer has to race, the better off you are. It helps you stay sharp and stay on your game.”

Doug Winters won the opening race against Rickie Smith, which means there will be a different winner this time around in Darlington.

The free testing has gone over extremely well on Friday, while Saturday qualifying is expected to start at noon on Saturday with eliminations to follow. The series provided a thrilling show the first time in Darlington and Vanbeek expects more of the same on Saturday.

“One thing about Darlington, they love their Pro Mod, so it should be good,” Vanbeek said.