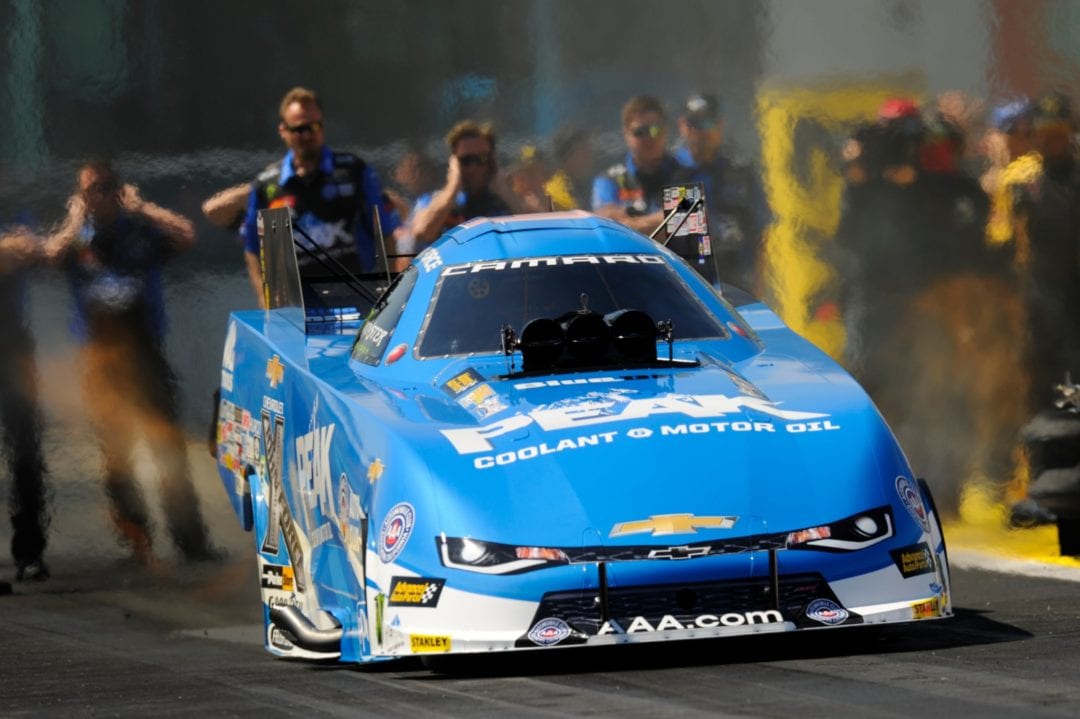 Force, a sixteen-time world champion, ran a track elapsed time record of 3.832 seconds at 333.25 mph in his PEAK Chevy Camaro in the second qualifying session.

“It feels good. The old hot trod went down the race track well,” Force said. “We made a lot of changes recently. Robert Hight and I decided to switch teams. It all just made sense. My heart felt good and I knew it was good beacuse I started hearing the music and when you lose the music you’re dead and you don’t even know it. You gotta find the music. That’s the hardest thing to do and that makes everything right.”

Force’s teammate Robert Hight sits second with a 3.844 at 331.61 in his Auto Club Chevy Camaro, Matt Hagan, already a two-time winner this season, ran a 3.854 at 328.70 in his Mopar Express Lane Dodge Charger R/T for third and Force’s daughter, Courtney, is fourth with a 3.860 at a track speed record of 333.25 in the Advance Auto Parts Chevy Camaro.

Schumacher, a nine-time Top Fuel world champion, leads qualifying after his track elapsed time record run of 3.682 at 328.22 in the U.S. Army dragster during the second session. 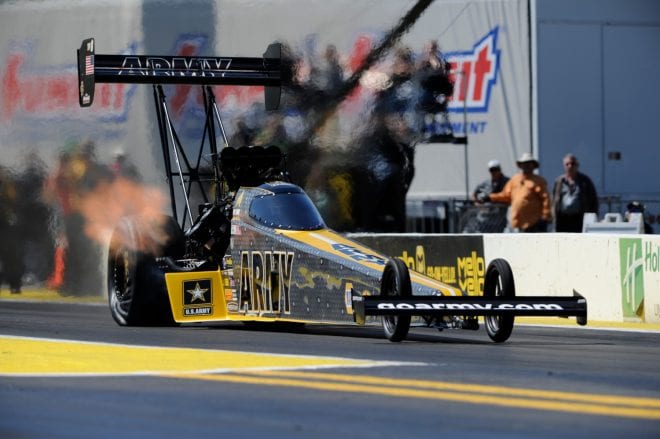 “I think that was a good quality run,” Schumacher said. “It’ll stay in the top couple if nothing else. I’m proud of my team they did a great job to do what it took to get down the race track and at least for Friday night hold that No. 1 spot.”

Doug Kalitta and the Mac Tools dragster are second with a 3.698 run at 328.78 and defending and three-time world champion Antron Brown is third with a 3.716 at 325.22 in his Matco Tools dragster. Defending event winner, Brittany Force and the Monster Energy dragster sit in fourth.

Defending world champion Jason Line holds the Pro Stock top spot after running a 6.476 at 213.87 in his Summit Racing Equipment Chevy Camaro in the second session.

“The class as a whole has picked up a fair amount of power over the off-season,” Line said. “We’re 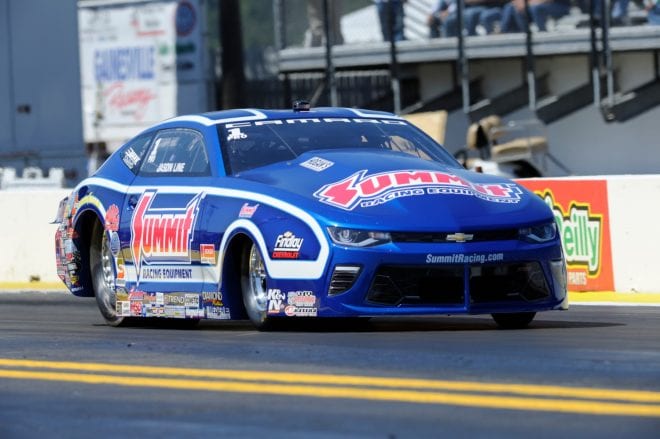 certainly much faster than we were last year at this time. It felt like we could go that fast, maybe a little bit faster. Nonetheless, saying it is one thing but doing it is another so we did it. It was a good day.”

Line bumped teammate Bo Butner who ran a 6.477 at 213.60 in his Jim Butner’s Auto Chevy Camaro and now sits in second. Two-time world champ Erica Enders is in third with a 6.490 at 214.01 in her Elite Motorsports Chevy Camaro.

In Pro Stock Motorcycle, three-time world champion Eddie Krawiec currently sits in the No. 1 qualifier position with a 6.791 pass at 198.17 on his Screamin’ Eagle Vance & Hines Harley-Davidson. 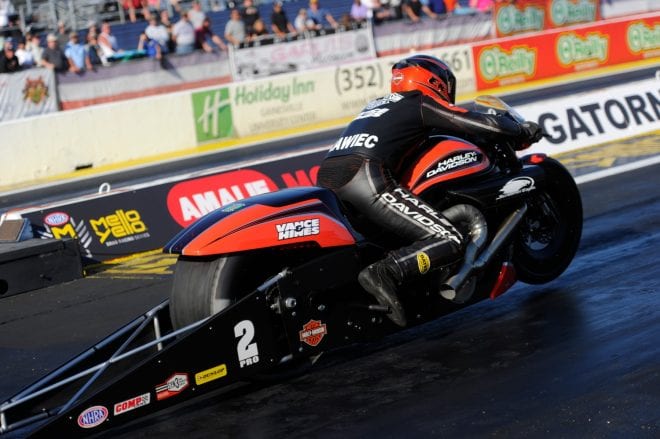 “To come off the trailer and to set the pace like that it kind of sets your trend for the weekend,” Krawiec said. “We knew we had fast Harleys we just had to continue to work on the setup. Our main focus was come here, unload off the truck, get a solid run, get qualified, get in the show and then start working.”

Hector Arana Sr. sits in second position with a 6.813 pass at 197.02 on his Lucas Oil Buell and LE Tonglet on his Nitro Fish Racing Suzuki is in third. Defending world champion Jerry Savoie sits fifth.

Qualifying at the 48th annual Amalie Motor Oil NHRA Gatornationals continues at noon and 2:30 p.m. on Saturday at Gainesville Raceway.