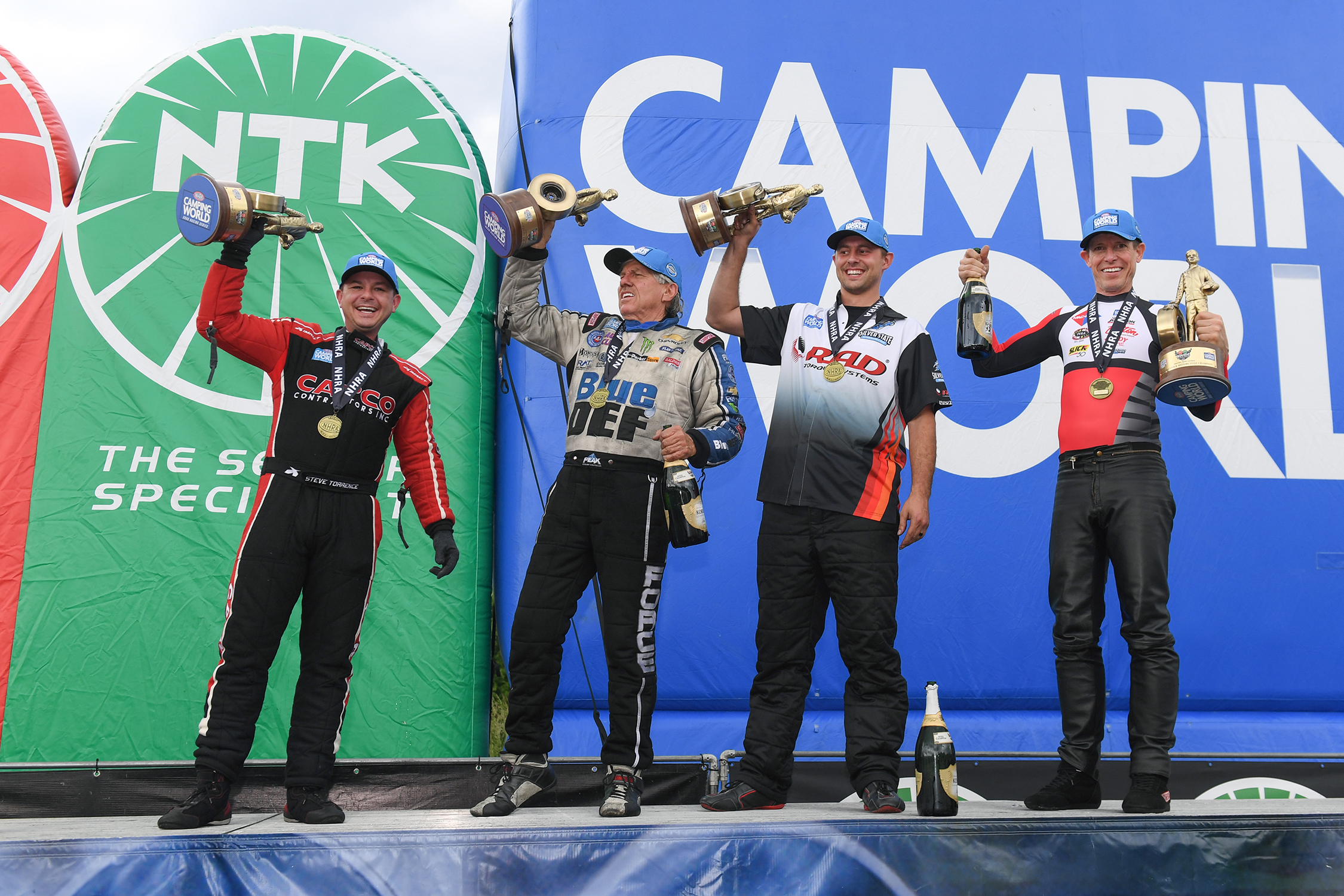 Force wrapped up a spectacular weekend at zMAX Dragway with a run of 3.916-seconds at 328.78 mph in his 11,000-horsepower PEAK/BlueDEF Platinum Chevrolet Camaro SS in the final round. He held off a standout final quad that also featured J.R. Todd, Cruz Pedregon and Alexis DeJoria, handing Force his first victory since winning the U.S. Nationals at Indy in 2019. The legendary Force, who was also the No. 1 qualifier, went as quick as 3.897 at 330.31 on Sunday, crediting a strong team and his love of racing at zMAX Dragway to earn his second four-wide win at Charlotte. 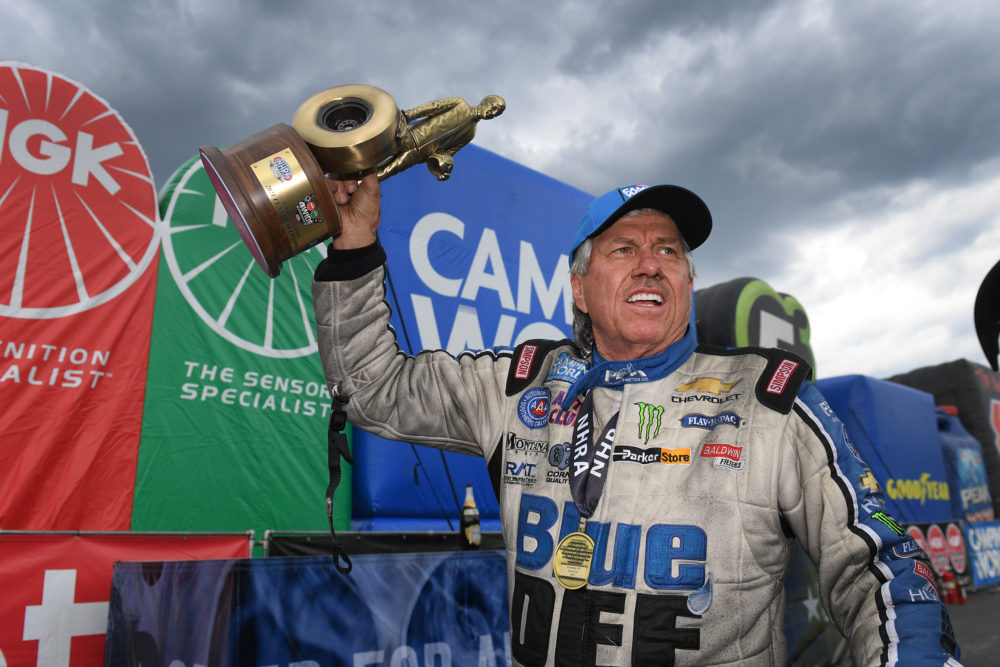 “Timing is everything,” Force said. “I won the inaugural (four-wide race) here (in 2010) and this makes me so proud. Don’t take the job you love for granted. I wanted to win for (track owner) Bruton (Smith), (crew chief) Daniel (Hood), but these kids are tough out here. Some days, things go right and our car was ready and prepared, and I halfway did my job. I’m excited and I get to send this (Wally trophy) to Bruton, a guy I really love.”

Gainesville winner Todd advanced to his second final round of the year and 37th overall, going 3.944 at 327.82. Pedregon appeared in his first final of the season, while DeJoria was also making her first appearance in the finals. 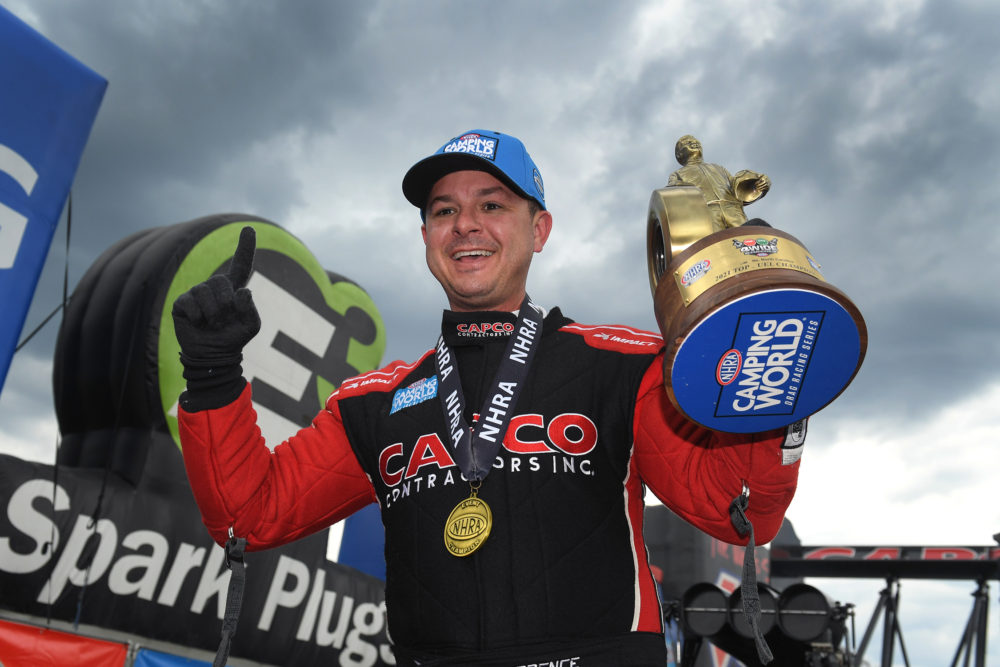 Torrence continued his four-wide dominance, winning for the sixth time in the last seven Top Fuel four-wide events, furthering the points lead for the reigning three-time world champ. Torrence went 3.716 at 329.10 in his 11,000-horsepower Capco Contractors dragster in the final round, knocking off a loaded final-round quad that also included No. 1 qualifier Brittany Force, Atlanta winner Antron Brown and Gainesville winner Josh Hart. Torrence won for the second time this season and earned his 42nd career victory, also picking up his fourth straight four-wide win at zMAX Dragway.

“At first, admittedly, I was not a fan of the four-wide but (track owner) Bruton Smith and Marcus, thank you guys, I love it,” said Torrence. “I mean, we do really well I don’t know why but I like to keep doing it. It’s the only thing that I’ve got a winning record, and so I’m proud of that. It makes us as a driver step up more, I think that it takes you out of your body, your wheelhouse of thinking makes you concentrate and focus a lot more.”

B. Force advanced to her first final this year and 24th overall, finishing as the runner-up with a run of 3.723 at 333.16 as she tried to join her father in the winner’s circle for the first time. It’s the third straight final for Brown, and second in just three races for rookie Hart. 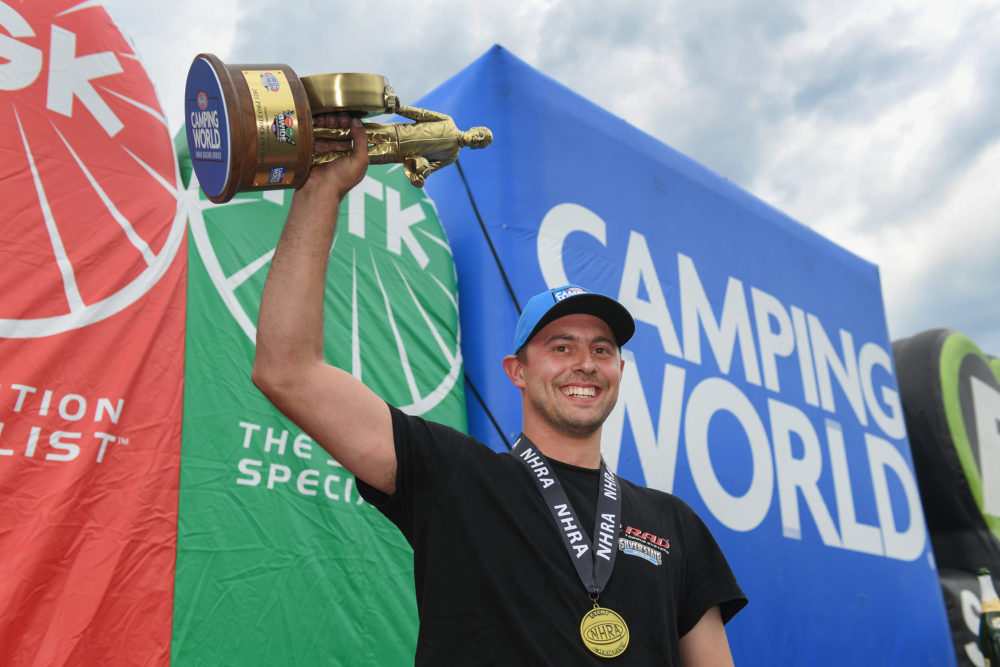 The Pro Stock final quad featured four young drivers going for their first career victory, and it was Glenn who came out on top against Mason McGaha, Troy Coughlin Jr. and Fernando Cuadra Jr. Glenn went 6.540 at 210.80 in his RAD Torque Systems Chevrolet Camaro. In his first final round appearance in just his fourth career start, Glenn gave KB Racing its fourth win in as many races to open the 2021 season.

“To be honest, I don’t even think it’s hit me yet,” Glenn said. “I’m just trying to enjoy everything I can. I’ve never experienced it on this side. It’s super emotional. This is a whole new perspective for me and these cars are so much fun, but they’re hard to drive. The results just came a little sooner than we were expecting.”

Mason McGaha finished as the runner-up, advancing to the final quad at both four-wide races this year. Troy Coughlin advanced to his third career final round, while Cuadra was making his first final-round appearance. 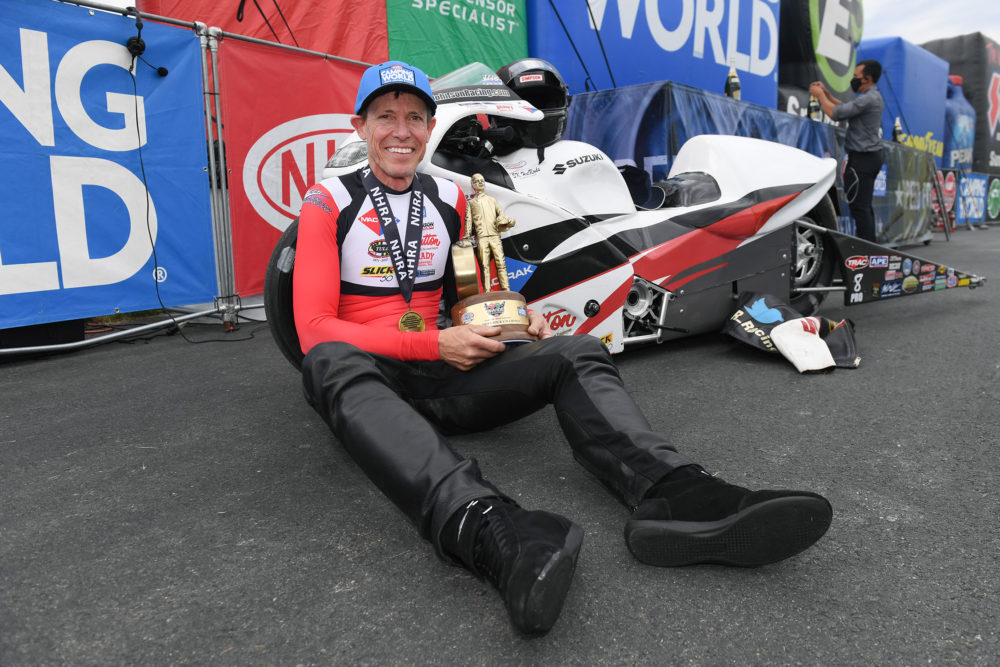 It was a long time coming for Pro Stock Motorcycle veteran Steve Johnson, who picked up his first victory in more than seven years, going a track-record 6.729 at 198.03 in the final round on his Mac Rak Suzuki. It also gave Johnson the third-quickest pass in the history of the class and the quickest ever run in class history for a Suzuki. To win for the first time since Gainesville in 2014 and the seventh time in his career, Johnson had to beat defending world champ Matt Smith, Karen Stoffer and Joey Gladstone in the final round.

“When you have a career path and you reach a goal, it can be euphoric,” Johnson said. “We are committed to this sport and I’m so excited about the emotion of our sport. I feel like our sport is really doing well. This trophy is so cool and this is the most special (win).”

Points leader Smith finished as runner-up in advancing to his 60th final round in his career and third this season. It was just the second career final-round appearance for Gladstone and the first for Stoffer since 2019.