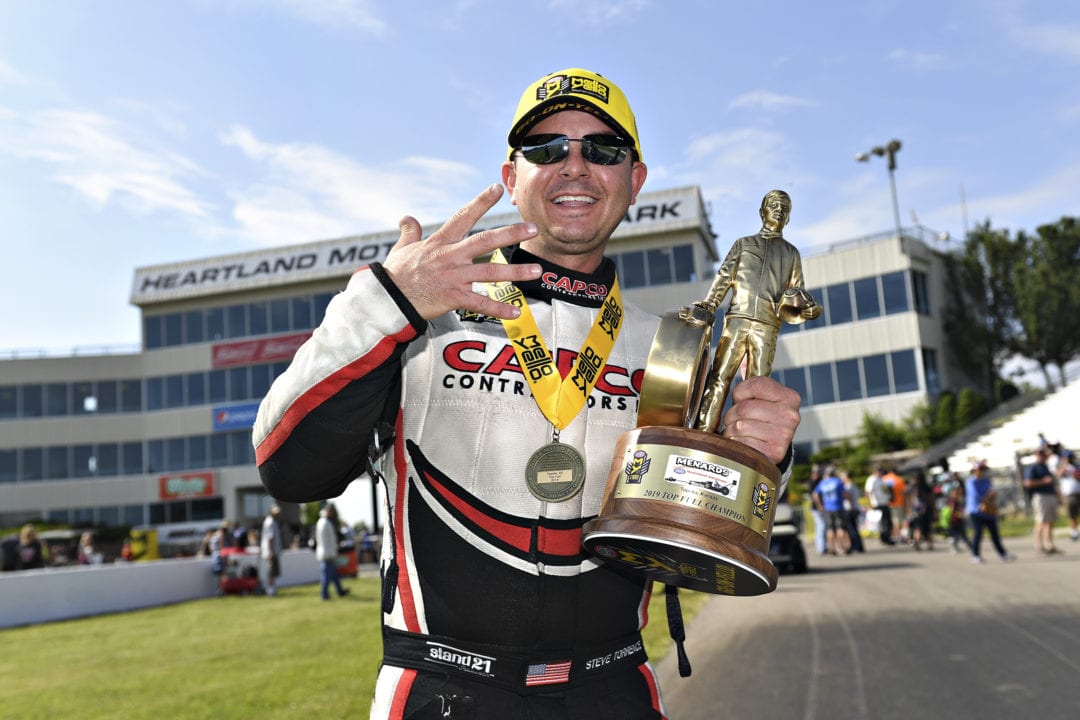 In one of the most dominating team performances in NHRA Top Fuel drag racing history, Steve Torrence beat his dad Billy in a final round duel between the No. 1 and No. 2 qualifiers Sunday and won the 31st annual Menard’s Heartland Nationals at Heartland Motorsports Park.

It was the fifth straight win for the reigning Mello Yello Champion who now has celebrated victories at 11 of the last 16 pro tour events dating back to the fall of 2018 when he swept the six races comprising the NHRA’s Countdown to the Championship.

It was just the second father-son Top Fuel final in NHRA history and it could not have been more fiercely contested before the younger Torrence got his white-on-black Capco Contractors dragster to the finish line .008 of a second ahead of his dad’s black-on-white entry.

“It’s something that probably will stand out (in my mind) forever,” Torrence said of the historic final. “I raced with my dad growing up. I watched him race and that’s what made me want to race. But to be able to compete at this level, to go No. 1 and No. 2 in almost every qualifying session and then carry that momentum through race day and climb through the ladder, is really special. Aside from my first final ever and first race win, this is right up there at the top if not above it.”

“I can’t believe how well he drove today,” Torrence said of his dad, who raced and won in the Super Comp class before getting an opportunity to drive a fuel dragster.
“It’s expected that I do well, but that guy gets in the car just every now and then and comes out and still kicks butt

“We’re both competitive,” he said. “He wanted to win; I wanted to win. He was there but my guys saved me. I just had a better race car. I went a little quicker. He left on me. That guy was trying to end the streak.”

The only other time a father and son lined up opposite one another in a Top Fuel final was on March 20, 1994 in the NHRA Gatornationals at Gainesville, Fla., where Conrad Kalitta beat son Scott to the finish line in a season in which the younger Kalitta went on to win the first of his two series titles.

With Richard Hogan and Bobby Lagana Jr. making the tuning decisions, the Capco dragsters performed flawlessly from qualifying through eliminations.

Steve Torrence earned the 21st No. 1 start of his pro career with a solid 3.760 second effort on Friday but it was just a couple ticks quicker than his dad’s time (3.765) in the twin car.

Nevertheless, while he failed to end his victory drought against his son (he’s now 0-6), the founder of Capco Contractors, a Texas-based oil and gas pipeline construction and maintenance company, did manage to fight his way back into the Top 10 in points despite missing four of the 10 races contested thus far.

For the 36-year-old champion, it was his 32nd tour victory, all since he decided to field his own team in 2012. When qualifying begins Friday in the 19th annual NHRA Thunder Valley Nationals at Bristol, Tenn., he will lead second place Doug Kalitta by an almost unfathomable 321 points, more than 15 rounds of racing.