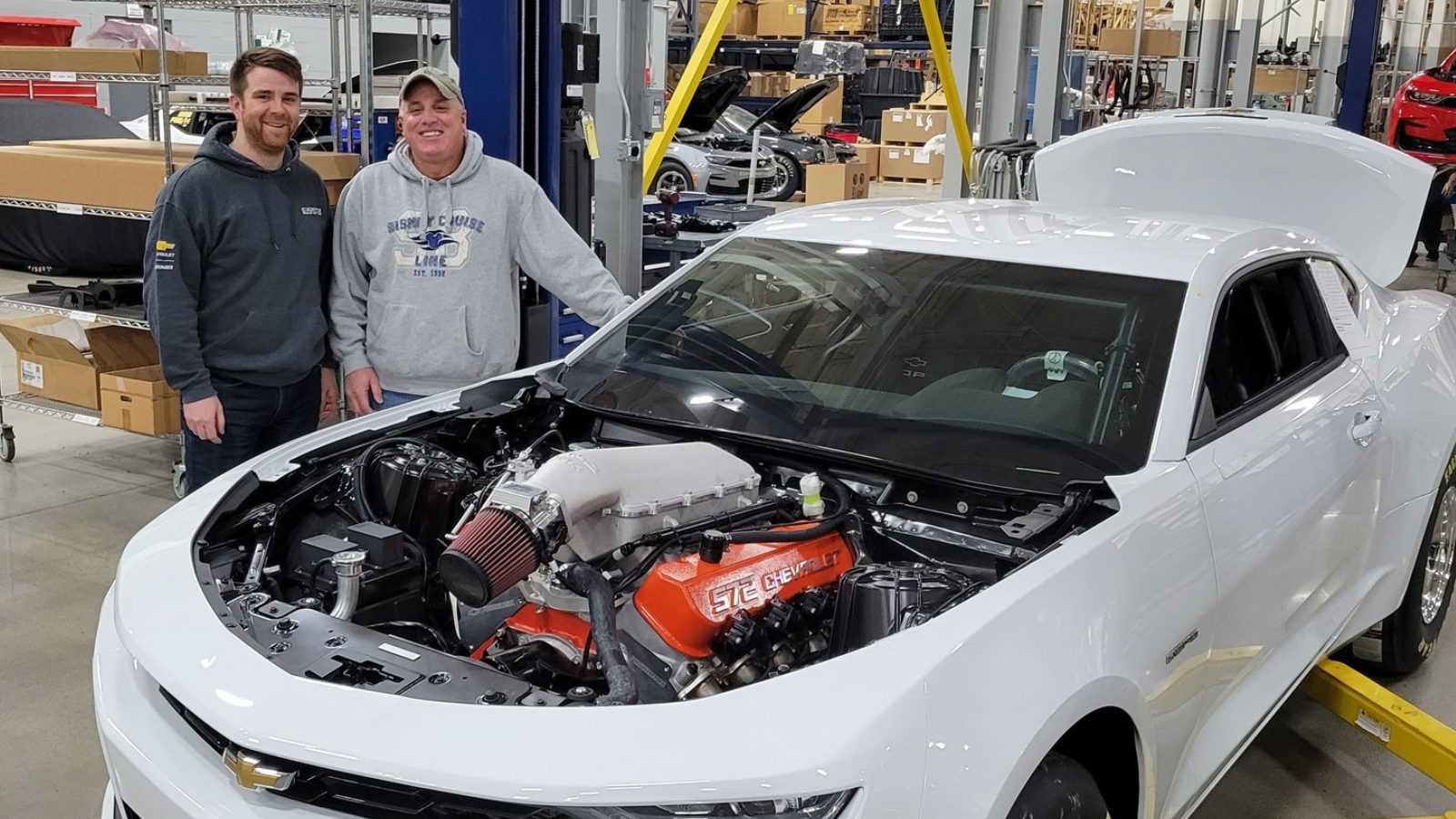 Daren Poole-Adams has a nostalgic heart and a mind intensely focused on the future of drag racing. Standing beside a pair of crisp white COPO Camaros in the pit area at Lucas Oil Indianapolis Raceway Park during the Dodge Power Brokers NHRA U.S. Nationals, his thoughtful investment was evident.

“I do live a little bit in the nostalgic past of Stock and Super Stock, and I think it’s still a great product,” says the Shelby, North Carolina, resident, as he gestured toward the closest car, a Camaro Rolling Chassis (CRC) from the COPO program that bears serial No. 3 of five built in 2016.

The car was outfitted this year with a 2022 body kit and converted to port injection, and it’s driven in NHRA competition by Steve Foley, a skilled bracket racer-turned-Stock Eliminator competitor. Once purchased by Poole-Adams, the car was initially utilized by Holley EFI engineers to create their first direct-injection systems. Poole-Adams is still involved with such entities such as GM, Holley, Goodyear, and more to test new technology as needed.

“I very much like testing things for anybody that will let us,” says Poole-Adams, who also enjoys hand-selecting drivers to pilot his race cars. Stock Eliminator standouts Brenda Grubbs, A.J. Currie, and Emily Stott-Volkman have all wheeled cars from his stable. Most recently, Foley, Jeff Warren, and Robbie Butler have raced with Poole-Adams.

“This car is my favorite,” says Poole-Adams, nodding to the No. 3 COPO. “This is the wheelie car, and it’s just so fun. We’ve worked really hard on it, and it’s very, very competitive.”

Putting Foley in a car was almost destiny as Warren – Foley’s father-in-law – has been a friend since Poole-Adams raced LT1 cars in the 1990s. 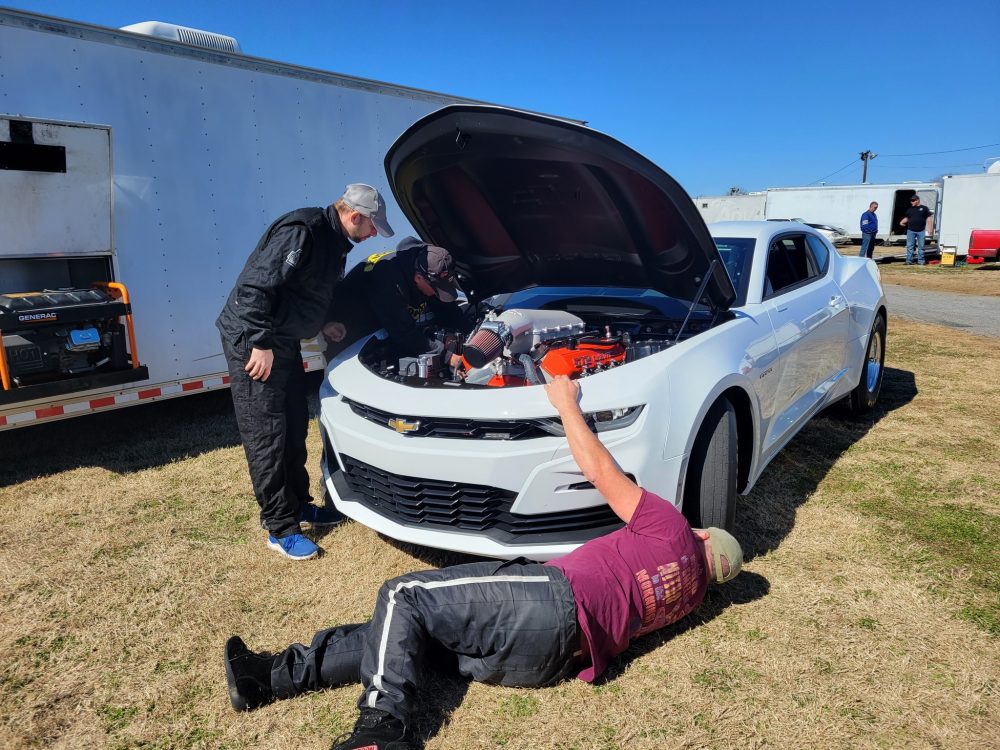 “Jeff Warren was the first guy I ever reached out to for a short block,” he says. “I always did my own stuff, but I saw Jeff had a lot of fast LT1 cars back then. We’d hang out at the racetrack, and eventually, Jeff ended up wanting to transition from LT1 to maybe something new. I let him have my 2014 COPO, and we did a joint venture, then we went to 396, and that’s where he is now.”

The Poole-Adams racing family tree has another branch that brings in Mark Beaver, who owns the red LT1 1998 Camaro that Foley also races in Stock Eliminator.

“I bought that car new, drove it to work three years, paid if off, then built a Stocker out of it. It won Best Engineered in IHRA,” says Poole-Adams, who eventually sold the car to Beaver. “It was crazy fast in IHRA days, and Mark Beaver has done me proud with it over here. It’s kind of funny; Foley ends up in that car that I built, and he beat me with it at the last divisional in Atlanta. It’s a great car.”

Aside from his commitment to the future of Stock and Super Stock, Poole-Adams is invested in drag racing as a whole as a founding member of Performance Racing Industry (PRI). 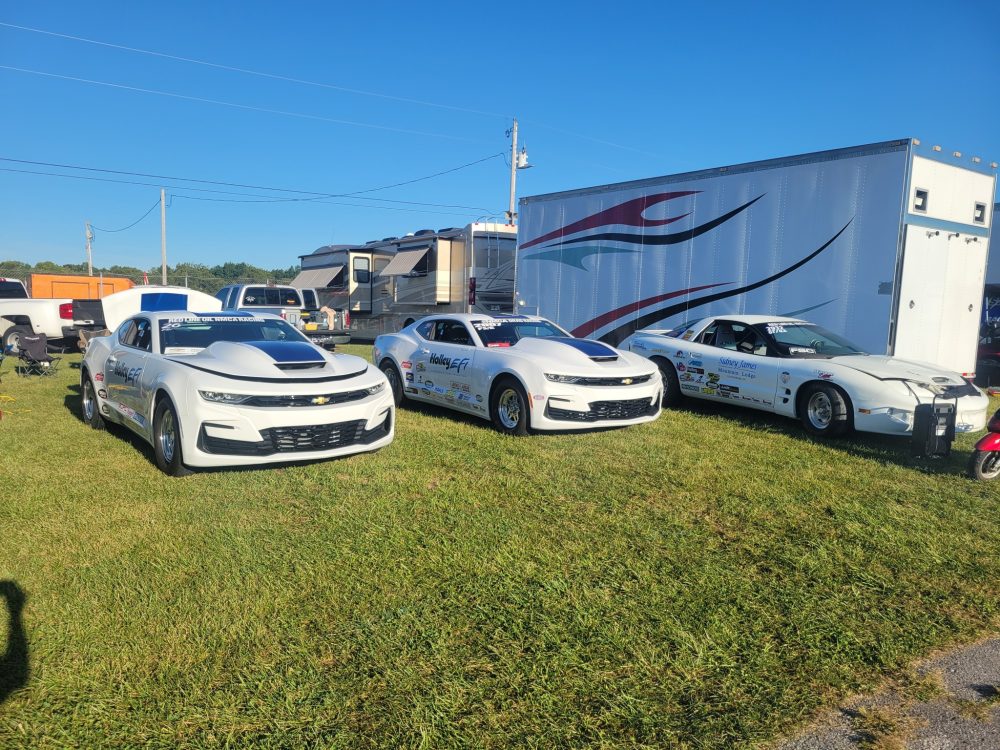 “None of this is about me,” he insists. “The reason I’m invested is because what we do is under attack, and we have to keep this thing alive for generations. We have to keep the kids interested and bring drag racing to kids who may not experience it otherwise.”

Poole-Adams and wife Veronica sponsor Jr. drag racers, including Illinois-based Jeggie and Claire Weets. They have also pledged to sponsor Foley and wife Brooke’s son, Langdon (upon whom he has bestowed the nickname “Lugnut”), in his future Jr. drag racing endeavors.

“I just want to do the best that I can and leave a mark,” he says. “We live our lives, we work hard, and we always have steady goals. But if I die tomorrow, I’ve lived a great life.”