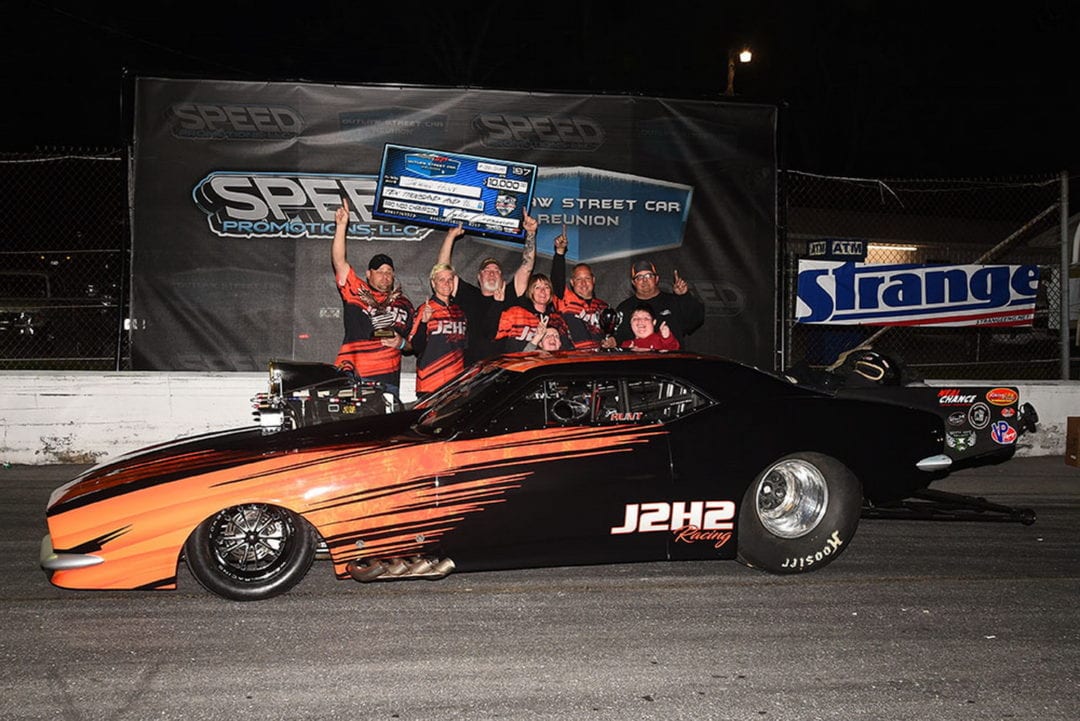 “I’m proud to say we had tremendous representation for the Mid-West Pro Mod Series in our first trip to Bowling Green,” said Keith Haney, owner and promoter of the all-eighth-mile, Tulsa-based drag racing organization. “We had 33 cars entered in Pro Mod, 18 in Radial vs. the World and 40 in X275. I couldn’t be any happier with the turnout and want to thank each and every team for supporting our sponsors at such a great event.”

Originally scheduled to run April 20-22, a long-range forecast for rain prompted OSCR organizer Tyler Crossnoe to step up the schedule and move eliminations from Sunday to Saturday. It proved to be the right choice, but made for a hectic weekend, he explained.

“I’m so glad we made that call on Tuesday and let everyone know about the new schedule because it did rain hard on Sunday and we never would have got this race in if we hadn’t,” Crossnoe said. “Plus, we had more oildowns and wrecks on Friday than we’d had in all four previous events combined, so between those and the compressed schedule it put a lot of stress on me and my guys all weekend.

“But it all worked out in the end and the racers really seemed to enjoy the Friday-Saturday event because they all could drive home on Sunday. Going forward, if we continue with the event, we’ll stick with this new format and wrap it up on Saturday evening.”

Hunt, who returned to racing just a month ago at the MWPMS season opener in Texas, brought his supercharged ’67 Camaro down from St. Louis and qualified 13th with a 3.83-seconds pass, directly ahead of Haney and his nitrous-assisted ’16 Camaro. Leading the 16-car Pro Mod field into race day was Arkansas racer Eddie Rogers with a new MWPMS record of 3.70 seconds at 201.16 mph, followed by Jonas Aleshire at 3.73 and 204.82, and Wayne Roberts with a 3.74 run at 198.03 mph.

Once eliminations began, Hunt opened with another 3.83 to hold off a hard-charging Steve Summers, then went 3.88 in the quarter-finals while 5th-place starter Mike Recchia lost control of his ’69 Camaro and sideswiped the right guardwall. Fortunately, Recchia was uninjured while Hunt went on to post 3.83 yet again in the semis while outrunning Stephan Stringer.

Meanwhile, on the opposite side of the ladder Aleshire remained in the 3.70s all day with his blown ’06 Corvette as he eliminated Tony Williams, Todd Martin, winner of the MWPMS Texas race, and Ron Muenks to reach Hunt in the final. Once there, however, Aleshire experienced a starting-line issue that led to a red-light start, while Hunt streaked to the win with his best pass of the weekend at 3.80 seconds and 198.47 mph. 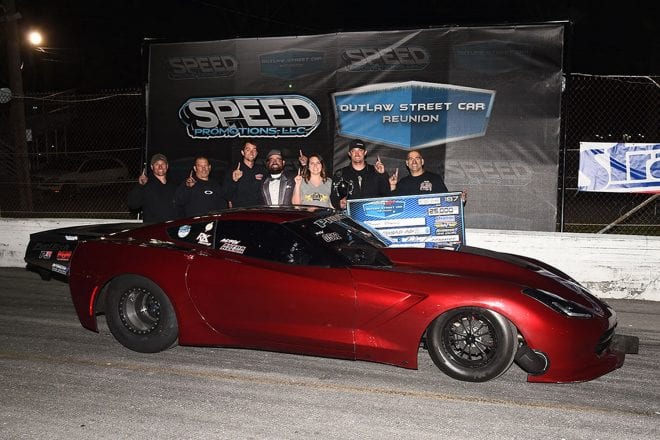 Driving a twin-turboed 2014 Corvette for Andrew Alepa, Pharris went on to defeat Keith Rhea in round one, made a bye run in round two thanks to the 18-car, all-run field, then took down Jody Voyles and won with a holeshot over Micke in the semis. That Micke was even there was a testament to his team and the help of many others after he grenaded his twin-turbocharged engine in round two of racing. Only a heroic thrash got his Jason Carter-owned ’78 Malibu back in action for a third-round bye in which Micke merely broke the starting beam and idled down track to make things official.

Waiting for Pharris in the final was the nitrous-fed ’69 Camaro of 4th-place qualifier Jeff Naiser, who bested Ruben Tetsoshvili in the opener, followed by David Adkins and DeWayne Mills, who lost to a Naiser holeshot by a mere one-thousandth of a second. Again thanks to the unconventional starting-field number, Naiser then enjoyed a bye from the semis to the final, where Pharris led stripe-to-stripe with a 3.73 pass at 214.35 mph over the 3.74 at 196.82 combo put together by Naiser.

By the time the event was over, Pharris actually visited Beech Bend’s victory lane twice, as he also scored the win in Limited Drag Radial, beating Shane Stack in the final round to become the first double-up winner in OSCR history.

In X275, Ron Rhodes arrived from Townsend, DE, and laid down a 4.38-seconds pass at 159.97 mph in his ’67 Camaro to sit on the pole, leading a 32-car field into eliminations. However, it was 4th-place starter White and his ’89 Mustang that survived five rounds of racing to take the MWPMS win home to Memphis.

White caught a break in round one when Shannon Renfro went red by a thousandth off the tree, but after 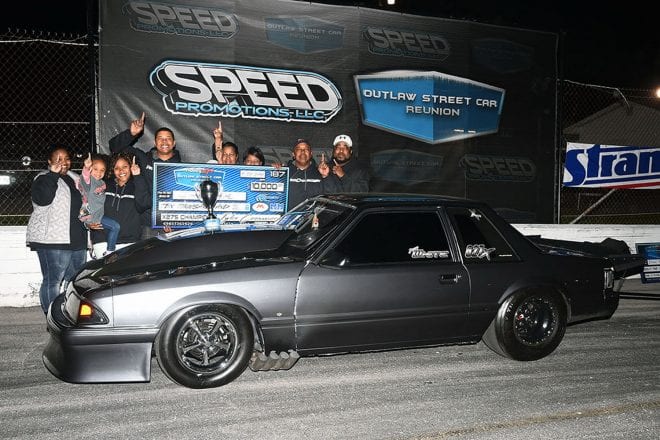 that White settled in to beat Sean Lyon, Alan Felts and Eric Moore to reach Shane Fisher in the final. Fisher was a no-show, however, after damaging his engine in his semi-final win over Rich Bruder, who in the previous round set a new X275 elapsed-time record of 4.29 seconds, becoming the first driver in the class to run a sub-4.30-seconds lap.

“The racers of the Mid-West Pro Mod Association put on one helluva’ show and it was a real honor for us to be part of the Outlaw Street Car Reunion,” Haney declared. “But it’s also important to recognize all of our great sponsors and marketing partners who put their faith—and their money—on us to make things happen. They make all of this stuff possible; they allow us to do the things we love while providing the tracks we race at with $10,000 at each event and paying our racers a decent purse that makes them want to keep coming back.”