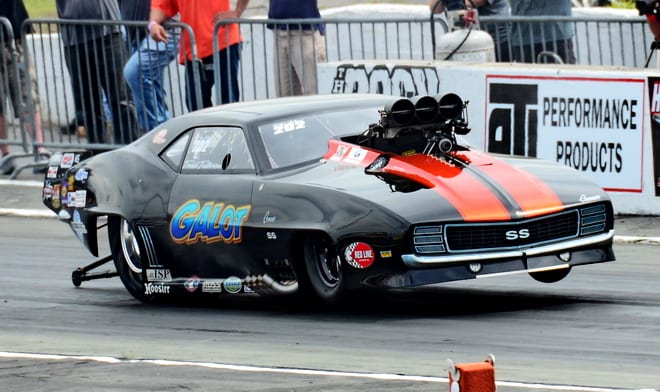 Tutterow, from Yadkinville, NC, had neither the quickest or fastest car all weekend, qualifying his GALOT Racing ’69 Camaro 12th in NAS Racing Pro Extreme and posting the slowest pass among the winners through each of four rounds of racing. Polesitter Jason Scruggs led the 16-car field with a 3.54 at 217.42 mph, compared to Tutterow’s 3.63 at 209.04-mph qualifying effort. 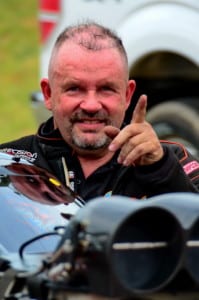 Regardless, it never held him back as “King Tut” denied Dubai’s Mustafa Buhumaid his second-straight PDRA victory in the Pro Extreme final.

“We kind of got lucky,” Tutterow acknowledged. “We struggled all weekend here with this car but we made it to the final and I’ve always said if you can make it to the final you’ve got a chance to win the race and that was definitely true here this weekend.”

In the opening round of eliminations, run Saturday night with the event concluding on Sunday, Tutterow went 3.66 to beat Wesley Jones, who ran a career-best 3.58 at 211.30 to qualify fifth, but had his hands full just keeping his ’41 Willys on his side of the race track.

Round two saw Tutterow slow a little to 3.71 seconds against the ’71 Mustang of fellow North Carolinian Terry Leggett, who had to shut down early with tire spin. That set up a semi-final match between “King Tut” and Jose Gonzalez of the Dominican Republic, who in the previous round posted a 3.61 pass at an astounding 227.84 mph that marked the highest speed ever attained by a doorslammer race car over an eighth mile.

Gonzalez ran into traction problems in the preferred right lane, though, allowing Tutterow to advance to the final with a 3.72 run at 209.07. Waiting for him was Buhumaid, who started from the number-three position and set low ET of the meet with a 3.52-seconds blast at 217.39 mph in his Friday-night win over David Reese. Buhumaid then defeated teammate Bader Ahli in round two with a 3.58, the quickest run of the round, before ousting defending class champion Bubba Stanton from the semis with another 3.58 pass. 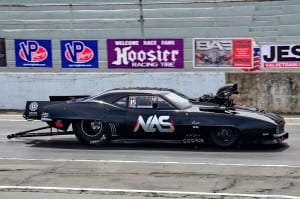 It looked like Buhumaid was poised to score his second PDRA victory after securing his career first at the series’ season opener last month at Ennis, TX. However, an early start at the starting tree (-.084) negated his third 3.58 in a row and allowed Tutterow to coast to the win in 4.63 seconds at just 111 miles per hour.

“He redlighted and I saw it so I didn’t want to chance it and just shut it down and coasted on down here. We didn’t have a great weekend, but this makes up for it,” Tutterow said of the win. “I want to thank my crew for sticking with it and we had Mr. Wells (GALOT team owner) here, too, so it’s always good to do well when he’s here.” 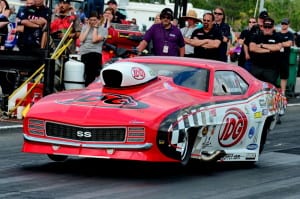 Smith easily handled Jim Sackuvich in the opening round of racing, then met up with past class champion Stevie Jackson in round two. Jackson went straight to fully staging his ’69 Camaro in an attempt to unsettle “Tricky Rickie,” but the veteran driver rose to the challenge as both left with nearly identical reaction times. After that it was all up to Smith’s ’69 Camaro to get the job done, outrunning Jackson’s machine by 15-hundredths to the eighth-mile stripe. “Yeah, I tried, but Rickie was ready for me. I’ll get him next time, though,” Jackson promised. 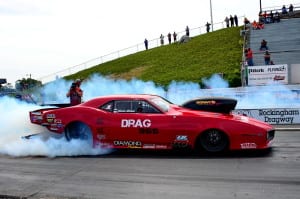 Smith then got past John Camp after both suffered traction problems in the semis, while on the opposite side of the ladder Harris got past Pat Stoken, Mike Castellana and Cox in the semis.

“We put an automatic in the car and that was something for me to get used to; I mean, I’m used to doing that left foot action,” Smith revealed. “And we’re getting it done with a Pat Musi 903. That used to be a big-ass motor; now I’ve got the baby motor out here. But it done good; the biggest thing was the track was a little crappy, but that probably helped me here.” 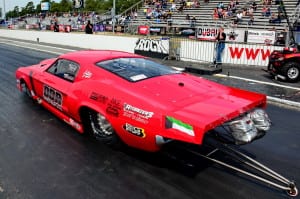 Driving his twin-turbocharged ’67 Shelby Mustang, New Jersey’s Anthony Disomma finished on top of the Precision Turbo Pro Boost qualifying list with a run of 3.80 seconds at 210.24 mph. He then went a little quicker in the first round of racing to beat Jim Bell with a 3.79 at a potential record 213.33 mph, though he would have to back it up within one percent to make it the official top speed.

The final was a match-up of twin-turbo’d ’67 Mustangs as Kevin Fiscus’ similar ride started from the third slot on the qualifying list and made it past the cars of Doug Winters, Jeremy Ray and John Strickland in the semis. A month earlier in Texas, Fiscus defeated Strickland in the Pro Boost final of the PDRA’s 2015 season opener. 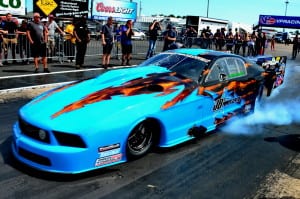 This time, a .021 advantage off the starting line determined the outcome as Disomma’s 3.856 at 211.30 beat the 3.851 at 205.63 put together by Fiscus. It came at a cost, though, as a backfire right at the finish line blew the intake sky high off the top of Disomma’s 528-cubic-inch engine. The good news was his final-round speed officially secured the record for Disomma.

“I just saw a big flash but I didn’t know what happened. I saw something pop out of the hood and now part of the hood’s gone,” he said. “We made good progression each pass. My guys worked hard and it paid off today.”

Eric McKinney’s bike was dripping oil by the time it finished a 4.09 at 177.16 pass in the Drag 965 Pro Extreme Motorcycle final to handily defeat a 4.36 at 156.19 by first-time finalist Ricardo Knights. But that didn’t matter to the defending PDRA champion, who was the only rider to remain in the 4-ohs through all four rounds of eliminations, too, beating Wes Hawkins, Travis Davis and Dave Norris in the preliminaries.

“We had to change the motor right before the semis, put old faithful in it, and it pulled us through,” said McKinney, who started from the number-one position with a 4.05 at 176.28 mph aboard the 2012 Suzuki tuned by teammate and crew chief Ashley Owens. “I think he got out on me, my reaction times have been terrible here all weekend, so I had to count on my team a lot this weekend. This thing makes a ton of power on the top end.” 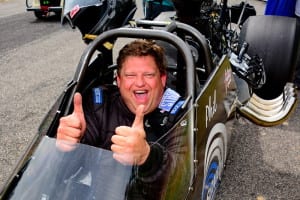 In the brand-new Powershield Pro Open Outlaw class for roots-blown or turbocharged dragsters and altereds, Phil Esz of Amelia, OH, started on top of the eight-car field with a 3.64-seconds pass at 202.67 mph in his BAE Hemi-powered Spitzer dragster.

When eighth-place qualifier Latchman Nansraj failed to show for round one Esz simply broke the starting-line beam to advance to the semis. Once there he set low ET and top speed for the class with a 3.62 run at 204.32 mph.

He had another easy pass in the final round when number-two qualifier Eddie Lykins left before the tree was activated, handing the win to Esz, who still ran it through in 3.67 seconds at 203.80 mph. Upon climbing from his car Esz immediately praised the tuning expertise of Rick Hickman for the win and thanked members of Todd Tutterow’s GALOT team for their help in the pits.

“I hope this class really catches on and we get some more fast cars in here racing heads up and having a blast,” Esz said. “I’m really having fun.”

Class rookie Tricia Musi made a real statement when she qualified her ’09 Dodge Stratus on top of the 16-car MagnaFuel Top Sportsman field in Rockingham with the quickest and fastest eighth-mile pass in class history. In the same car campaigned by sister Lizzy Musi in Pro Nitrous last season, Tricia ran 3.909 seconds at 193.07 mph to earn the top spot, but lost in round one of eliminations with a red-light start against ninth-place starter Glenn Butcher.

Musi still left “The Rock” as a winner, though, after defeating 2014 class champion Dan Ferguson in the final of a special Chassis Engineering shootout for the top four Top Sportsman qualifiers. “This is only my second race so I’m pretty happy to already win something,” she said. “Next race I’m going to go for the record, too.”

In the mean time, 18th-place qualifier Ronnie Proctor was inserted into the 16-car field as an alternate for Barry Daniluk in the number-three slot after the Canadian had to withdraw with damage to his engine beyond trackside repair in the final qualifying session. Don Rudd also entered as an alternate for Cheyenne Stanley in 12th place after Stanley left the track following the sudden death of his grandfather.

Proctor, from Harpers Ferry, WV, made the most of his opportunity with wins over Randy Primozic, John Lassiter and Lester Johnson to reach Bruce Thrift in the final round. Proctor dialed in his ’09 Mustang at 4.22 for the final and ran 4.223 at 168.68 to earn his first PDRA race title over the 4.165 at 168.37 by Thrift, who dialed in at 4.14 for his late-model GTO. 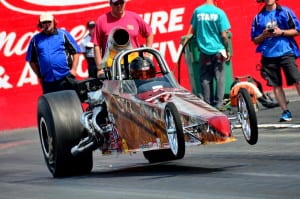 The Dart Machinery Top Dragster title in Rockingham went to number-eight qualifier Bo Upton, who opened eliminations with a big win over top qualifier Bob Sheridan Jr., which earned him a bye run in the second round since only 14 entries made the trip.

Upton beat Russ Whitlock in the semis to set up the final against fourth-place starter Barry Brown, who beat Angie Travis, Jimmy Sackuvich and Craig Sullivan to get there.

Running against a 7.90 index, Preston Tanner of Rennselaer, IN, ran a dead-on 7.900 at 81.50 mph in the Huddleston Performance Pro Jr. Dragster class to beat a 7.910 by Noah Johnson in the final. The Huddlestone Top Jr. Dragster trophy went to Samuel Peterson, grandson of Rockingham Dragway owner Steve Earwood, after he ran 7.915 on a 7.90 dial in to Caleb Russell.

The PDRA returns to action Apr. 30-May 2, when it visits Thunder Road Raceway Park, near Shreveport, LA, for the inaugural PDRA Cajun Nationals.