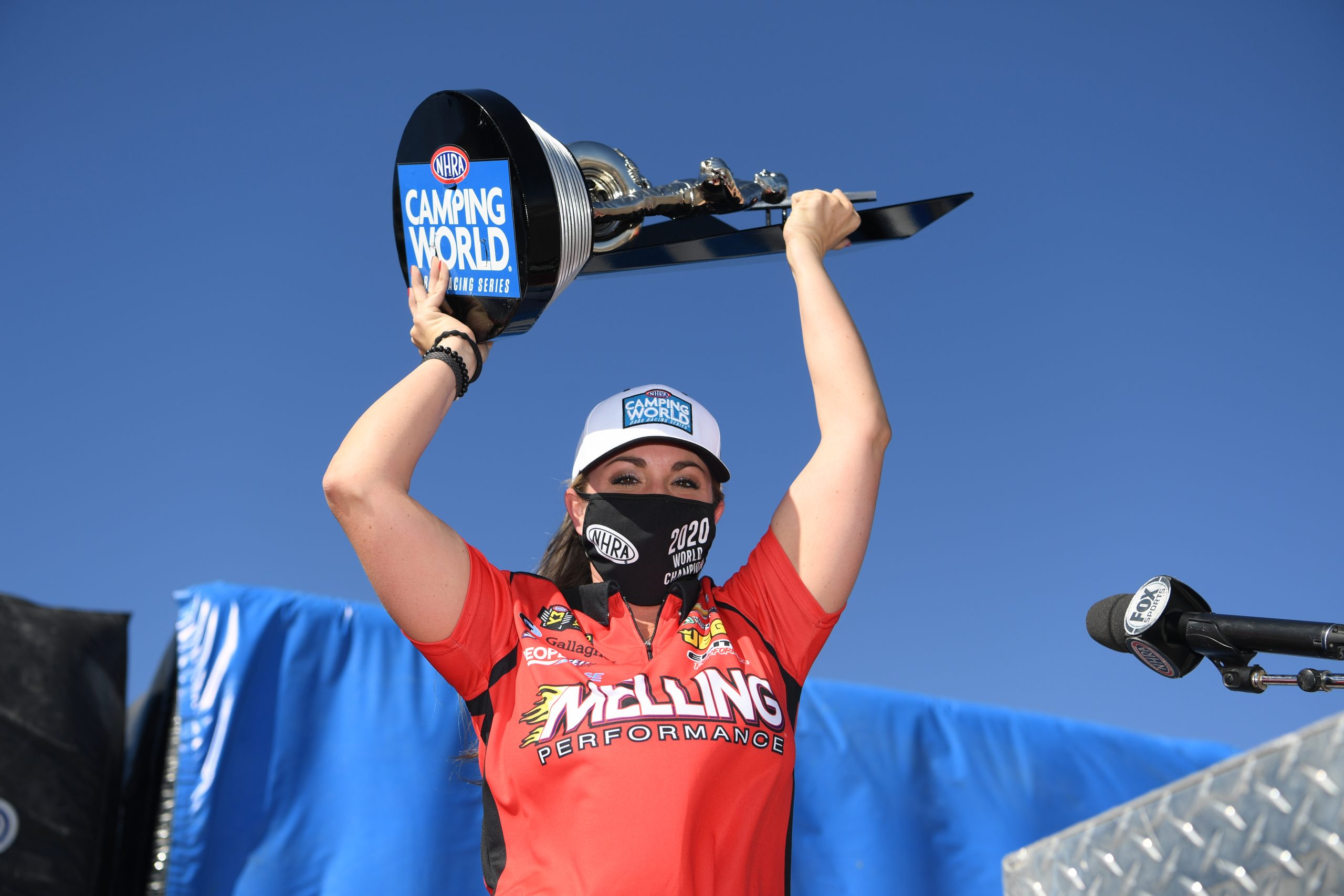 Erica Enders has made plenty of history in her standout Pro Stock career.

Her accomplishment on Sunday in Las Vegas may have been her biggest yet.

Enders clinched her fourth Pro Stock world championship during the NHRA Finals at The Strip at Las Vegas Motor Speedway, giving her the most titles of any female in NHRA history. She surpassed greats Shirley Muldowney and Angelle Sampey on Sunday, moving into a legendary category all her own.

But Enders wasn’t done there, rolling to the victory with a run of 6.643-seconds at 206.39 mph in her Melling Performance/Elite Motorsports Chevrolet Camaro in the final round. It was the perfect capper to a challenging and unprecedented 2020 season, where Enders yet again proved to be the cream of the crop — this time in historic fashion.

“What an unbelievable day,” said Enders, who earned her seventh victory in Vegas. “This place has been so good to me, but I couldn’t do it without my team. We persevered and dug deep, and we found a way to make it happen. I am a lucky girl to live the life I do.”

Sunday was one of Enders’ finest moments in a year where she performed at a high level time and time again, winning back-to-back championships for the second time in her career.

The championship was clinched early on Sunday when Jason Line and Jeg Coughlin Jr. both lost in the first round. That handed the title to Enders, who was quickly overcome by emotion.

Winning a fourth championship had been high on the team’s priority list, with Enders frequently mentioning how much it would mean to her.

With it becoming reality on Sunday, it took a moment for it to sink in, but Enders was quick to thank a talented braintrust that has put together a dominant Pro Stock program.

“I speak so highly of these guys, I mean it from the bottom of my heart,” Enders said. “With (crew chiefs) Rick Jones, Mark Ingersoll, Rickie Jones, (team owner) Richard Freeman has organized the most perfect group of people. I’ve also got to give a big, deep thank you to Mark Melling and his family for sticking with us and stepping up to the plate when this year has been the most challenging year we’ve ever seen.

“Gallagher, PEOPLEASE, Transportation Impact, Mark and Marshall Stockseth, and Chevrolet, they’ve all been huge supporters. It’s just a blessing to have support like we do.”

Enders wasn’t done handing out thanks, either.

In her storied journey to becoming a four-time champion, Enders’ family has been a major part of that success and support system, and she recognized them as well before hoisting the championship trophy.

“I’ve got to give a lot of credit to my sister (Courtney),” Enders said. “She stands beside me, she stands behind me and she has my back. She’s the best friend I could ever ask for, as well as my father (Gregg), who gave me the mental strength to get through any of this.” 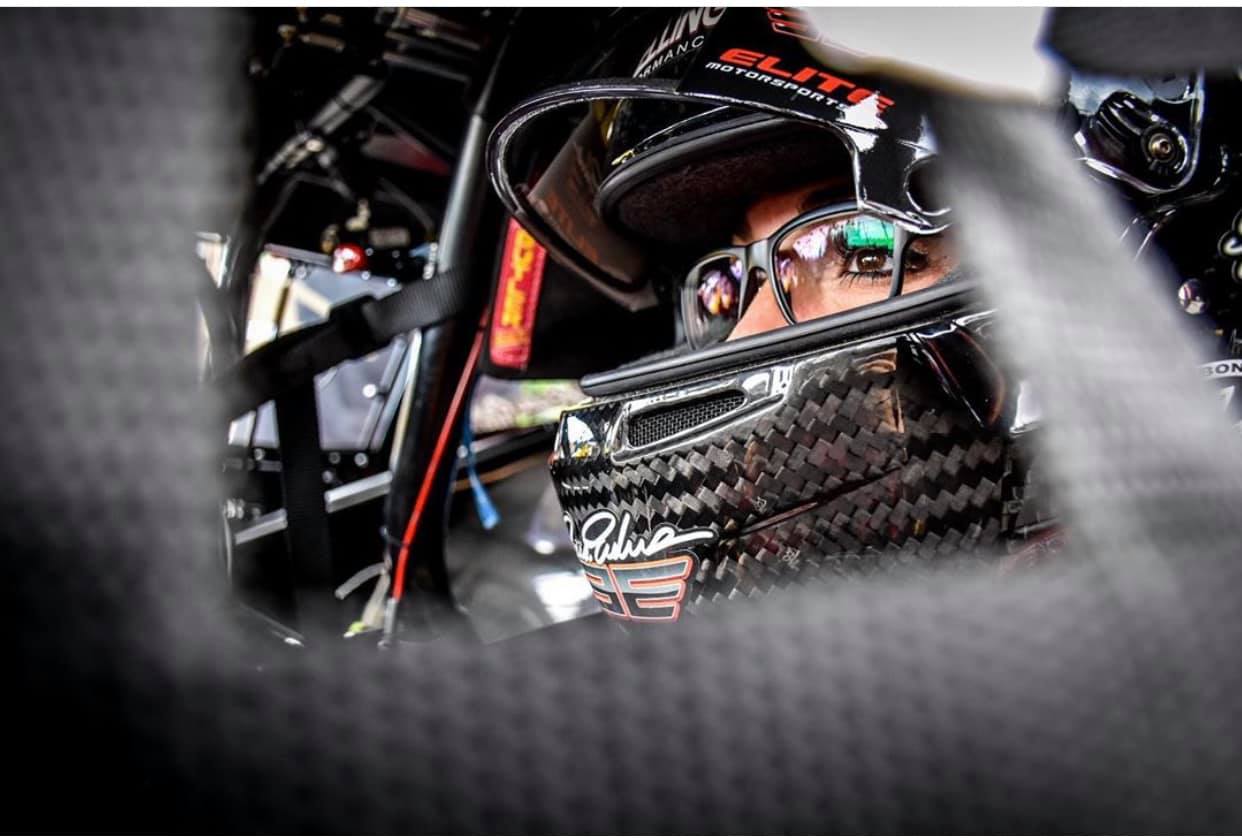 The mental strength was evident in Vegas, as Enders gathered herself after clinching the championship and then was dominant the rest of the day. She was .029, .015 and .016 on the starting line over the final three rounds, beating longtime rival and No. 1 qualifier Greg Anderson on a holeshot in the semifinals.

Enders capped off the magical day a round later in the final round, picking up her fourth win of the season and 29th in her career. She was a perfect 4-0 in finals this year, and her four victories were the most of any driver in the class.

It started back in February with a victory in Phoenix and continued months later at the U.S. Nationals. In between was five months of down time as the NHRA didn’t hold a race due to the COVID-19 pandemic. But Enders, who has 55 career final round appearances, won three races when the season resumed, starting with the U.S. Nationals and continuing with St. Louis and then Las Vegas.

She didn’t suffer a first-round loss all year and put together a spectacular 25-6 record in eliminations, standing head and shoulders above her competition to reach the historic championship level.

“It’s no secret that I’ve struggled this year, the last couple of years honestly,” Enders said. “It’s been an uphill battle. But all of these guys on this team, they give their lives to this. I could not be more proud. I’m so blessed and happy right now. I’ve never been in a situation like that where I’ve depended on other people to handle it for us. I love this life I get to live.” 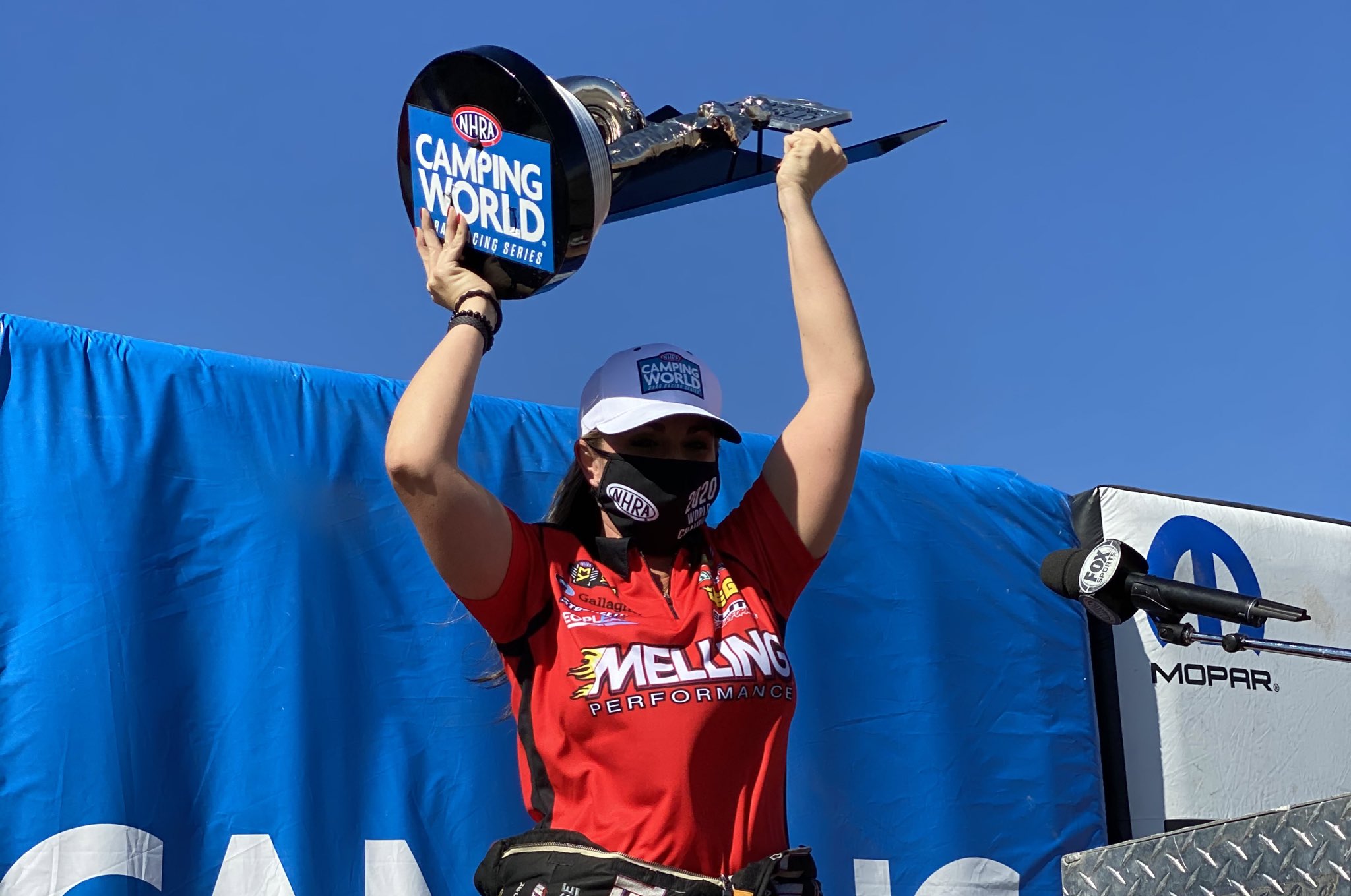