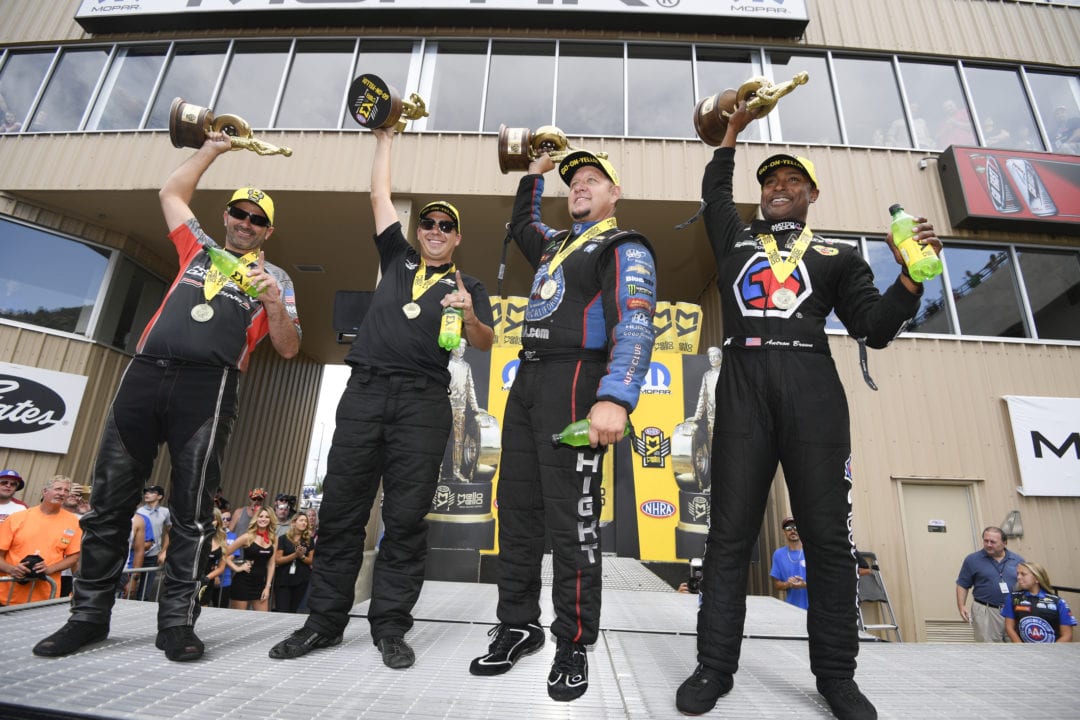 Hight earned the victory with a 3.995-second pass at 317.57 mph in his Auto Club of Southern California Chevrolet Camaro against Tommy Johnson Jr. who ran a 4.099 pass at 297.16 in his Make-A-Wish Dodge Charger R/T during the final round. He earned his first victory of the season and the 38th of his career. Hight’s win also marked the 13th consecutive season in which he has earned at least one victory. 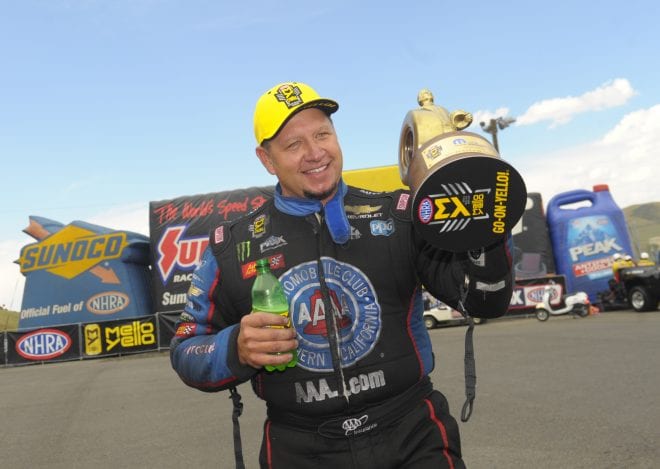 “We definitely struggled through the first few rounds and we were lucky to get those round wins, but I have a great team who figured things out and helped get me to the winner’s circle,” Hight said. “It’s definitely a long-time coming and we hadn’t had much luck, but today we had some luck and we hope this continues throughout the Western Swing.”

Hight jumped up to third in the standings with the victory, while Ron Capps and Matt Hagan retain their position in the top two.

Brown knocked off teammate and No. 1 qualifier Leah Pritchett in the final round with a pass of 3.792 at 319.82. After having lost his three previous final round appearances, Brown now has three victories on the season and 64 in his career. 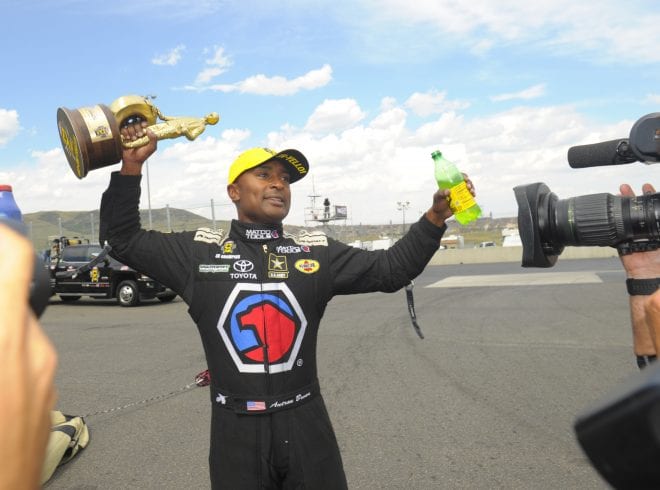 “This race definitely put us through a marathon this weekend, but seeing those win lights makes it all worthwhile,” Brown said. “Next year when we come out we know the bar will be raised even more at this track with all of this information all of these drivers learned this weekend, but we feel like we have a good idea how to get things done here in Denver.”

Brown surpassed Leah Pritchett to take the second spot in the Top Fuel standings, while Steve Torrence remains in first after a quarterfinal appearance this weekend.

In Pro Stock, Skillman drove to victory with a 6.916 run at 198.15 in his Ray Skillman Chevrolet Camaro to defeat points leader Bo Butner in the final. He has won back-to-back events and now has five career victories. 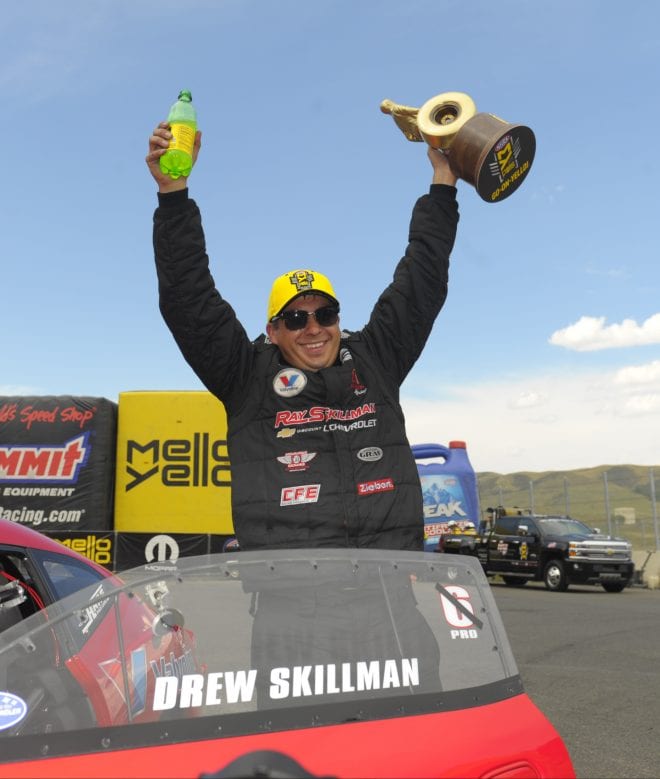 Skillman was the No. 1 qualifier and maintained that success with round wins over Richie Stevens and Jason Line on the way to his second consecutive victory this season. Butner qualified in the ninth spot and took down Allen Johnson, Vincent Nobile and Erica Enders before reaching his sixth final round of the season, tied for the most in the category.

“Our car kept running the same numbers, which is the sign of a good car and a great team,” Skillman said. “We have finally figured out a way to put it all together, and as long as we stay aggressive as a team we know we can win.”

Skillman sits in seventh in the standings as he became the first Pro Stock driver to win back-to-back races in 2017, while Bo Butner stays in first following his runner-up showing. Greg Anderson and Tanner Gray round out the top three in the points standings.

Krawiec finished atop the Pro Stock Motorcycle field with a 7.145 pass at 188.28 in his Screamin’ Eagle Vance & Hines Harley-Davidson to defeat Matt Smith in the final round. After notching his 35th career No. 1 qualifier on Saturday, he earned his second victory of the season and 38th of his career. 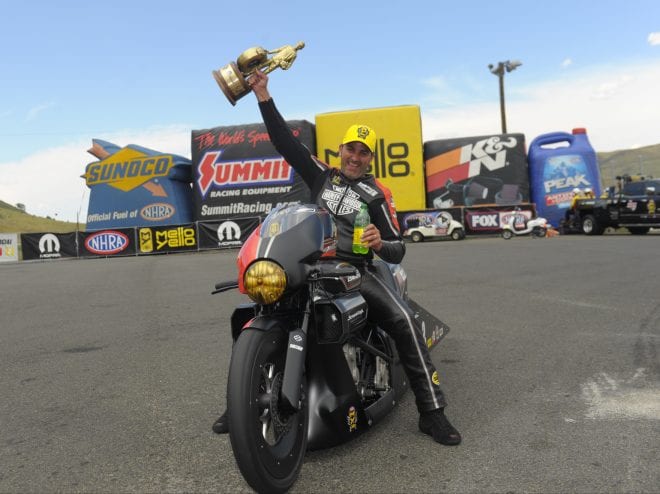 “We’ve gotten off to a slow start since we had to switch bikes, so we were behind in terms of figuring out the strengths of this new bike and how it works,” Krawiec said. “We really like where we are at currently, and we’re going to try and keep this momentum going on the West Coast.”

Krawiec remains in second following his second victory in seven events, while LE Tonglet is still atop the standings despite a quarterfinal exit.