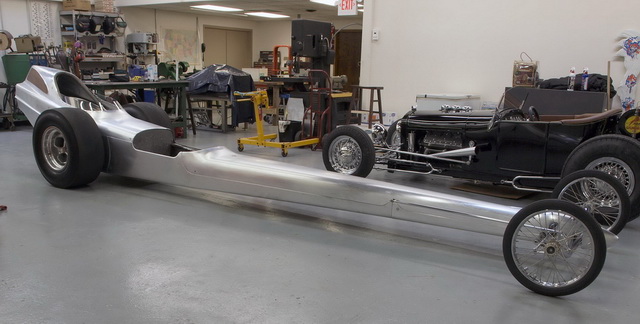 Steven Andersen lived in Europe, graduated with a master’s degree in Fine Art from the University of Minnesota and had a life of luxury in New York City. He worked alongside Andy Warhol, signed autographs and even had a book published on his work by the Minneapolis Institute of Art. After leaving New York City, Anderson even had established his own nationally-recognized print shop.

But with all that, the 67-year-old Anderson could still never truly forget his very first true passion – drag racing.

More than 45 years after exiting the seat of a Top Fuel car, Andersen couldn’t resist the urge to get back behind the wheel, ultimately leading him to Frank Hawley’s Drag Racing School. 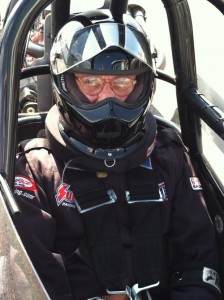 “I guess it’s just that addiction to the sport. It’s hard to get out and stay out,” Anderson said.

Andersen, who lives in Minneapolis and is a longtime member of the Gopher State Timing Association (GSTA), got back in the sport in 2005, rebuilding cars and dragsters. But there was the itch to do more and, within a few years, Andersen felt the desire to drive.

The next step was getting licensed and that’s where Frank Hawley’s Drag Racing School came into the picture. Andersen attended the two-day class in February, driving a Super Comp car to make his required passes and get licensed. Oddly enough, Andersen’s times in the 8.50-range driving the Super Comp car were similar to the times he posted driving a Top Fuel car from 1965-1966. Driving the car at Hawley’s Drag Racing School also gave Andersen the rush he was looking for when he returned to the sport.

“It was the most fun I’ve had as an adult,” Andersen said. “We never launched that hard in my day. The way the Super Comp car pulled all the way down the track, it was so much fun. “I could remember what driving was like, so I knew what to expect, but it was just the most incredible time.”

Andersen had restored an A dragster and even located close friend Tom Hoover’s 1966 Top Fuel car and has been restoring it over the last few years. But when he went from wanting to rebuild to drive, the input he received told him the best place to get licensed was at Frank Hawley’s school.

After attending, Andersen could see why and he joyfully reflected on his two-day experience.

“Frank is an amazing teacher and has just the most incredible grace with people. Obviously he’s extremely knowledgeable and it never felt like he was talking down to anyone,” Andersen said.

“The more time I was in the classroom, the more I wanted to be there. The amount of knowledge you could pick up in two days was just incredible. I couldn’t think of anything better for someone to experience. “There were so many parts that just fascinated me and the volume of info he has is just amazing.”

Andersen’s journey to the school is certainly among the most amazing of Hawley’s students, and it’s one that spans more than five decades across the world. The Minneapolis native started racing in the late 1950s, advancing to Top Fuel in 1965.

After finishing out his second season in Top Fuel, Andersen was drafted into the Army and then traded with the Navy, serving in Vietnam for nine months in 1967. Andersen then spent time in Europe before returning to the United States, where he dove into the art world. After receiving his Master’s Degree in Fine Art from the University of Minnesota in 1972, Andersen became one of the top fine art master printmakers in the world.

It took him to New York City where he worked with the likes of Warhol and other top artists in the day, producing original limited edition fine art prints that were among the most coveted in the industry. After leaving New York City in 1975, Andersen started his own shop in Minneapolis, running that nationally-renowned business until 2010.

By that point, drag racing was already back to being near and dear to his heart. Andersen had built and restored cars, but never drove the Hoover dragster he restored because he didn’t have the license. With thoughts on driving it at the NHRA Hot Rod Reunion’s famed Cacklefest, Andersen found Hawley’s school.

“After being there, I just had a greater appetite to learn,” Andersen said. “Everything he says sticks and it’s largely because of his delivery. He’s like a gold mine of info. It’s really important how he structures things after each run. That was just invaluable to me.

“I’ve got that desire and interest to drive once again now. I guess it’s that crazy intoxication of having 2,000 horsepower right there in front of you.”

With that desire to drive as big as ever, Andersen hopes to possibly take part in either the NHRA National Hot Rod Reunion in June at Beech Bend Raceway Park in Bowling Green, Ky., or October’s NHRA California Hot Rod Reunion at Bakersfield, Ca. in October, piloting the eye-catching ’66 Tom Hoover Top Fuel car he’s spent that last six years restoring. In all regards, it truly would be the most remarkable way to bring Andersen’s amazing life story full circle.

“Frank reawakened a lot of things in me,” Andersen said. “He helped me to slow things down and really get focused, and that helped a great deal when I was there. In my day we never did burnouts, so I was a bit nervous with some of that stuff, but Frank helps you get over that quickly.

“Driving that Super Comp car, it was like a world of enlightenment. Since I’ve been there, I’ve expressed to everyone I know to consider the school. It was absolutely the most fun I’ve had in my adult life.”