When Mother Nature decided to wreak havoc on the traditional July 4th celebration at Piedmont Dragway, July 18th ended up being the day for the ZDD Plus Big Dog Shootout.

There was a buzz in the air as 12 Big Dog cars showed up to qualify for the $5,000 monthly prize, including Travis “Carolina Kid” Harvey (above) in Dobbs’ Racing’s former Al-Anabi Camaro, “tuned up” by chassis builder Russ Farmer.

Qualifying was a game of skill, as drivers tried to hook up to an extremely hot track on a day when the humidity was so thick you could cut it with a knife. The low qualifier was Danny Perry’s Bickel-built 2012 Camaro at a 4.005 seconds, with Ed Hoover second at 4.014, and Harvey third at 4.015. 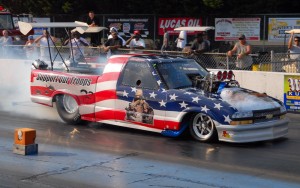 Fourth place went to Matt Giangrande’s 2013 Rick Jones Camaro at 4.017, with Jeff Blasi fifth at 4.052, while Brian Teachman nailed down the sixth spot with the Gotham City 70 ½ Camaro at 4.065 seconds. “Pink Floyd” followed in the blown Camaro at 4.086 and Jason Harris rounded out the eight-car Big Dog field at 4.099 with top speed in qualifying with his Pat Musi-tuned “Warbird” at a whopping 192.10 mph.

The final was anti-climactic, however, as Perry drew a red light and threw away a 3.953 at 190.62 to give the win to Harvey, Russ Farmer and all the gang from Race Tech. 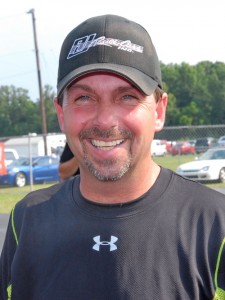 Lawrence used a string of 4-teens to dispose of Pearce and Hawkins to go to the final where he met Cox, where Lawrence ran another 4.158 to defeat the 4.20 run by Cox.

After four events the ZDD Plus Big Dog Shootout points stacks up with Perry leading Harvey by 32 points, with Harris third, Giangrande fourth and Rini still in fifth.

The next ZDD Plus Big Dog Shootout at historic Piedmont Dragway is this Thursday, Aug. 1, with spectator gates open at 4 p.m. and on-track action scheduled to start an hour later.