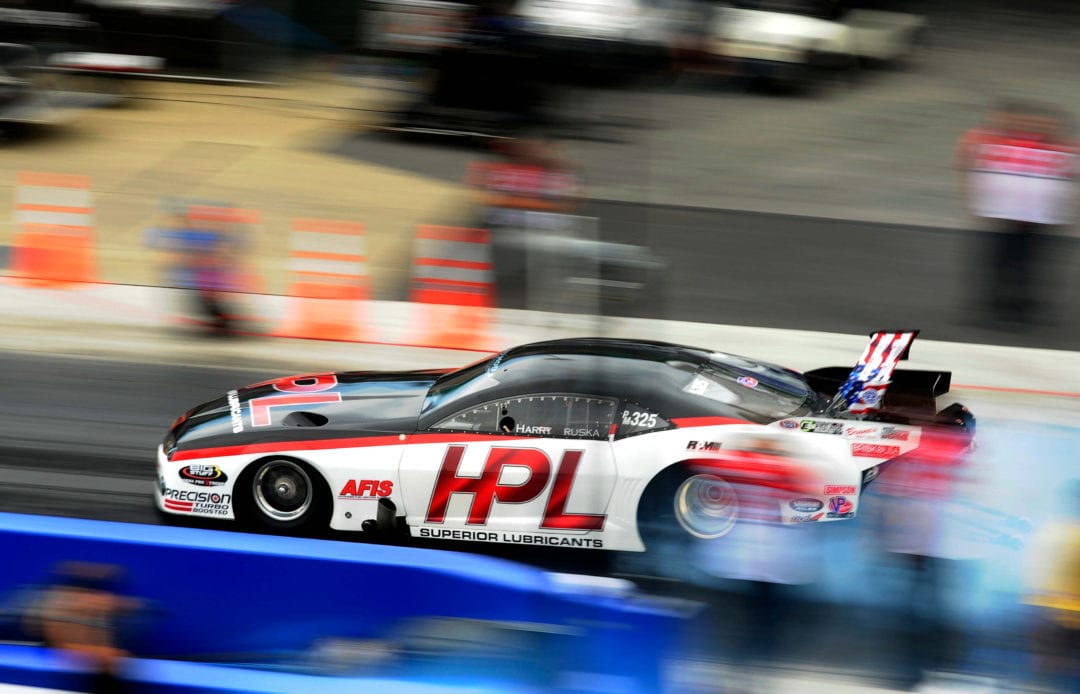 Harry Hruska has seen big-time races, been a part of them and, since jumping behind the wheel of his turbocharged HPL Oil Camaro in 2017, has now raced in them.

For him, though, there’s one that stands above the rest and Hruska is headed there for a second straight year.

It’s the DRAG ILLUSTRATED World Series of Pro Mod at Bandimere Speedway, where Hruska will compete alongside 31 other Pro Mod stars for the $100,000 winner-take-all prize on Aug. 10-11. In Hruska’s mind, it’s simply the marquee event of 2018.

“It’s the race of the year,” Hruska said.

Hruska, who started Precision Turbo & Engine nearly 30 years ago, started his NHRA Pro Mod career a season ago, deciding to start driving after years of fielding a car and putting others drivers in it.

That changed in 2017 and it also meant Hruska’s first time racing on Thunder Mountain, where he competed in the inaugural WSOPM event, falling to Shane Molinari in the opening round.

But there was no denying Hruska had an enjoyable experience, even with the immense pressure of racing for the $100,000 prize. That dynamic of pressure and high-stakes racing, yet still having a thoroughly memorable time made not only the event stand out, but also re-emphasized to Hruska the tight-knit community involved in the Pro Mod class.

“That’s just the strength of the class,” Hruska said. “Your nemesis can be your best friend. It’s not a big deal. (In Denver), there wasn’t as much pressure, it seemed. There was more money, but not as much pressure. It was an amazing show last year and it’s going to be even better this year.”

For one, the field has doubled, adding another impressive layer of talent to the biggest and richest Pro Mod race in the history of the known universe.

The scoreboards will remain off during the shakedown runs, but will be used during eliminations, and teams will also have the opportunity to test for two days leading into the event.

That proved to be a valuable aspect for Hruska a year ago, even in defeat, as he found a solid combination to utilize during the race. But there’s no denying that racing at an altitude of nearly 6,000 feet is the great equalizer.

“That’s the parity the mountain brings,” Hruska said. “We were all kind of second-guessing everything last year. It levels the playing field. We’ll get out there and try to make it a good week. The way we all race, nine times out of 10 racers beat themselves. You’re going to have to go up there, have a good program and be consistent.”

Of course, when there’s $100,000 on the line that mindset isn’t always the easiest to adhere to in crunch time.

But seeing the Pro Mod class get a major spotlight on a remarkable scale for the WSOPM is plenty meaningful in its own right for Hruska. He’s been an advocate of the class for years, pointing to the diversity, parity and difficulty in the class as the key reasons why Pro Mod racing has taken off in a major way in recent seasons.

Adding a race like the WSOPM a year ago also indicates that interest in the category isn’t slowing down anytime soon.

“It’s a big deal because the fans love it,” Hruska said. “I do enjoy that. As long as the fans are happy, we’re happy. Every venue, every race we go to, we get so many people coming up and telling us this is their favorite class. I’ve raced for more than 30 years and I can’t remember people always saying that about one class.”

That’s a buzz that bodes well for August on Thunder Mountain and Hruska has noticed it, too. It has added to his own excitement level, making another trip to Bandimere Speedway an absolute must for the veteran.

“Everybody is getting geared up for that race,” Hruska said. “I’m excited and it’s a great venue. Being the second year for the race, it’s going to be that much bigger and better, building on the success from last year.”