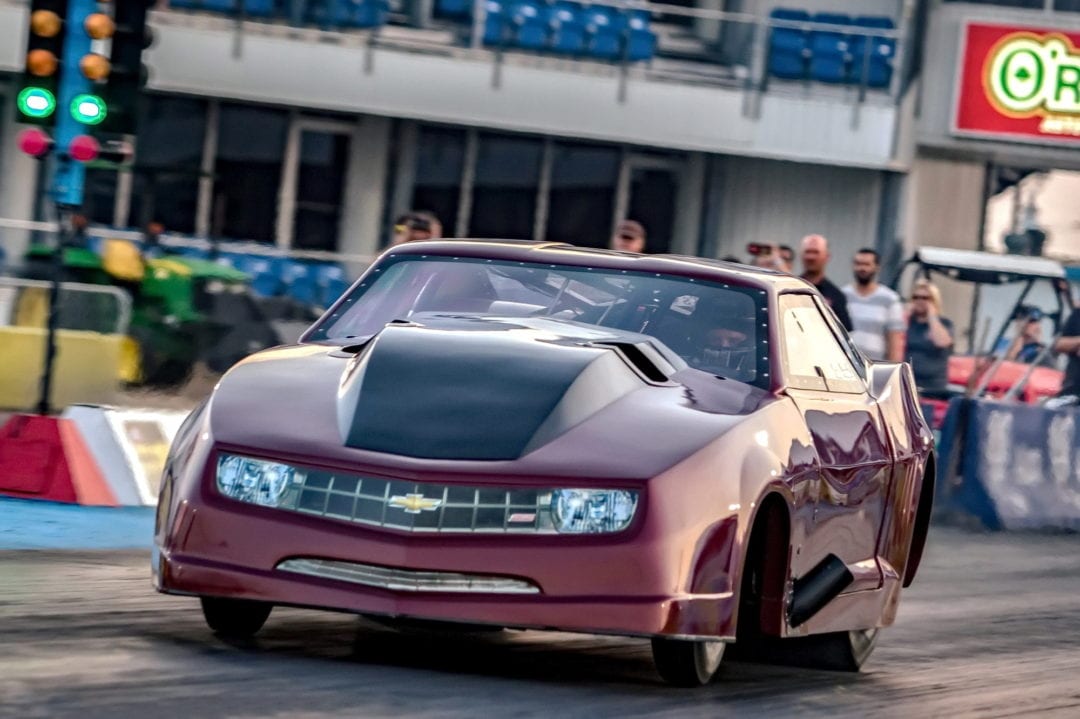 Consistency paid off for Dallas racer Kevin Hargett at the Texas Motorplex July 7, where he opened with a 4.29-seconds pass at 179.44 mph to qualify his turbocharged 2013 Camaro fourth for the track’s monthly O’Reilly Auto Parts Outlaw Pro Mod event. Hargett then ran a series of mid-4.20s to reach victory lane, which marked his second race title for 2018 and his first Texas Outlaw Pro Modified Association (TOPMA) win of the year.

“Despite the heat the track was killer out there and that really helped for me to tell the car what I wanted it to do,” said Hargett, 52. “The car has a twin-turbo setup, so we can control how much boost it has, so instead of turning it way up and trying to run a number that would make my team happy we just decided to make it run just good enough to beat the competition and it worked out okay.” 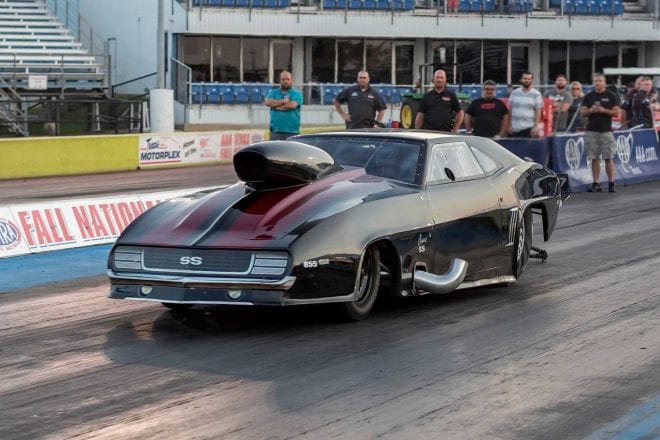 TOPMA points leader Steve Wiley took the top spot in qualifying with an outstanding 3.74-second run at 205.16 mph, but ignition troubles on the starting line with his supercharged ’63 Corvette handed an uncontested first-round win to eighth-place starter Chuck Poindexter and his Chevy Luv pickup. Meanwhile, last month’s winner, Doug Riesterer, advanced past David Baldwin, Tony Strachan also made a solo pass after Brandon McKinney suffered mechanical woes, and Hargett made the quickest and fastest pass of the opening round with a 4.26 at 179.40 mph to defeat Joseph Butler.

“We had raced a few weeks earlier in a final and I won that one with a 4.06 to his 4.09, so I knew Tony could be fast,” Hargett said. “So I turned up the power a little for the final, but I told my guys I didn’t want to make too much of a change.”

When the green flashed for the final, Hargett left with a .071 reaction, which combined with a 4.25-seconds pass at 182.55 mph added up to just one-thousandth-of-a-second advantage over Strachan’s much quicker 4.12 at 179.30 that was negated by an unfortunate .210 reaction time.

“Tony picked what I considered the better lane, the left lane, but I think it may have bit him because he had mentioned to me earlier that night that he could barely see over his hood scoop,” Hargett said of his rival’s uncharacteristically slow start. “I never did see him when we were going down the track and then when I saw the times flash up on the scoreboards I thought I might even have redlit because he ran so much quicker than me.”

Despite the win, Hargett added he was surprised his car didn’t pick up more speed after he tuned it up for the final, but when a Texas Motorplex official showed up at his pit with part of a clamp in his hand, he realized one of his turbo waste gates was hanging on only by its hoses.

“It was still applying some pressure to the other waste gate, but if it had fallen off completely we would’ve had pretty much no boost at all,” he explained. “So that’s why it didn’t go faster, but a 50-cent piece of hose held on just long enough for us to get the win.”

Also visiting victory lane at the Texas Motorplex this past Saturday were Brad Jones with his ’68 Camaro in the 5.0 Index final, Paul Harris in the 5.50 class, Jay Casey with his second-straight monthly win in 6.0, and Bryan McClain in 7.0 Index action. The 7.90 Jr. Dragster final belonged to Jason Rhodes, while 8.90 Jr. Dragster honors went to number-one qualifier Dylan Smoot, and Brody Tigue also claimed his second consecutive 11.90 Jr. Dragster title.

TOPMA and the O’Reilly Auto Parts Outlaw Pro Mod Show will return to the Texas Motorplex Aug. 4, for the fourth of five scheduled events there this year.