Defending world champion Jim Halsey picked up right where he left off at the end of the 2020 season by qualifying No. 1 in Switzer Dynamics Pro Nitrous at the season-opening Professional Drag Racers Association (PDRA) East Coast Nationals presented by FuelTech. Driving his Brandon Switzer-tuned ’68 Camaro, Halsey recorded a 3.65-second pass at 207.08 mph in the third and final qualifying session at GALOT Motorsports Park Friday night.

In the Jr. Dragster categories, Kaylee Love holds the provisional No. 1 spot in Coolshirt Systems Pro Jr. Dragster with a 7.901, beating out Chris Powers II’s matching 7.901 by speed. The current low qualifier in Classic Graphix Top Jr. Dragster is Troy Barton with a .009 reaction time in his Gray, Tennessee-based ’19 Halfscale dragster. 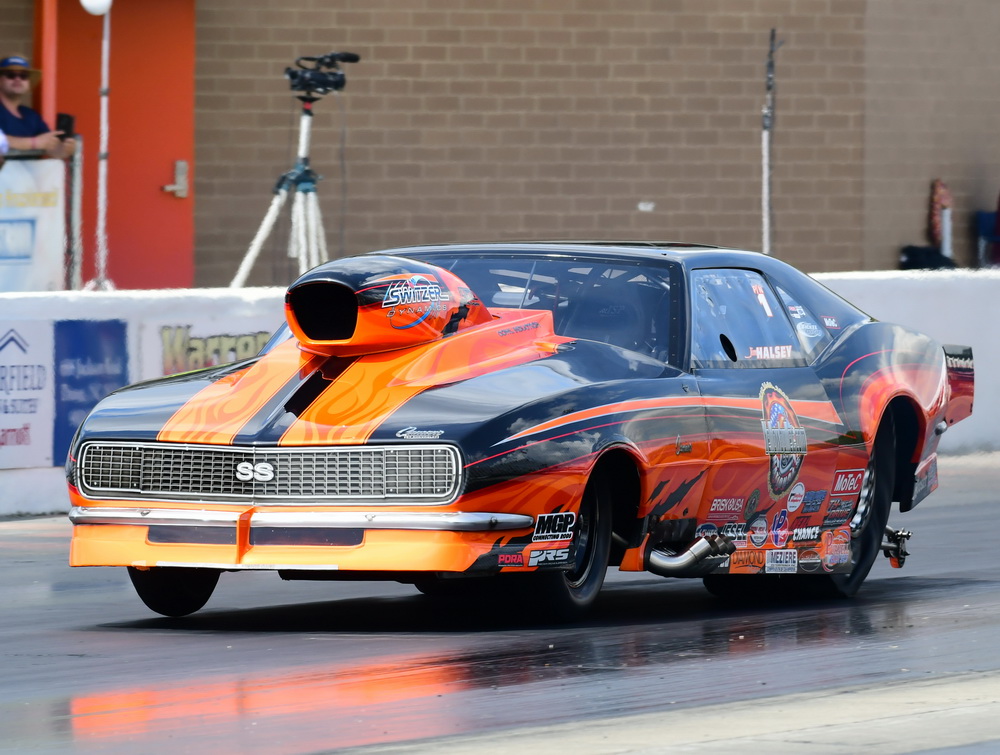 Jim Halsey added yet another low qualifier award to his list of accomplishments in Pro Nitrous when he dropped a bombshell 3.65 at 207.08 to close out the final qualifying session. The defending world champion enters race day with the quiet confidence that helped him earn the last two championships.

“There’s no better way to start the season than qualifying No. 1,” Halsey said. “Our hard work over the winter paid off. It felt pretty good. In Wednesday testing, I was a little nervous. I hadn’t been in the car for a couple months and felt a little rusty. I think we knocked the rust off on that run.”

Todd “King Tut” Tutterow, who won the inaugural PDRA Pro Boost world championship in 2014, kicked off his return to the class with a monster performance to lead a stacked field. Tutterow, driving a second screw-blown P2 Contracting ’20 Camaro for team owner and teammate Kurt Steding, unleashed a 3.662 at 206.35 to take the No. 1 spot by speed.

“Kurt’s given me an opportunity to come over here and run PDRA, and it looks like it’s going to be a good deal,” Tutterow said. “The .66 just shows how good the track is. All the different categories are close, and all the combinations in Pro Boost are close.” 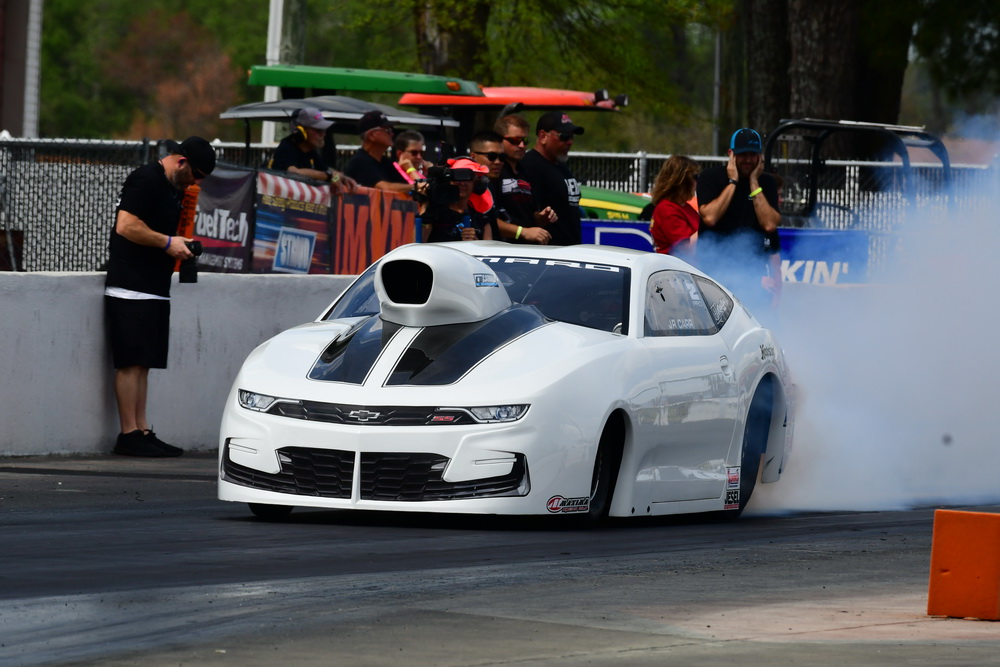 Mountain Motor Pro Stock veteran JR Carr closed out the 2020 season with a win at the World Finals and a runner-up finish in the championship points standings. He ended up back in the headlines to start the season, qualifying No. 1 in his Frank Gugliotta-tuned ’20 Camaro. He stepped up to a 4.048 at 179.47 in the second session.

“This year is the first year that we’ve started out with the same stuff we left with, other than some more power,” said Carr, thanking class sponsor Liberty’s Gears, as well as sponsors CP-Carrillo, Maxima Oil and Moroso. “That’s an easy change to adjust to. Last year we were working with a new car and a new crew. We’re always changing something trying to be better, and this is going to be the first time we really didn’t change anything. I have more confidence today than I’ve had all last year because I know what to expect.”

After struggling in testing, defending world champion Johnny Pluchino posted a 4.09 at 177.91 in his Kaase-powered Strutmasters.com ’13 Mustang to qualify second. He edged out Chris Powers, who ran a 4.093 at 174.93 in his Sonny’s-powered ’14 Camaro. Powers and most of the Extreme Pro Stock competitors are sporting special decals paying tribute to the late engine builder Sonny Leonard, who passed away over the offseason. 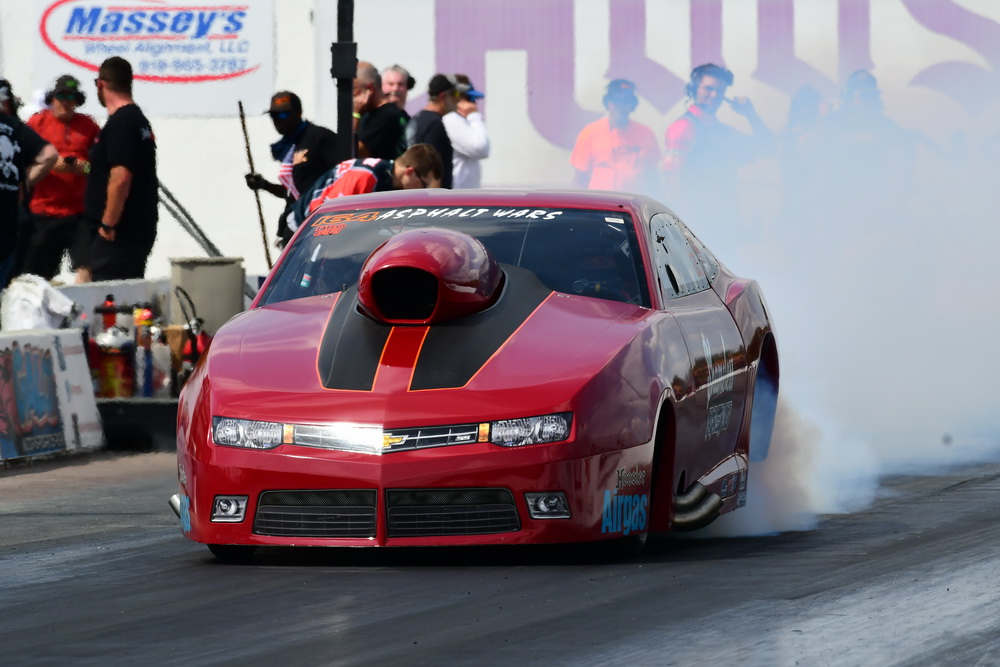 Pro Outlaw 632 E.T. record holder Jimmy Pelcarsky came close to improving the record when he fired off a 4.134 at 170.64 in his Hutter-built small-block-powered ’15 Camaro in the final session. With new sponsorship from $hameless Racing, Pelcarsky rocketed to the top of one of the largest fields in PDRA Pro Outlaw 632 history.

“If we can stay in the mid-teens, I think we have a really good shot at winning the first race,” Pelcarsky said. “I am a teammate with $hameless Racing. We have three cars this year: the ‘Feather Duster’ [driven by Vinny LaRosa], Wes Distefano and our car. There’s going to be a $hameless car in every final this season. I can guarantee that.”

Daryl Stewart in his HRE-powered Chassis Engineering ’12 Camaro followed Pelcarsky with a 4.165 at 170.67. Distefano, the defending world champion, missed the No. 2 spot with his 4.169 at 170.79 in his Musi-powered $hameless Racing/Race Star Wheels ’68 Camaro.

Three-time and defending Pro Nitrous Motorcycle world champion Travis Davis rode his way to the top of the qualifying order on the strength of a 4.044 at 174.91 aboard his Timblin Chassis ’18 Hayabusa, which underwent some changes over the winter. The performance sets up Davis for eliminations, where the Douglas, Georgia-based entry typically comes alive.

“From what we’re seeing, we have plenty of room to pick up and go faster,” said Davis, who thanked Dan Wagner at DTM Performance, Steve Nichols at MaxxECU, Timblin Chassis, his father, John, at Cyclemasters, wife Brandy, son Brayden and Perry’s Performance. “We’re just taking small steps and trying to pick up every round. Usually on race day is when I start picking things up, so I’m actually a little bit ahead of the game compared to where I normally am. I think we’ll be good if we can keep everything together.”

In the first race for Pro Street after a handful of rule changes over the winter, including limiting drivers to running 10.5-inch-wide rear tires, Jesse Lambert qualified No. 1 in his turbocharged ’04 Mustang with a 4.052 at 200.95. Nick Schroeder, who expired the supercharged engine in his ’06 GTO in the final qualifying session, qualified second with a 4.103 at 163.41. Tim Essick took his ProCharger-boosted “Brown Sugar” ’18 Mustang to the No. 3 spot with a 4.177 at 181.79.

Wadsworth, Ohio’s Craig Addis took his new ProCharger-boosted ’21 Spitzer dragster to the provisional No. 1 spot in Elite Top Dragster, standing out with a 3.735 at 193.77. Perennial frontrunner Michael White moved up to the No. 2 spot in the second session with a 3.80 at 191.70 in his ’57 Chevy-themed ’15 Maddox dragster. Kathy Fisher, driver of the ProCharger-boosted “Dragoness” ’15 American dragster, is qualified third with a 3.813 at 187.11.

In Top Dragster 48, Bill Earnest is the No. 1 qualifier in his ProCharged, PAR-powered ’14 Miller dragster with a 3.977 at 183.15, which is just a few thousands away from qualifying for the 16-car Elite field.