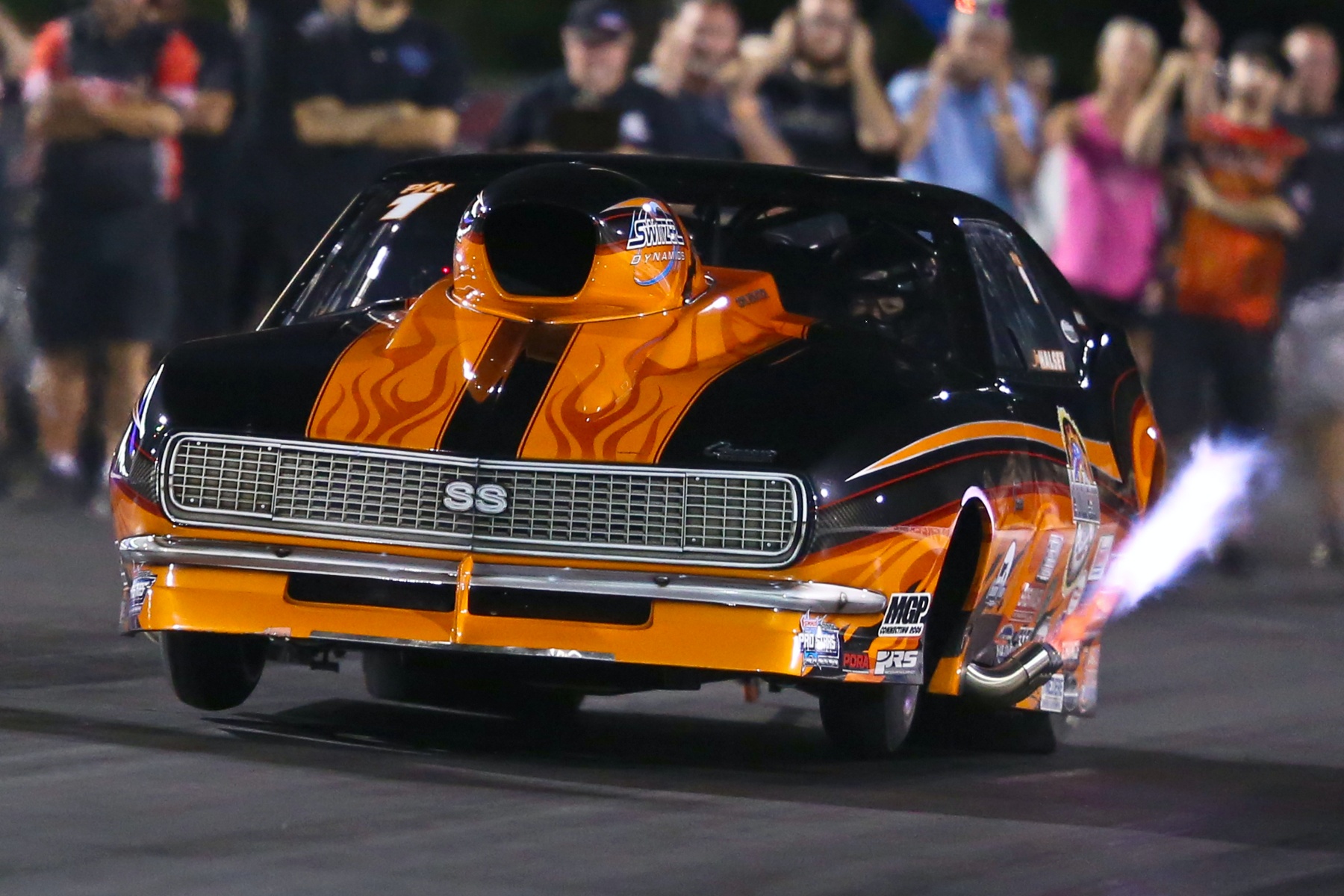 The North vs. South Shootout also included the Jr. Dragster classes, where Nyck Shirkey (Coolshirt Systems Pro Jr. Dragster presented by PRP) and Gavin Wood (Classic Graphix Top Jr. Dragster presented by PRP) were victorious. Shirkey, from Ridgely, Maryland, bounced back from a DNQ at the last race, using a starting line advantage and a 7.915 to beat Chris Suppers’ 7.917, both on a 7.90 index. Wood earned his second win of the season on the starting line when final-round opponent Ayden Tilghman went red, while Wood posted a 9.09 on a 9.03 dial-in for the win. 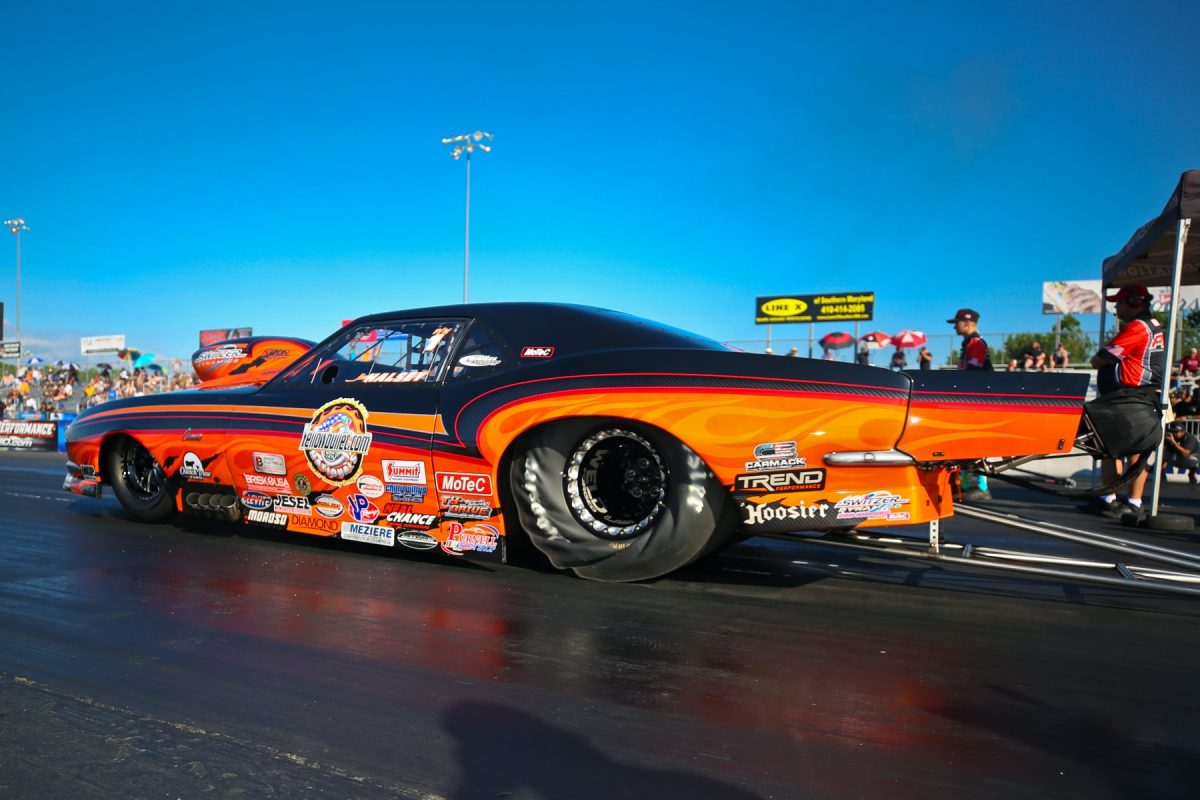 Going into the Pro Nitrous final round, it was clear the North vs. South Shootout event trophy would stay in Maryland. With defending world champion Jim Halsey representing Havre de Grace and Fredy Scriba representing Millersville, the two drivers threw down one of the closest races of the day. Halsey was out of the gate first and stayed out in front through the eighth-mile finish line with his 3.691 at 205.88 in his Fulton-powered “Daddy Shark” ’68 Camaro beating Scriba and his 3.697 at 201.85.

“It’s home. We’re close to home, and a lot of our fans and friends are here,” said Halsey, who thanked his team, including tuner Brandon Switzer, wife Cathy, Eric Davis, Michael McMillan, and Melissa Switzer. “It means a lot, especially to go back-to-back, last year and this year. We struggled a little bit [Friday], so winning today makes it even sweeter. My driving wasn’t the greatest today, so I knew had to do my job in the final. It was close, but I was .030 to his .075. I was glad I could do that when I needed to do it.”

In his second PDRA appearance of the season, Scriba qualified No. 4 in his Musi-powered “Sorcerer” ’69 Camaro before working his way through eliminations with progressively quicker runs. He ran a 3.80 to beat Derrick Ford, a 3.729 to defeat Billy Albert, and a 3.705 over a red-lighting Buddy Perkinson and his 3.69 in the semifinals. 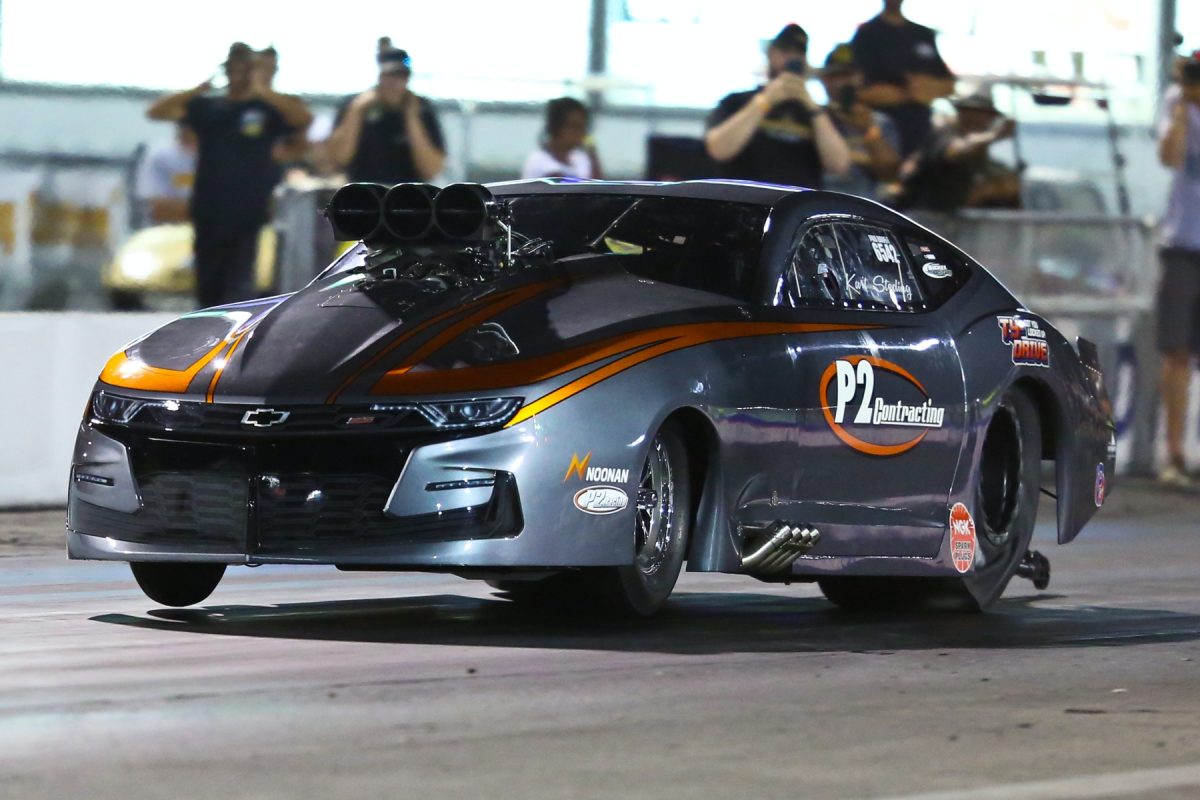 Pro Boost driver Kurt Steding has watched as his tuner and teammate, Todd “King Tut” Tutterow, has put together a solid points lead with wins at the first two races of the season. This weekend, it was Steding’s turn to taste victory, as he defeated Robert Gallegos in the final round. Gallegos left too soon with a .171 red light and slowed to a 3.97 at 140.30, while Steding was just .002 red and fired off a 3.612 at 208.75 to take the win in his screw-blown P2 Contracting ’20 Camaro.

“This win means a lot,” said Steding, who qualified No. 1 for the first time. “I struggled with the knee issue last year. I’d feel uncomfortable driving the car, and it’s hard to give Todd feedback if you’re not driving the car right. This whole team is just in sync. My side of the crew was just in sync and Todd just got it done. I had a smooth ride every single time. We’ve struggled with the car, we got it together now, and I’m super proud of everybody on this team. It just takes a good team to put it together. Thanks to the whole crew, my wife [Wendi], and my son [Ethan] for pulling me into the beams.”

Other than leaving early in the final round, the No. 2-qualified Gallegos had one of the best driving days of his young Pro Boost career. He was first off the starting line in all three prior rounds in his ProCharger-boosted BASF/Crash Champions ’22 Mustang, using a 3.75 to beat Derek Ward, a 3.648 to beat Preston Tanner’s 3.683, and a 3.634 to knock out Randy Weatherford and his 3.64 in the semis. 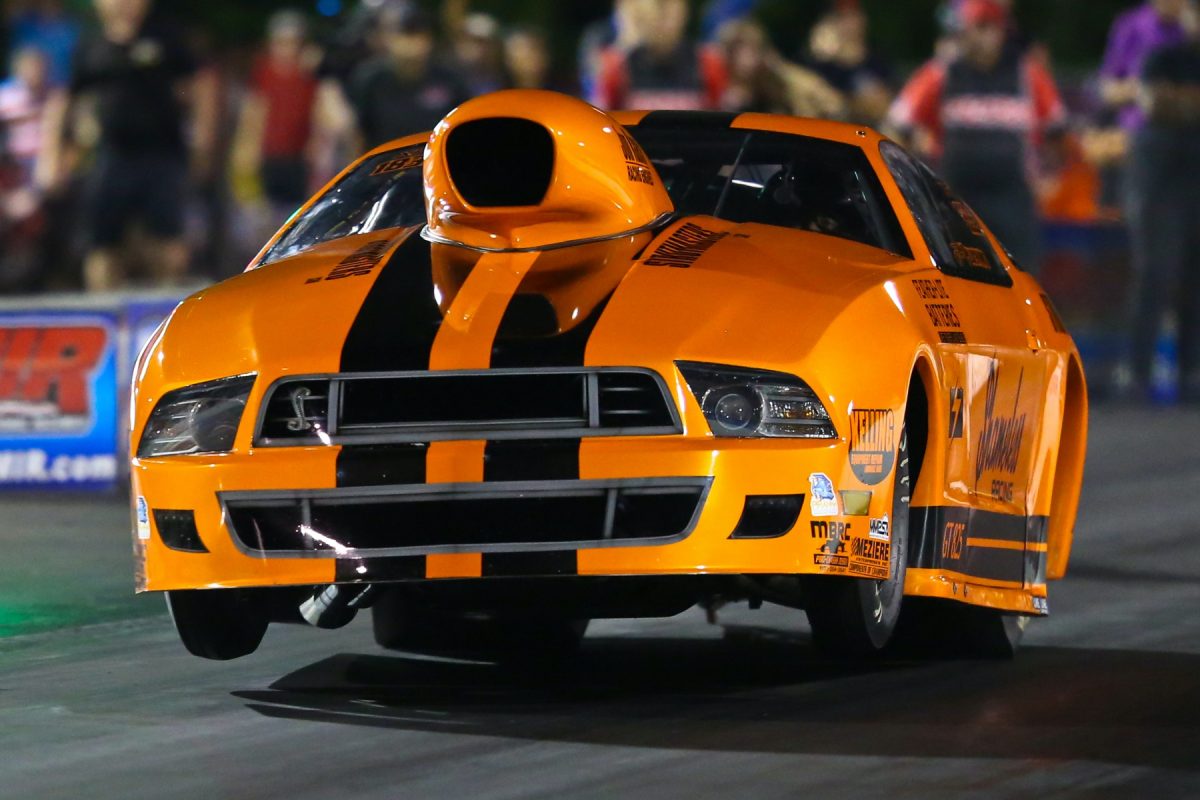 Second-generation Extreme Pro Stock hitter Johnny Pluchino is pushing hard for his second world championship in the class, and he came one step closer to achieving that goal with his second win of the season. Driving his father John’s Kaase-powered $hameless Racing ’13 Mustang, Pluchino posted a 4.071 at 178.07 in the final round to win over Tony Gillig, who slowed to a 5.309 at 93.47.

“This was such a team win,” said Pluchino, who took over the points lead. “We went up and down the racetrack every run this weekend. It was a total blast this weekend. We worked on things and we got through it. It was just a total team win. My dad, my guys, Rich, Brud, and every sponsor and every part that’s on this car, I can’t thank everybody enough. We got old Mo’ on our side now. I feel really good. I feel really good in the car. We’re real confident in the car. We’re having fun right now, and that’s what it’s about.”

Before appearing in his second consecutive final round, Gillig qualified No. 2 in his Kaase-powered Dayco/Gillig-Wagner Motorsports ’10 GXP. He had to pedal his way to victory in the first and third rounds over Kurt Neighbor and Chris Powers, respectively, but his 4.08 at 177.32 over Justin Kirk’s 4.111 in the second round was the second-quickest pass of the day. 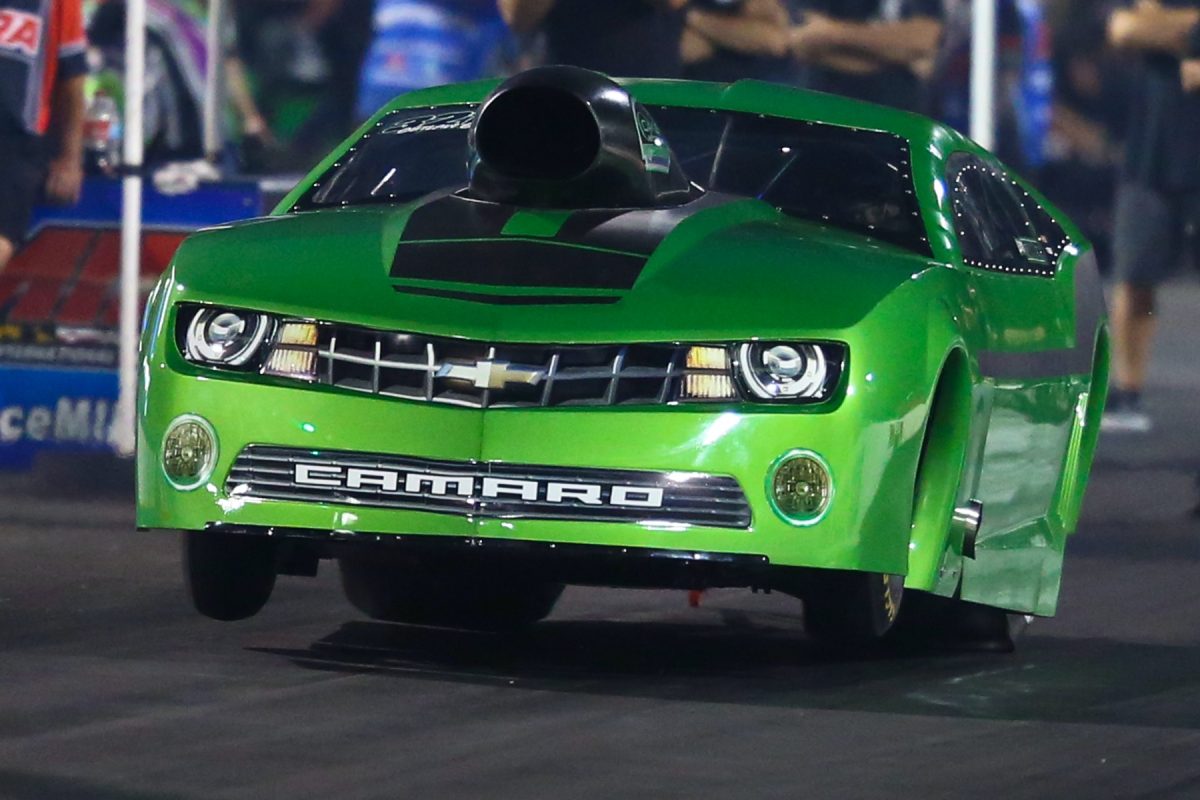 A new Pro 632 event champion was crowned for the third time in four races, as past PDRA Top Jr. Dragster world champion Lexi Tanner earned the win in her family’s Oakley-powered “Thunder” ’15 Camaro. She faced longtime friend and points leader Amber Franklin in the final round, running a 4.213 at 167.24 to deny Franklin her third consecutive event win. Franklin recorded a 4.282 at 146.04 in the runner-up effort.

“From starting out in the Jr. Dragster classes to moving up to Bracket Bash and Top Dragster to running 632 naturally aspirated and slowly adding the nitrous, it’s just been a long time coming and I’m so excited that it’s finally here,” said Tanner, who thanked parents Andy and Missy, brother Preston, Oakley Motorsports, and M&M Transmissions. “I was so excited when we both won in the semifinals. I love racing [Franklin] because it’s a win-win. I’m so proud of her this season and everything that she’s done. I’m so thankful for our friendship.”

Franklin, who defeated Tanner in the final round at the Doorslammer Derby to earn her first win, qualified No. 2 in her Musi-powered “OG Jungle Rat” ’69 Camaro. The second-generation PDRA star improved in every round, stepping up from a 4.222 to a 4.179 in the first two rounds, then a 4.172 at 169.98 to beat Alan Drinkwater’s 4.222. 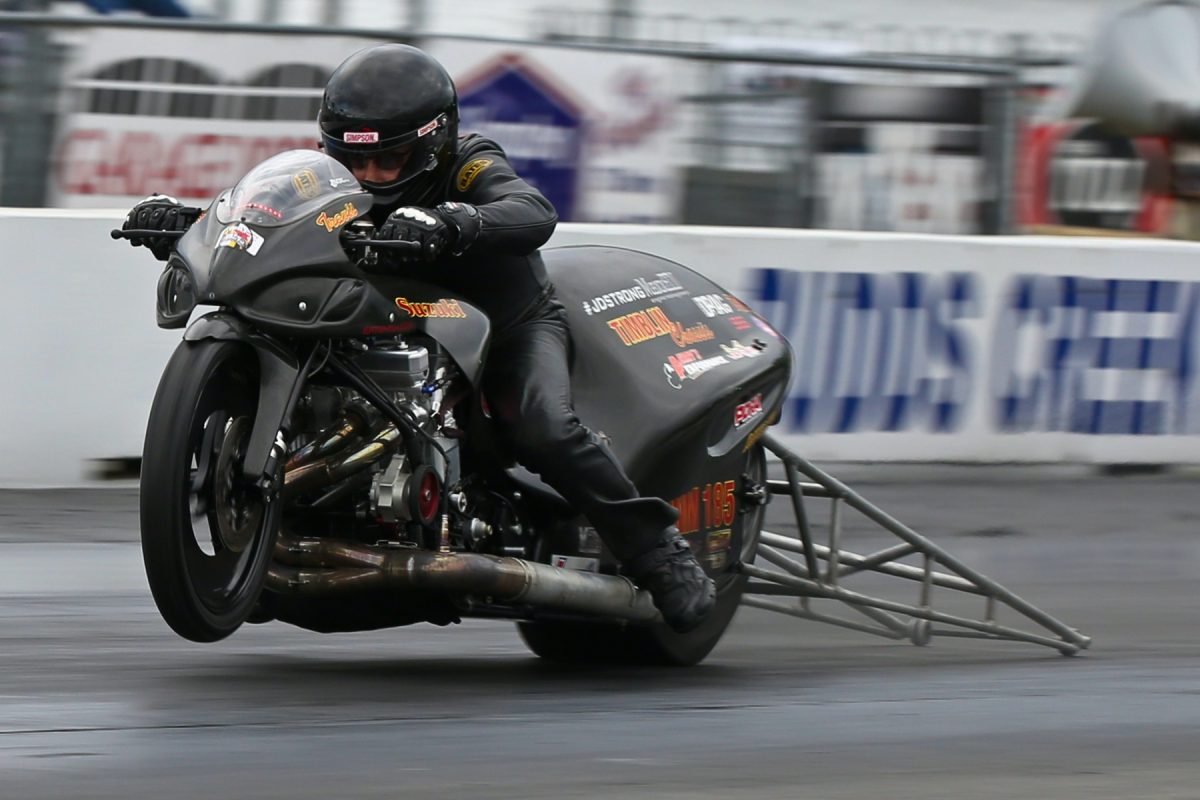 The Pro Nitrous Motorcycle final round featured a side-by-side, 3.99-second battle between two of the toughest competitors in the PDRA’s lone two-wheeled class, multi-time world champion Travis Davis and veteran rider Paul Gast. Davis grabbed a starting line advantage on his Timblin-built Davis Transport ’19 Hayabusa and held that lead to win on a holeshot with his 3.996 at 175.39 beating Gast’s 3.994 at 172.78.

“When you race that red machine, you better bring your A game,” said Davis, who thanked wife Brandy, son Brayden, Dan Wagner with DTM, and Steve Nichols with Maxx ECU. “You better have everything loaded in there and be ready because [Gast] is a tough racer. He’s been doing it a long time. The weekend was pretty good. We tested a new combination, a new motor that we built, on Thursday. It showed a little promise, but we took it out and put old reliable back in. Qualified with the 3.99 and felt like I could pick it up through the weekend, but then the heat got on us. I did what I had to do to win. Our close friend, Walt Timblin [of Timblin Chassis], is going through some health issues right now, and this race here is for him.” 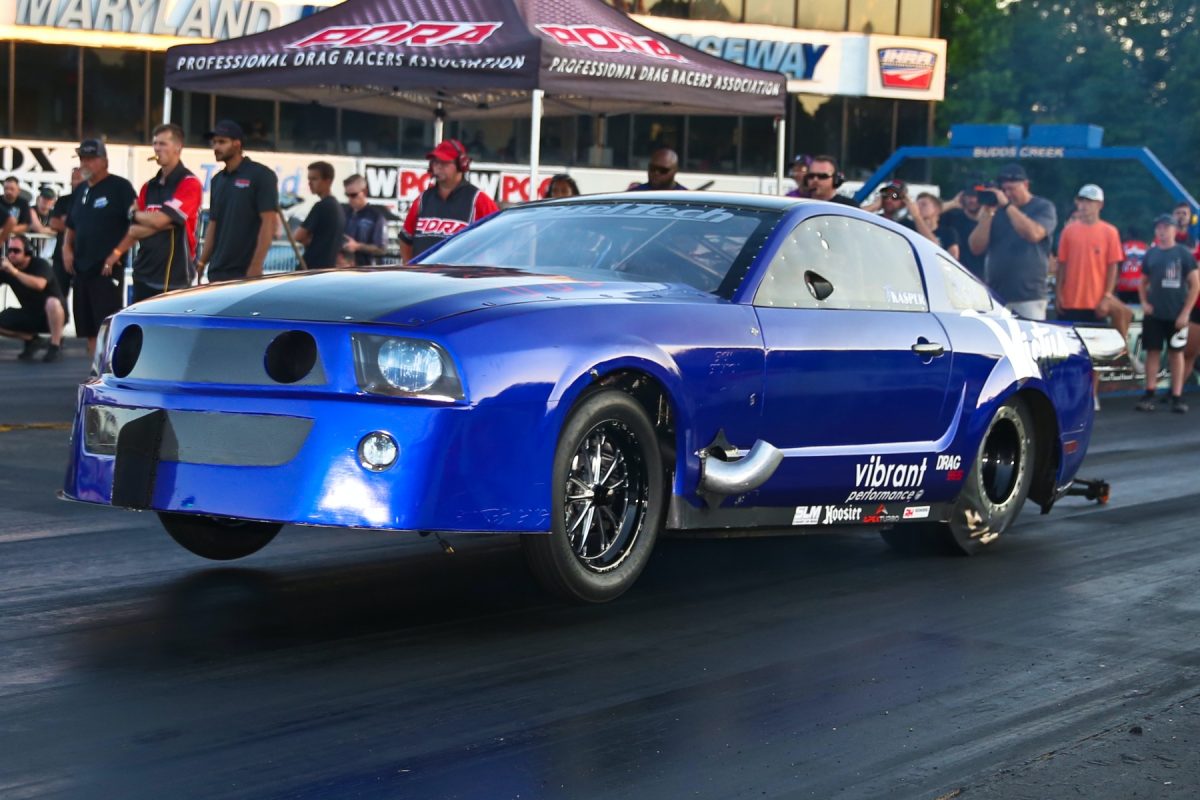 For the second consecutive race, young gun Ty Kasper raced to the Pro Street final round in his turbocharged Victus Sports ’05 Mustang. This time, though, Kasper was victorious for the first time, knocking out defending world champion and home-track hero Tim Essick on a holeshot. Kasper made his best run of the weekend, a 4.067 at 192.22, to hold off Essick’s 4.053 at 185.38.

“This means the whole world,” said Kasper, who thanked sponsors Victus Baseball Bats, Vibrant Performance, ATI Transmissions, FuelTech, and J&E Automotive. “Thursday night, we had all the rods out of it. Last night, we had the transmission out of it. We’re still struggling, but we get to it and we’ll get it fixed. All the hard work has finally paid off. I can tell you there’s no better feeling in this world. I can’t thank my dad, my brother, and my girlfriend enough. They help me out all night, all day. I just can’t believe it. Such a great feeling. I’m ready for the next one already.” 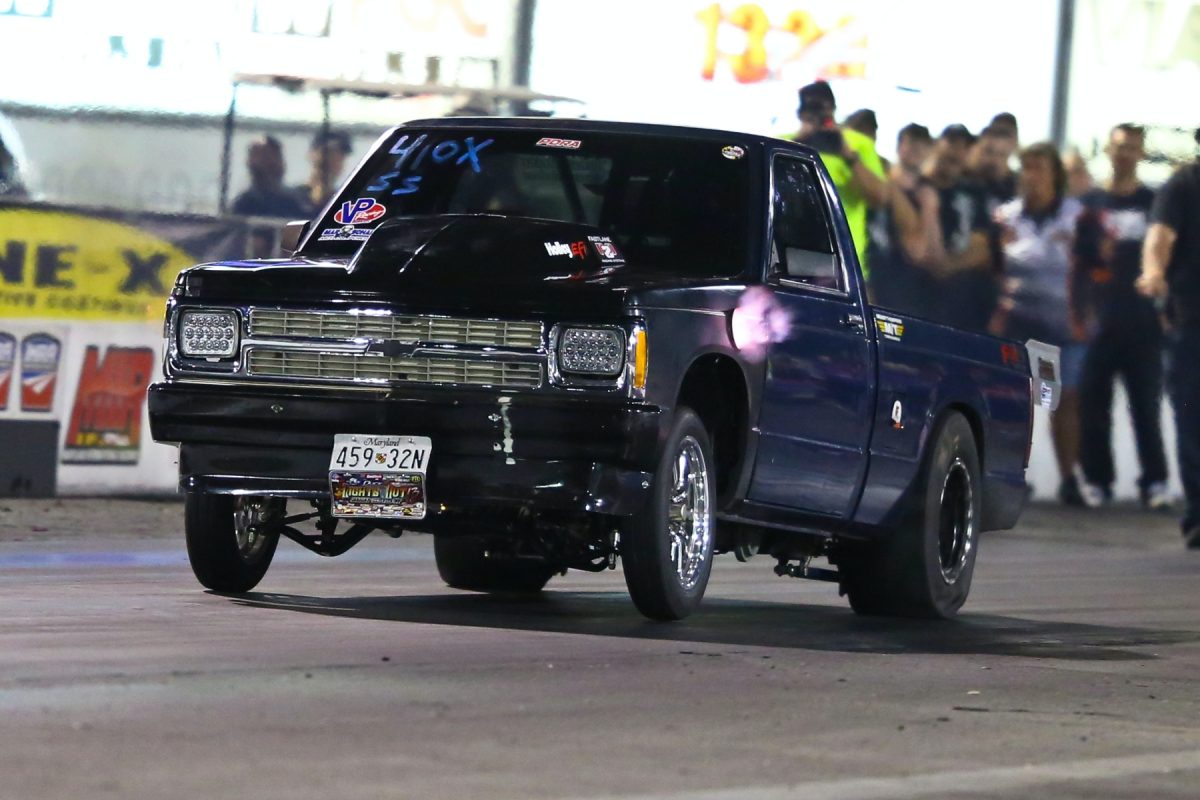 The new Super Street class was created as a place for racers from multiple different small-tire drag radial classes to race on 28×10.5-inch slicks, and the final round showcased that diversity. Ultra Street record holder Wes Ervin lined up against former grudge racer turned X275 class racer Aria Connolly, with Ervin taking the win with his 4.907 at 150.15 in his nitrous-assisted ’88 Chevy S-10. Connolly slowed to a 10.781 at 47.04 in her nitrous-fed ’89 Mustang.

“It’s wild. It’s a different feeling,” Ervin said. “It’s not as easy as everybody said it was going to be. Radials are too easy. They spoil you. You’ve gotta have your stuff together to do this.”

“As of Monday, we didn’t know if we were even going to make the race,” added crew chief Brandon Layfield, who thanked Dave Hanlon, Santhuff, RC Comp, Guy Mancini, and BES Racing Engines. “We didn’t even have a motor in it. Went out to Delmar, tested on Tuesday, moved 50 feet. We felt really defeated. We came here on a limb and it paid off.”

A .002 reaction time in the Elite Top Sportsman final round wasn’t enough for No. 1 qualifier Buddy Perkinson to get thewin over Henry Underwood, as Underwood laid down a 3.902 on a 3.89 dial-in in his ProCharged ’63 Corvette to beat Perkinson’s 3.857 on a 3.82 dial-in in his nitrous-fed LAT Racing Oils ’69 Camaro.

The Top Sportsman 32 final round was over on the starting line when Dickie Smith went .013 red in Mike Corbin’s ’07 Stratus, but North Chesterfield, Virginia’s Robbie Crenshaw was ready with a .010 light and a 4.347 on a 4.34 dial-in in his Albert-powered ’89 Cutlass to grab the win.

Past Elite Top Dragster world champion Steve Furr returned to the winner’s circle for the second time this season on the strength of a superior reaction time in the final round. He left first against Rikki Molnar, then ran a 3.953 on a 3.89 dial-in in his ProCharged ’13 American dragster to defeat Molnar and her 4.227 on a 4.22 dial-in.

The next race on the 2022 PDRA world championship tour is the Drag 965 Summer Shootout presented by Classic Graphix, July 14-16 at Virginia Motorsports Park in Dinwiddie, Virginia.