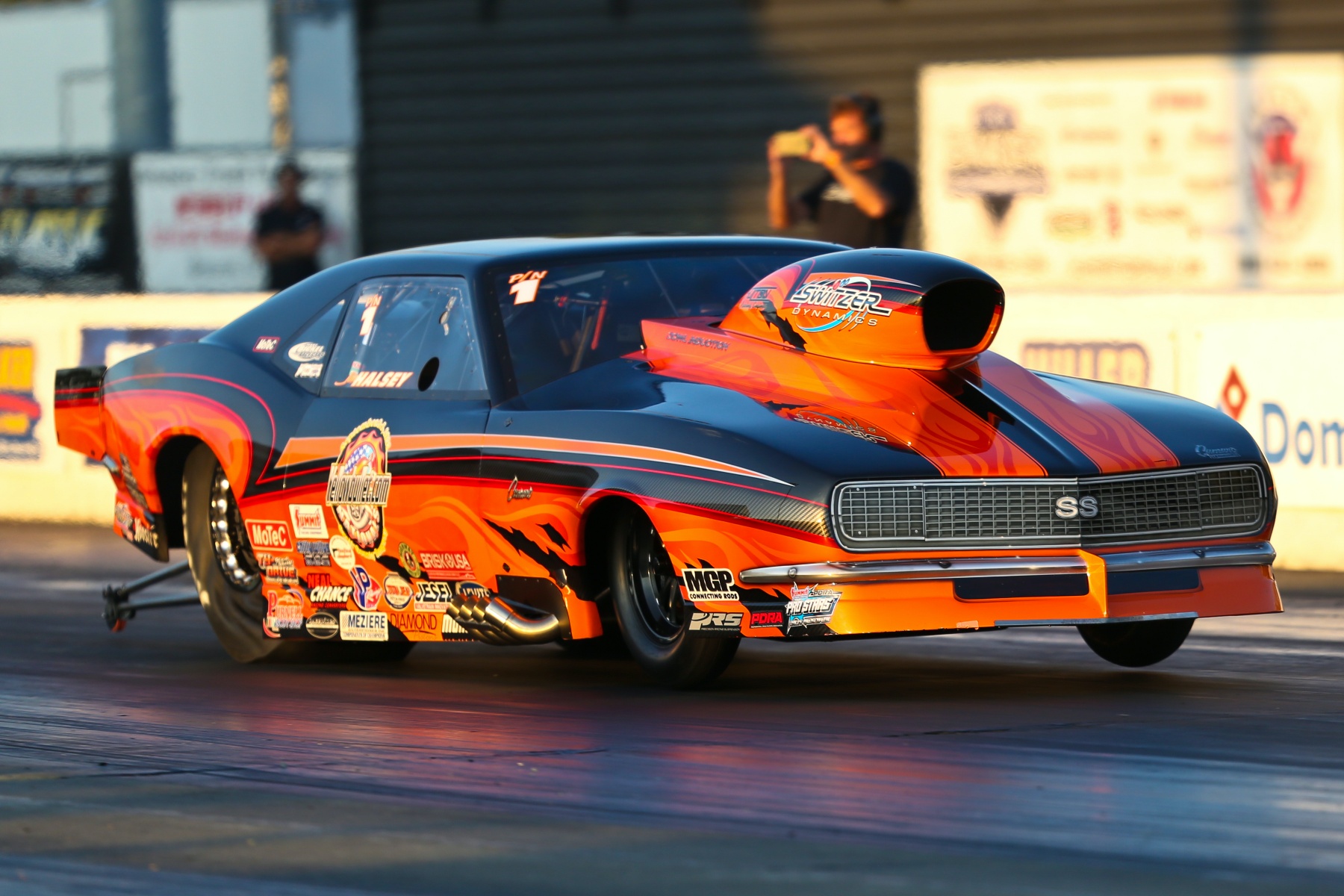 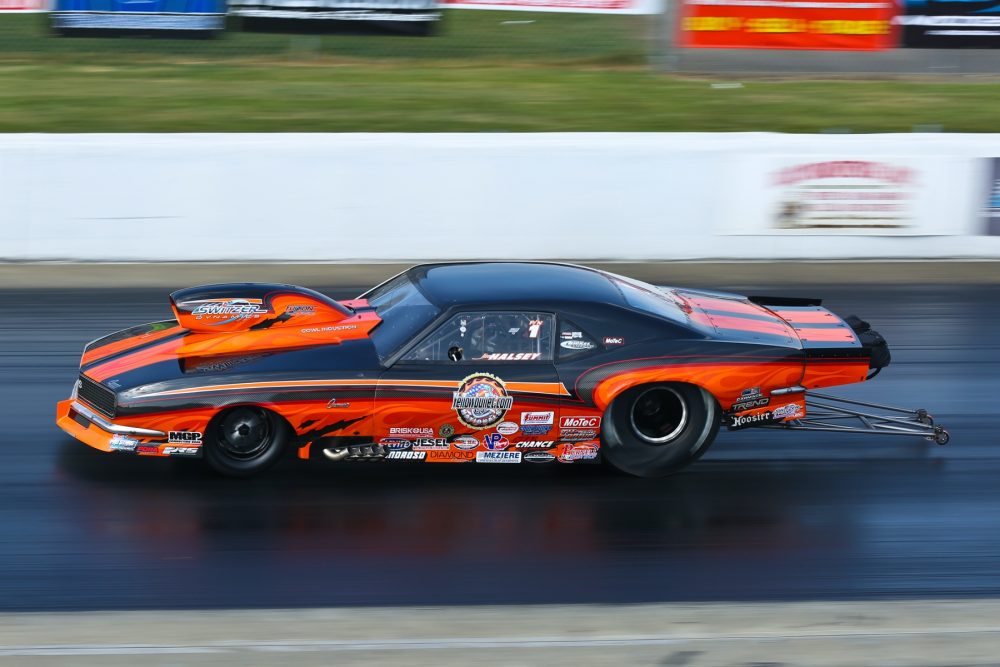 Jim Halsey went into the third and final Pro Nitrous qualifying session in an unfamiliar position, as he went into the session in the No. 2 spot and was bumped down another two spots by the time it was his turn to take to the track. But Halsey and tuner Brandon Switzer stepped up with a 3.64 at 207.72 with the Fulton-powered “Daddy Shark” ’68 Camaro to claim the No. 1 spot.

“We made a run last night that was pretty stout, so we figured we could do it,” said Halsey, the Pro Nitrous points leader. “It was just a matter of everything lining up perfectly. With Brandon punching the keys, it’s pretty relaxing for me. I don’t have to worry about it too much.” 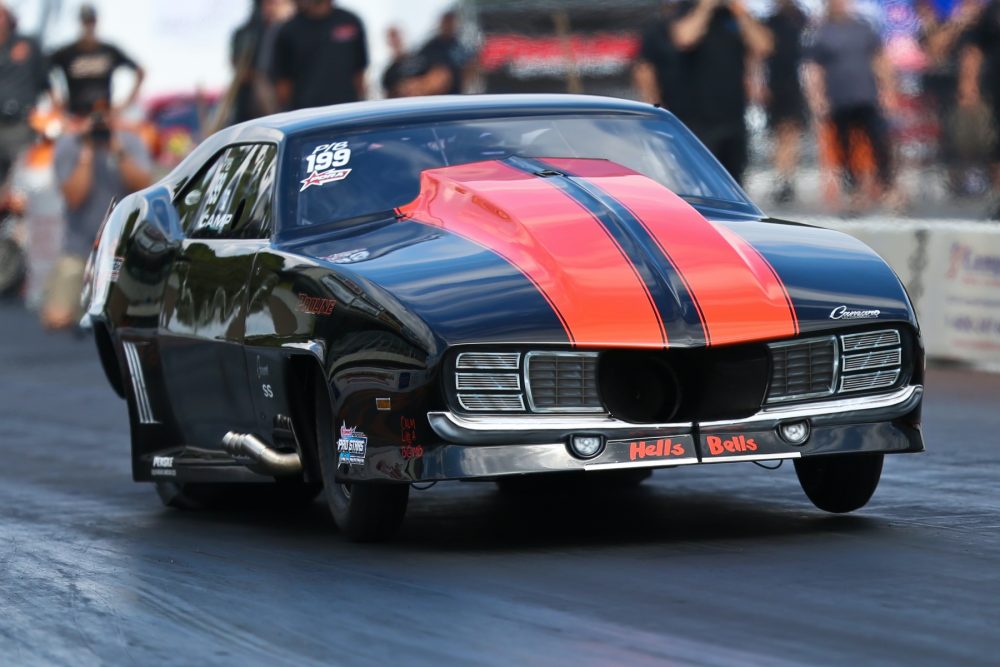 Former Pro Nitrous driver Johnny Camp topped the Pro Boost field for the third time this season, running a 3.618 at 208.01 in his ProCharger-boosted “Hells Bells” ’69 Camaro in the final session. The Canonsburg, Pennsylvania-based driver was also the second-quickest in the first session and quickest in the second session, putting him in a good spot going into eliminations.

“It always feels good going in No. 1, but it also adds a bit of pressure too,” Camp said. “We go round by round. We don’t care who’s in the other lane. We race our lane. I feel confident. We’ve made it down the track every single time. I feel we have as good a chance as anyone here. Shoutout to [tuner] Brandon Stroud, Proline Racing, CT and Chuck and all the crew, and our sponsors, NGK Spark Plugs, Tatman Electric, and ProCharger.”

Points leader Kevin Rivenbark, who severely damaged his ProCharger-boosted GALOT Motorsports ’69 Camaro in a top-end crash during Thursday testing, drove Stan Shelton’s screw-blown Culp Lumber ’19 Mustang to a 3.668 at 206.01 to qualify No. 7. 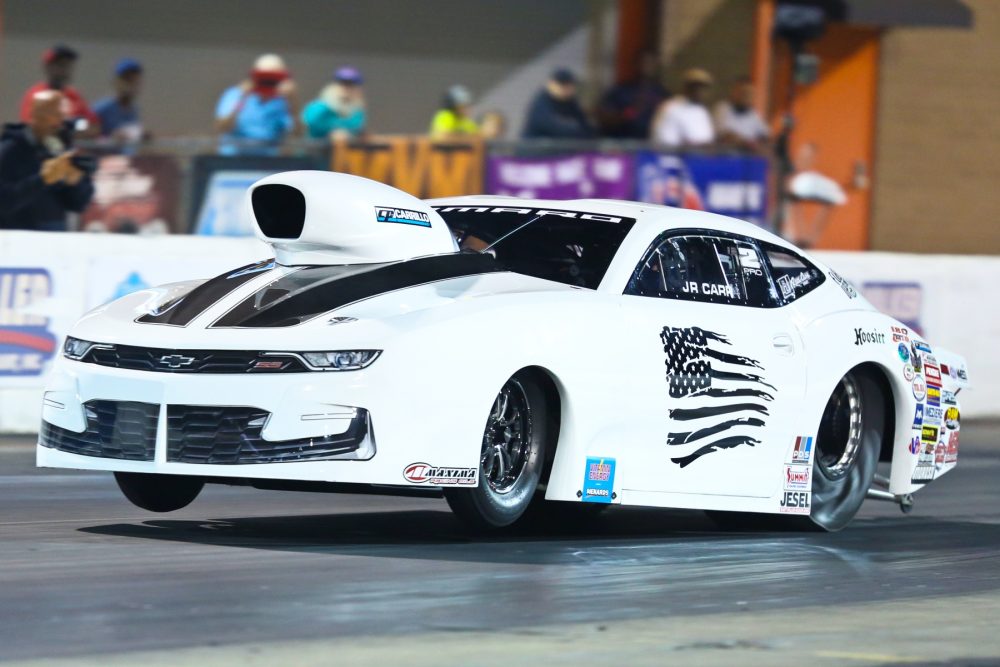 JR Carr has qualified No. 1 in Extreme Pro Stock at all six previous races this season, and he kept that streak alive by posting a 4.033 at 178.24 in the final qualifying session. Driving his Frank Gugliotta-tuned CP-Carrillo/Maxima Racing Oils ’20 Camaro, Carr outpaced Elijah Morton and Gugliotta himself, who’s driving Carr’s second entry. It was a major comeback effort for Carr, who scraped the wall while racing in quarter-mile competition in St. Louis just a few days before DragWars.

“I really wasn’t sure if we were going to pull it off today,” Carr said. “We had two runs with clutch issues and it just wasn’t running like it’s supposed to. Obviously running two cars, there’s a lot more work. I skinned the car up last weekend. [Chassis builder] Rick Jones and the RJ Race Cars crew, they worked overtime two days in a row. They had all the parts in stock. They were there at 5 in the morning and they were leaving at 6-7 o’clock at night. We wouldn’t be here with this car without those guys. There’s no way we could’ve done it. Luckily, there was no structural damage. For what we’ve been through, I’m so tickled and these guys deserve it. Frank deserves it. I drove good. It feels good. We’re happy.”

Morton and Gugliotta both recorded 4.064s to qualify second and third, respectively. Morton’s Allen-powered Morton Brothers Motorsports ’19 Mustang was slightly faster with a 177.42, while Gugliotta’s speed was 176.63 in Carr’s red ’18 Camaro. 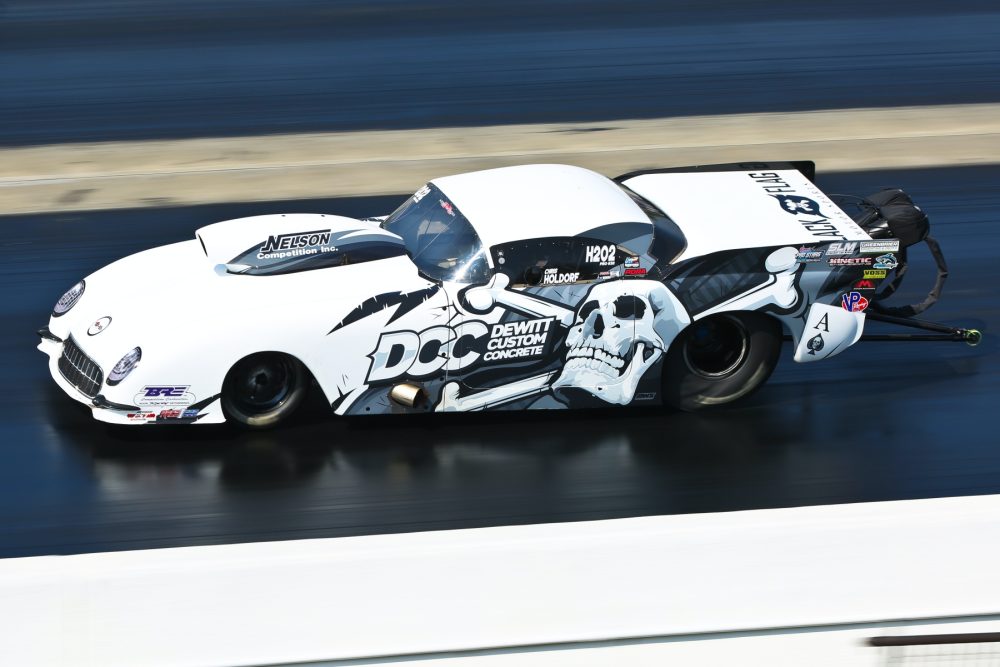 Chris Holdorf has been a consistent player in Pro Outlaw 632 since he joined the class a few years ago, but a No. 1 qualifier award escaped him before DragWars. After driving his nitrous-assisted, Nelson-powered DeWitt Custom Concrete ’53 Corvette to a 4.164 at 169.51 in the final session, the Florida driver will enter eliminations from the No. 1 spot for the first time.

“I think this is actually my first No. 1 qualifier at a PDRA race event, so I’m not used to that,” said Holdorf, who credited tuner Jeff Pierce and workhorse crew member Alan Reynolds. “[PDRA] has done a great job with the rules, keeping the class close. You’ve got multi-kit and single-kit cars right there in the .16s, then Amber [Franklin] is coming right along. Everyone is right there. It’s quite competitive.”

Fellow Floridian Daryl Stewart qualified second with a 4.165 at 170.75 in his HRE-powered Chassis Engineering ’12 Camaro. Defending world champion Wes Distefano ranked third in his Musi-powered $hameless Racing ’68 Camaro with a 4.167 at 171.62. 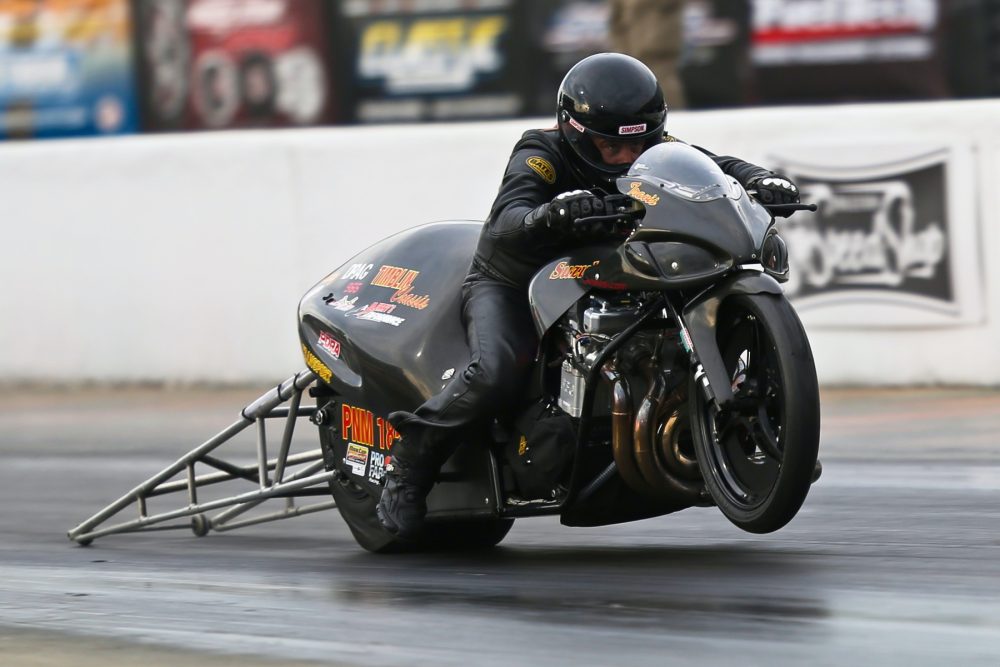 It’s been a couple months since the Pro Nitrous Motorcycle class was in competition, but defending world champion Travis Davis didn’t miss a beat. He ended up in the No. 1 spot after the first qualifying session and kept it up, improving to a near-record 3.951 at 179.33 aboard his Timblin Chassis ’18 Hayabusa to close out the day.

“We come off the trailer today with a .99 in the heat of the day so we knew we had room when the nighttime air came,” said Davis, who thanked his wife, Brandy, and son, Brayden, as well as partners like Monster Race Heads. “I really didn’t change anything on it on the tuneup. I actually took a little power out here and there and let the air come to it. I was kind of surprised it went the .95. If we can get the air back here tomorrow, we may pick at it a little more and try to get Paul [Gast]’s record [3.949].”

John Benoit, who’s qualified No. 1 in Elite Top Sportsman at four of the six races this season, drove his nitrous-assisted, Buck-powered ’17 Camaro to a 3.751 at 204.42 to take the provisional top spot. Chris “Nitrous” Nyerges sits second with a 3.815 at 197.77 in the Buck-powered Schween Motorsports ’20 Corvette. Defending world champion Buddy Perkinson qualified third in his Musi-powered LAT Racing Oils ’69 Camaro with a 3.822 at 194.72.

Alberta, Canada’s Barry Daniluk is just outside the 16-car Elite field with his 4.069 at 178.42, but he’s the provisional low qualifier in Top Sportsman 32 in his naturally aspirated ’68 Camaro.

Blake Denton, driving Tommy Franklin’s Musi-powered American dragster, is the provisional No. 1 qualifier in Top Dragster with a 4.257 at 163.41.