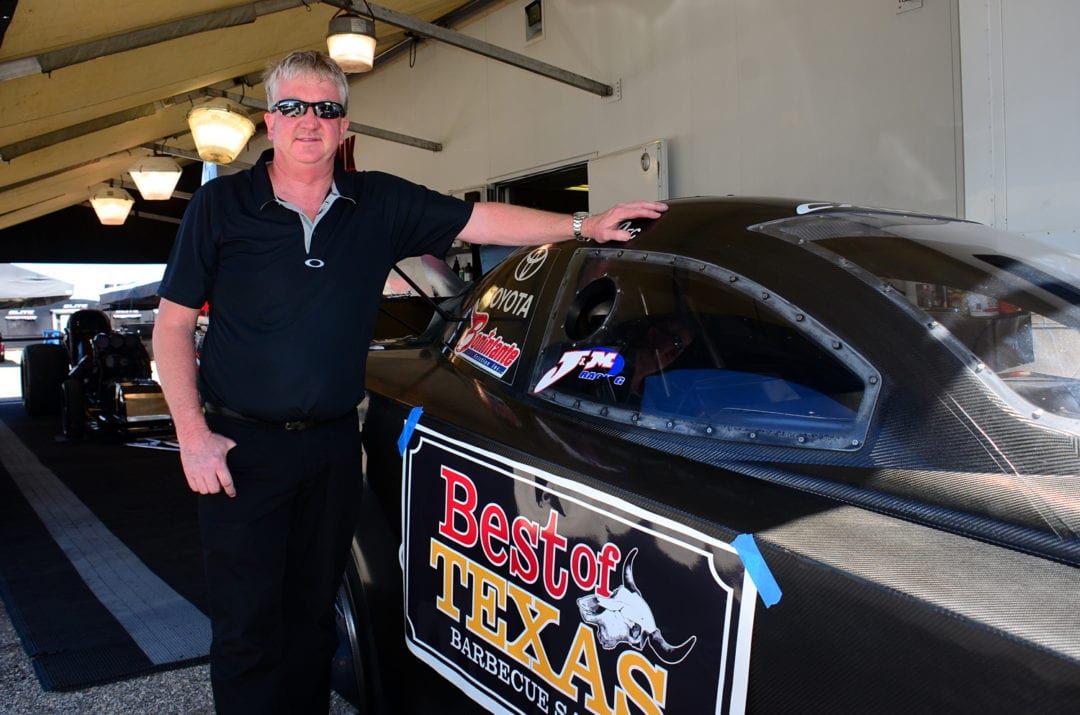 The memories are sweet beneath the Texas Motorplex tower for John Hale, the same passage he’ll roll through several times this weekend buckled into a nitro-breathing Funny Car for Del Worsham Racing during the 33rd annual AAA Texas NHRA FallNationals.

“Long before I made any laps in anything fast I stood out here underneath the tower on a Friday night during qualifying and tried not to get busted for being there without a pass,” Hale recalls from nearly 30 years ago.

“From there I watched guys like Al Hofmann, Chuck Etchells, John Force, Kenny Bernstein, all of those guys back then, and just dreamed about someday being one of them, strapped in, rolling under that tower on a Friday night. And now I’m so happy to say that dream’s come true more than once. So all the history in my drag racing career goes back to that one Friday night underneath that tower here.”

After knocking around the idea of racing with Worsham for much of this year, Hale says he received a call at his home in Addison, Tx., just north of Dallas, with a solid offer from the former Top Fuel and Funny car champion shortly before the FallNationals.

“Del called me last Saturday and it was just a great opportunity. So I said let me talk to my wife and think about it and we put something together pretty quick,” Hale explains. “You know, I love driving these cars, I like staying as current as I can with my license to drive them, and I just don’t know how many more opportunities I’ll get like this, so I just couldn’t pass it up.”

Although Hale brings much-needed funding to the table with his Best of Texas Barbeque Sauce adorning the sides of Worsham’s Toyota-bodied flopper, the team owner stresses that working with a driver means more than just tapping into a deep bank account.

“It requires trust. Especially with this particular car because it’s the same car I won the championship in 2015 with Kalitta, so I have a lot of history with it. It’s a very special car to me and it’s also a very fast car,” Worsham says.

“We do a lot of licensing and a lot of upgrading and I even pondered whether or not I was even going to let anyone else drive this car, but John is an experienced driver, I have confidence in his abilities and he’s from this area and I’d like to see him do well here. I really didn’t have a whole lot of sponsorship for this weekend, but I really felt like the car needs to be run, so everything just makes sense for John to drive it here.”

Hale last raced an NHRA Funny Car for the late Steve Plueger in April last year at Las Vegas, so he’s eager to shake off the cobwebs and get back in the seat. An accomplished sport pilot, too, Hale says he draws on that experience every time he gets behind the wheel of a Funny Car.

“You have seat-of-the-pants feeling in an aircraft that helps you know where it’s going and what to do to correct it and it’s the same thing when driving a Funny Car. I myself like to be strapped in as tight as I can get in the car; I feel like I can drive it better when I feel like I’m almost part of the machine. The airplane is the same way. And you never quit practicing because there’s always going to be something new thrown at you,” he said.

“These cars will throw something new at you, too. They can run good for four or five runs in a row and then suddenly make a hard move on you right at the finish line. That’s when you get out and look at it wondering what the hell all that was about. They can be very unpredictable, but I have a lot of laps in these cars so it should come back to me pretty quickly.”

Despite the new pairing and Hale’s return after a fairly long layoff, Worsham expresses confidence in Hale’s participation this weekend also benefiting him.

“This car is on the verge of making some really good runs and I think John can handle it, he’ll do a good job with it and he’ll treat it as if it was his own, which is the one thing that is really important to me,” says Worsham, whose team also includes a Lucas Oil-backed Funny Car with Jack Wyatt in the seat and a Top Fueler driven by Bill Litton.

“I really think we’ll be able to qualify decent and have a shot at winning some rounds.”

Hale hopes so, too, in order to put on a good show for friends, family and fans. And who knows, he adds, dreams can come true.

“You know, if I didn’t think I could be competitive and have a chance at going rounds out here I wouldn’t even be doing this,” he insists. “I know I’m not the best leaver out here, but I think I can drive these cars as good as most of these drivers when it comes right down to it. I also know I’ll have a good car and if I can get a good light I think I can go some rounds. Sometimes luck does go your way and it can be your weekend, so I hope this one’s mine.”