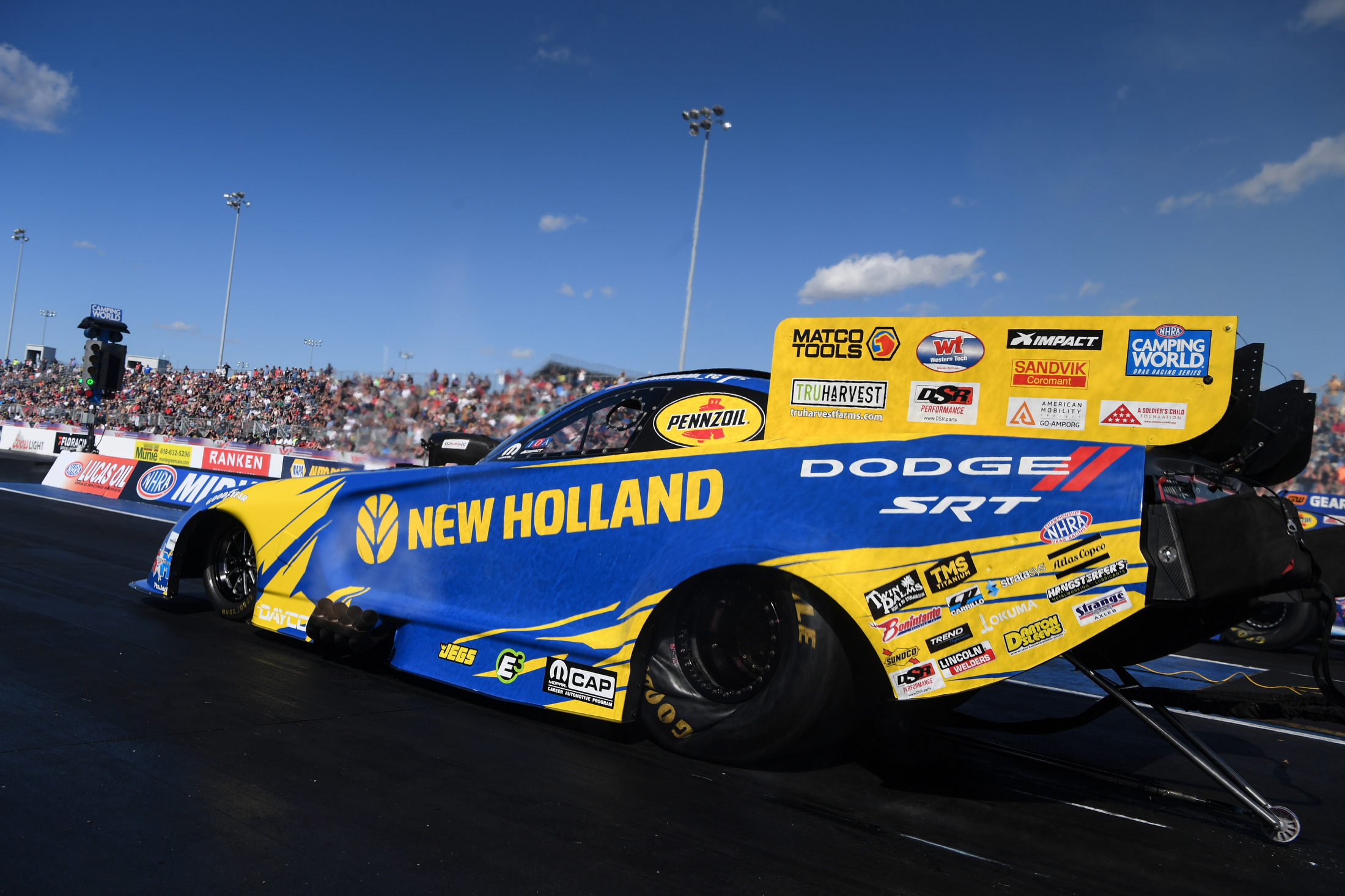 On the final pass of the day, defending Funny Car world champ Matt Hagan and points leader Ron Capps had another thrilling side-by-side run, with Hagan taking the No. 1 position from Capps to secure the top spot on Saturday at the NHRA Midwest Nationals at World Wide Technology Raceway.

Mike Salinas (Top Fuel) and Greg Anderson (Pro Stock) also qualified No. 1 at the 16th of 20 races during the 2021 NHRA Camping World Drag Racing Series season and the third race in the Countdown to the Championship playoffs.

Capps had the better run on Friday, but Hagan had the final say to finish off qualifying in another great side-by-side duel, going 3.868-seconds at 333.25 mph to Capps’ 3.876, qualifying No. 1 in his 11,000-horsepower New Holland Dodge Charger SRT Hellcat Redeye. It gives Hagan his third No. 1 qualifier this season and 43rd in his career as he aims for his second straight world title. Hagan is in his second race back after missing two events with COVID-19 and the team has impressed at every opportunity this weekend, heading into eliminations just one point back of Capps.

“Capps and those boys are throwing down, and our guys are throwing down as well,” said Hagan, who has two wins this season. “I just can’t say enough about (crew chief) Dickie Venables. They’ve got this car on a string and we scooped up a lot of qualifying points. I’m sitting in a race car that is just incredible and it takes everybody to do it. All in all, our confidence as a team is really coming around. It builds my confidence and, without a doubt, we’ve got a car that can win this championship. This thing is really coming together and it’s exciting for our team.”

Capps finished in the second spot, while Bobby Bode’s career-best run of 3.891 at 322.04 from Friday kept him third. Blake Alexander jumped to fourth with a 3.892 and Cruz Pedregon rounded out the top five after going 3.896. 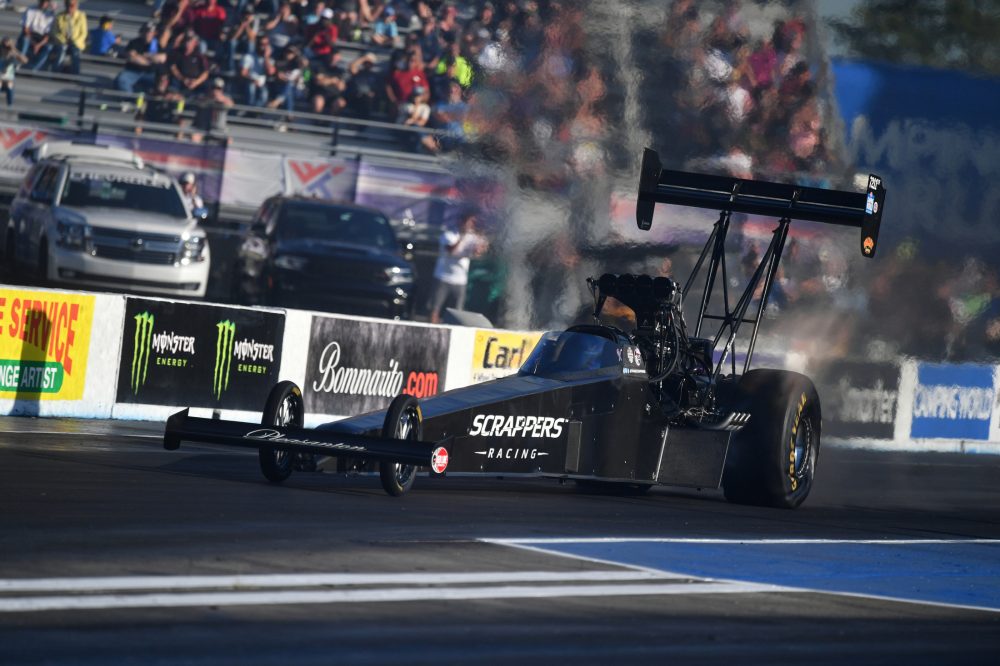 In Top Fuel, Salinas’ incredible run of 3.652 at 327.74 in his 11,000-horsepower Scrappers Racing dragster from Friday held up, though points leader Brittany Force gave it quite a challenge to finish off qualifying. Force went a blistering 3.663 at 330.39 in the final session, but it came up just short of Salinas’ run, snapping her streak of eight straight No. 1 qualifiers, which is a Top Fuel record for a single season. It also gave Salinas his first No. 1 qualifier of the year and seventh in his career, leading the way for a standout qualifying field that saw 15 dragsters run in the 3.60s or 3.70s with a bump of 3.809. That made it one of the quickest fields in Top Fuel history and Salinas will meet Kyle Wurtzel to open eliminations on Sunday.

“We’ve been working on some stuff and I think we’ve got some great things coming our way,” Salinas said. “It was very fast, to say the least, and we know we’re right in the hunt. There’s nobody in the class you can take lightly. It’s pretty impressive how the whole class is racing. They’re not messing around and you better have your ‘A’ game when you’re racing anyone in this class.”

Force finished second in qualifying, while three-time defending champ Steve Torrence is third with a 3.697 at 329.75. Leah Pruett moved to fourth on Saturday with a 3.714 and Billy Torrence rounds out the top five with a 3.717. 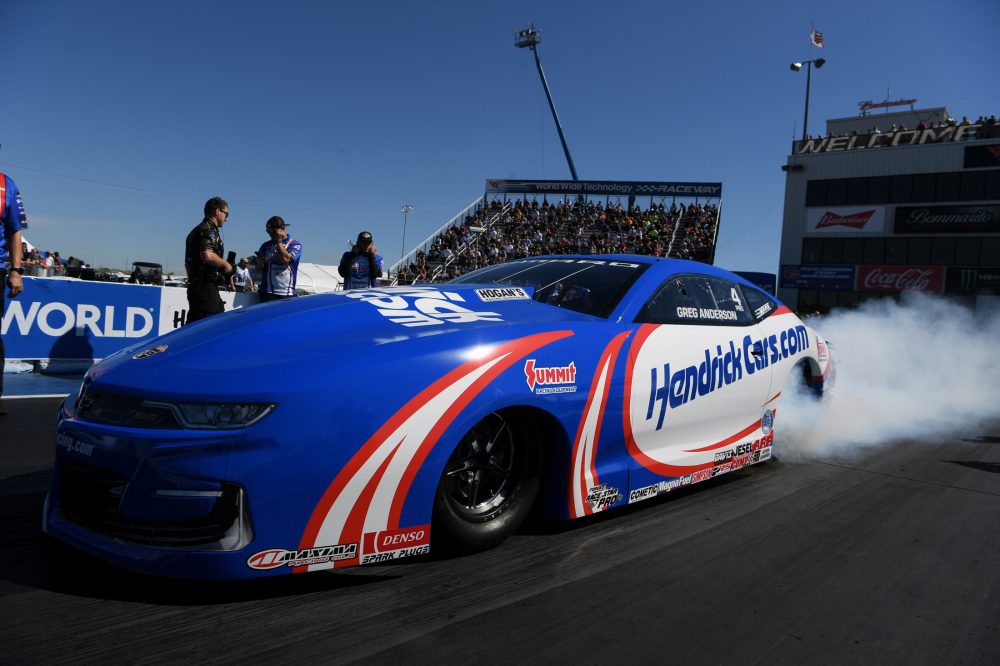 In Pro Stock, Anderson improved on his top run from Friday, going 6.519 at 209.10 in his HendrickCars.com Chevrolet Camaro. The points leader continued to enjoy a tremendous amount of qualifying success in 2021, earning his ninth No. 1 qualifier this season and 115th in his career. He’ll meet Fernando Cuadra in the first round of eliminations, looking for his fourth victory of the season. It would also give him 98 career wins and the all-time record in Pro Stock, and put him a step closer to a fifth world title.

“We hit it pretty good and didn’t leave a whole lot on the table on that run,” Anderson said. “It was pretty darn close to a perfect run and I’ll take that. It was a great day at the office. Both (qualifying) days were a success and we’ll see if we can make day three a success tomorrow. You’ve got a find a way to race your own lane and that’s what the gameplan is. Every race I’ve gone to this year, I’ve had a chance to win. The car has been on point and that’s not a given, so when you get that, you’ve got to be happy. You’ve got to execute and you’ve got to be perfect every time.”

Kyle Koretsky, who beat Anderson in the final round last weekend in Charlotte for his first career Pro Stock win, qualified second with a run of 6.537 at 209.30, while rookie Dallas Glenn went 6.37 at 208.91 to finish third, giving KB Racing the top three spots. Aaron Stanfield’s 6.538 has him fourth and defending world champ Erica Enders rounded out the top five with a pass of 6.545 at 209.49.