With two-thirds of the 2013 NHRA Mello Yello Drag Racing Series season remaining, Matt Hagan believes it’s never too early to count points toward the Countdown to the Championship. 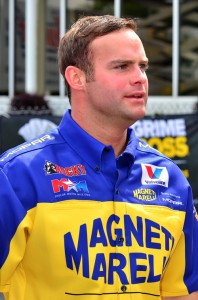 “The points right now are so tight between me, Johnny (Gray) and Cruz (Pedregon), and Ron (Capps) isn’t that far back in fourth so it’s shaping up to be a great points battle,” Hagan said. “I think we are about a round and a half out of first and we need a really good race to remain there in the top three and I don’t want to let Capps get around us.”

Gray, a DSR teammate who has won three titles this year, is atop the standings with 591 points, followed by Pedregon at 581, Hagan at 568 and DSR’s Capps at 512. Each round win during eliminations is worth 20 points.

Hagan will try to use the NHRA Summernationals at Old Bridge Township Raceway Park at Englishtown, N.J., as a rebound from the last NHRA event at Topeka where the team suffered a rare first-round loss.

“Anyone that says they aren’t watching or counting points right now is lying,” he said. “Everyone is worried about points and trying to get that No. 1 spot to have that extra boost once the Countdown starts.

“It’s very important that we do well. There’s no doubt that we have the potential, and I just have to go up there and drive it and not mess up. I think we can do that. 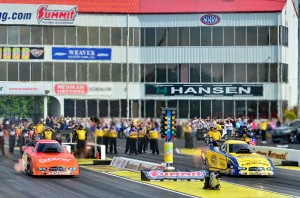 “Like I’ve said before, things aren’t going to go great all the time and it’s about how we bounce back. I think we’ll be fine. It’s not like we’re lost, we just got outrun in Topeka and we’re going to do our best not to let that happen again.”

The teams had Memorial Day weekend off after five consecutive weekends at racetracks, but Hagan couldn’t be more anxious to get back behind the wheel of his 10,000-horsepower Dodge Charger R/T.

“I’m really looking forward to Englishtown. I’m just pumped to be back in the racecar. We have a lot of potential. We just had an off race there in Topeka. We have to roll into Englishtown with one thought in mind and that’s to get out of the first round and keep winning races.”